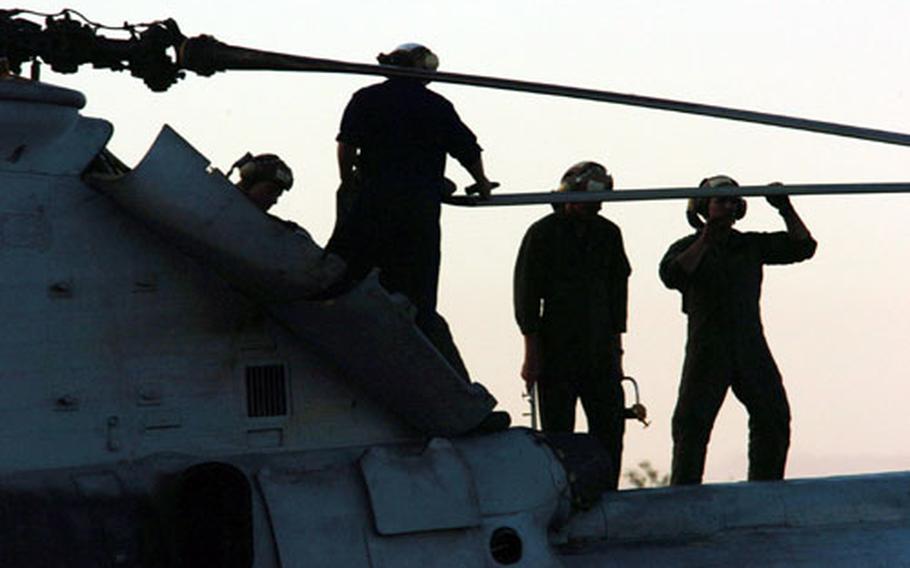 Maintenance Marines of Marine Medium Helicopter Squadron 262 perform an inspection of a CH-46E on Wednesday after a full day of flying supplies to relief centers south of Manila, Philippines. (Jim Schulz / S&S)

Maintenance Marines of Marine Medium Helicopter Squadron 262 perform an inspection of a CH-46E on Wednesday after a full day of flying supplies to relief centers south of Manila, Philippines. (Jim Schulz / S&S) 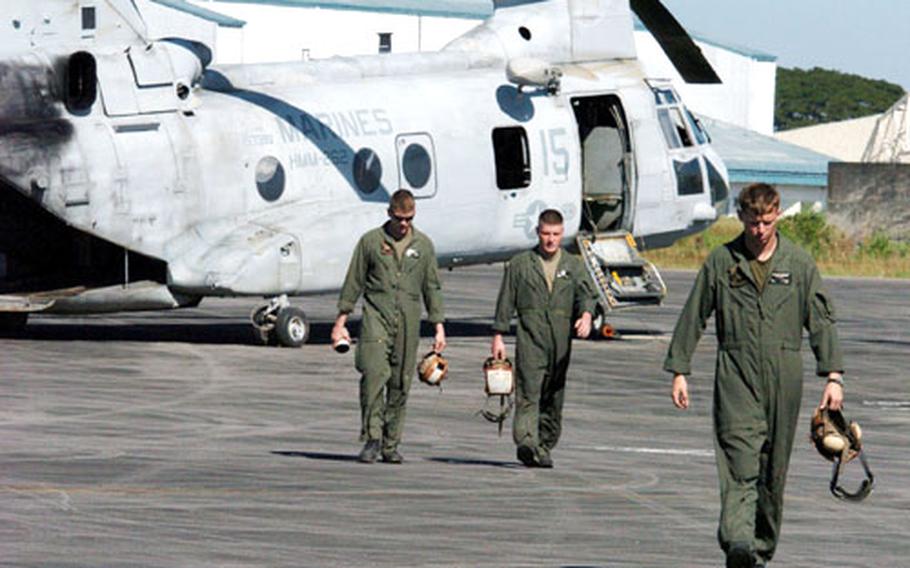 For many maintainers, including these from Marine Medium Helicopter Squadron 262, the work means long hours, but keeping the CH-46E flying is a matter of pride. The 262 Marines are in the Philippines to aid in relief efforts after portions of the country were devastated by violent storms. (Jim Schulz / S&S)

CLARK AIR BASE, Philippines &#8212; Flying up to nine hours a day carrying maximum loads to support relief efforts in the storm-ravaged Philippines could wreak havoc on the Marine Corps&#8217; 40-year-old CH-46E Sea Knights.

But a swarm of aircraft maintainers accompanying them makes sure the strain doesn&#8217;t stop the mission, working as much as 18 hours a day to keep the old birds aloft.

The helicopters, affectionately called Phrogs because they resemble frogs and are amphibious, carry food, clothing and medical supplies to remote communities pummeled by recent storms and mudslides.

For every hour the aircraft flies, about 25 man-hours of maintenance is required. Each day, maintainers arrive to work by 4 a.m. to start the multitude of checks to ready the aircraft, and in the evening they spend hours preparing them for the next day&#8217;s mission.

&#8220;It&#8217;s just on the backs of the maintenance guys that these things are still flying,&#8221; said Maj. Karl Johnson, a pilot and operations officer for Marine Medium Helicopter Squadron 262 from Futenma Marine Corps Air Station in Okinawa.

Some of the six helicopters working in the Philippines have patch marks that aircraft records show are from where bullets hit them in Vietnam. They&#8217;re older than almost everyone in the squadron.

But the aircraft have proved vital in moving supplies to remote communities for the Philippine government.

For the maintainers, the Philippines work is an opportunity to do what they&#8217;re trained to do in a real-life mission, and to help, despite not being on the operation&#8217;s front lines.

Squadron leaders said they hope to get the maintainers out to see some of the damaged sites during their stay in the Philippines. &#8220;It&#8217;s hard when you sit back and work, work, work and never see the results,&#8221; said Warrant Officer Emanuel Young, the maintenance and materiel control officer for the squadron.

Every evening as the aircraft return, maintainers are ready to deal with any repair, from replacing a small part to replacing a hydraulic wire, one of the biggest challenges they might face, Waltz said. They also do routine tune-ups and overhauls.

The aircraft are some of the Marine Corps&#8217; oldest, but they&#8217;re suited for the widest range of missions, from their primary one of moving Marines to the current operation carrying relief aid, Young said.

For all their hours flying, the personnel behind them is what keeps them going.