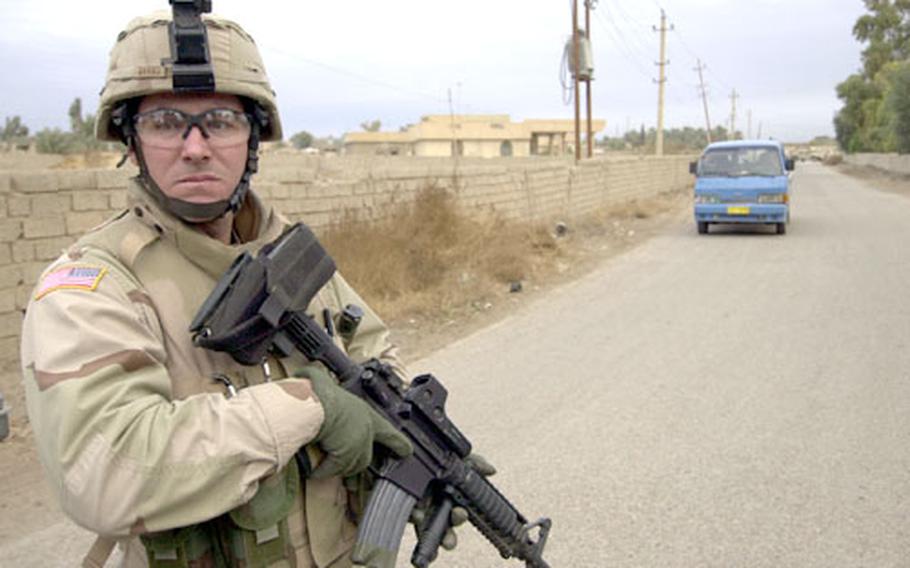 Staff Sgt. Robert Burns of the 2nd Battalion, 156th Infantry Regiment keeps watch during a raid on a farm compound Thursday outside of Baghdad. Intelligence reports said the compound was being used to manufacture roadside bombs, but a search of the area turned up nothing. (Joseph Giordono / S&S)

Staff Sgt. Robert Burns of the 2nd Battalion, 156th Infantry Regiment keeps watch during a raid on a farm compound Thursday outside of Baghdad. Intelligence reports said the compound was being used to manufacture roadside bombs, but a search of the area turned up nothing. (Joseph Giordono / S&S) Members of the 2nd Battalion, 156th Infantry Regiment prepare to raid a farmhouse Thursday outside of Baghdad. (Joseph Giordono / S&S) 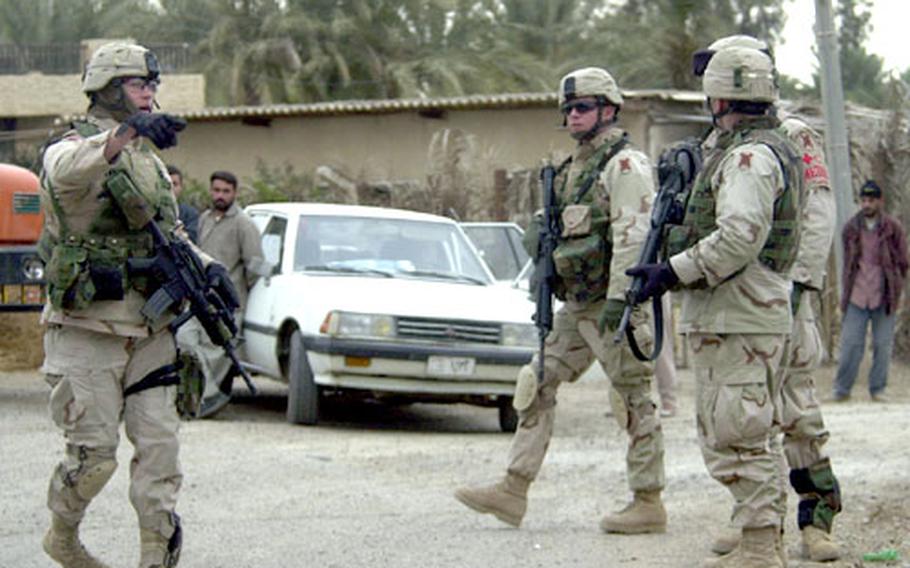 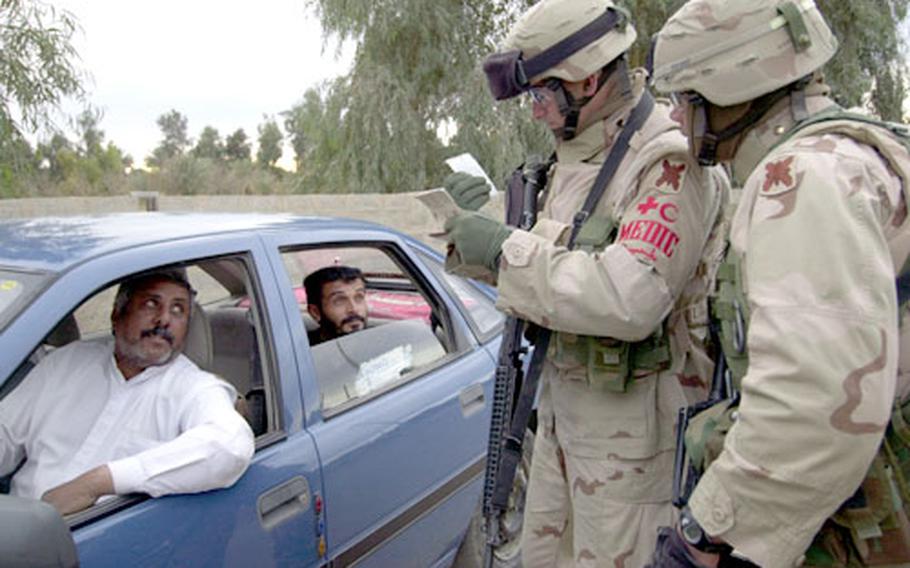 Sgt. Bradford Domingue, a medic, and Sgt. Bryan Fisher, right, check medical documents presented by Iraqi men at a checkpoint outside of a search area near Baghdad. After Domingue determined one of the men had a heart condition and was on the way to the doctor, the vehicle was allowed to pass. (Joseph Giordono / S&S) Two wide-eyed Iraqi children watch as American soldiers search vehicles and direct traffic during a search of a farm compound outside of Baghdad. (Joseph Giordono / S&S)

While one section of troops raids a target, others block off the surrounding area, providing security and trying to deal with the inevitable crowds of onlookers, curious children and agitated locals caught up in the traffic.

That was the case Thursday, when troops from the Louisiana-based 2nd Battalion, 156th Infantry Regiment raided a farm compound northwest of Baghdad. Corps-level intelligence reports said the compound was being used to manufacture and store roadside bombs and that it was being used as shelter by as many as 50 insurgents.

As infantrymen working from Bradley fighting vehicles and Humvees searched the compound, other troops dealt with an increasingly large crowd on the streets outside. The &#8220;Voodoo&#8221; soldiers of the National Guard battalion&#8217;s Headquarters and Headquarters Company tried to manage the traffic, reaching for a balance between providing security, searching vehicles and allowing innocent locals to go about their everyday business.

In a briefing before the raid, soldiers at the checkpoints surrounding the target compound were told to check for identification, search vehicles and allow local traffic to pass through. But once the Iraqi vehicles entered the search area, most couldn&#8217;t find a way out.

So, as the soldiers dismounted and tried to run the checkpoints, more and more vehicles piled up. Small groups of Iraqi men began gathering; conspicuously absent were the crowds of children that usually converge on groups of U.S. soldiers. While the kids can sometimes be a nuisance, soldiers say they&#8217;re more nervous when the kids don&#8217;t show up: It could be a sign, soldiers say, that some sort of attack is imminent.

Sgt. Bryan Fisher, a 31-year-old construction worker from Chalmette, La., and Staff Sgt. Robert Burns, a 36-year-old sheriff&#8217;s deputy from New Iberia, La., chased down a suspicious white truck that kept turning around and trying to find a road out of the area. After a few tense moments, the soldiers determined that the truck was what its two occupants said it was &#8212; a delivery truck full of eggs headed for Baghdad. But because neither man had identification, their photographs were taken and information on who they said they were was recorded.

Inside the compound, soldiers were coming up empty in their search for bomb-making material or men with the surnames Hussein and Wissam, whom intelligence officers had ordered arrested on sight.

Back outside, Sgt. Bradford Domingue, a 26-year-old former emergency medical technician from Carencro, La., was helping on the checkpoints. With a military-issue booklet of Iraqi phrases, Domingue was dealing with three men in a car who said they needed to leave because of a medical condition.

Domingue looked at the medicines they handed over, asked rudimentary questions about their problem and even checked an Iraqi version of a heart-monitor readout.

&#8220;Even the heart strip is confusing,&#8221; he said, as he used a mix of the phrase book and sign language to communicate with the vehicle occupants. Eventually, after a search of the vehicle, the men were allowed to pass.

For the guardsmen of the 256th Brigade Combat Team, the learning curve has been steep. In less than two months in Iraq, they&#8217;ve come to a better understanding of the local culture, they said. But some things are still baffling.

The raid, which kicked off around 2 p.m., finished a few hours later with no arrests or weapons found. But for the soldiers element, the day was far from over. After the other units headed back to base, &#8220;Voodoo&#8221; troops continued on to Sabaa al-Boor, a town U.S. military officials say is being targeted by insurgents for harassment and as a possible safe haven. The town is just east of Fallujah, and some U.S. intelligence officials say some of the insurgents that escaped the assault there earlier this month have moved to Sabaa al-Boor.

Units from the 256th BCT have been focusing on the city, trying to keep it from falling under insurgent influence. So, as darkness fell Thursday night, a few dozen troops went on a walking patrol of the unlit streets.

Just before midnight, they pulled back onto their base at Camp Victory, took off their gear and prepared for another day.