Main gate is upgraded at Guam base 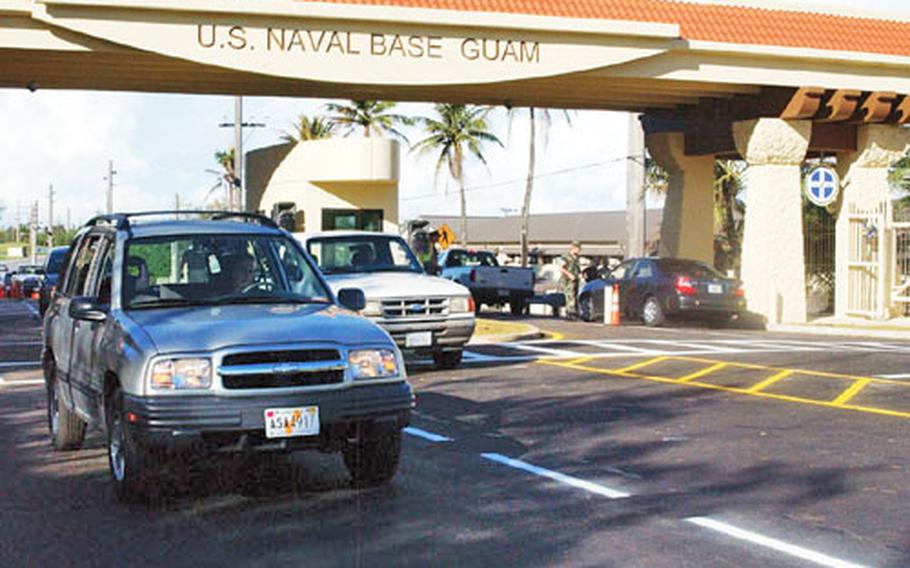 The gate off Marine Corps Drive at the base&#8217;s north end reopened Tuesday after more than a month of construction.

Force-protection upgrades include a new, typhoon-resistant concrete facility that includes a roof, guard house with bullet-proof glass, closed-circuit televisions, a rest room and an emergency generator. The structure is built to withstand up to 175-mph winds, Navy officials said.

&#8220;It&#8217;s partially anti-terrorism, force-protection measures, and it&#8217;s also because we needed a new gate,&#8221; said Senior Chief Petty Officer Jonathan Annis, a spokesman for Commander, Naval Forces Marianas. &#8220;We needed to provide for security forces so they could do their job better.&#8221;

Petty Officer 2nd Class Michelle Fonseca, a master at arms, stood watch at the gate Tuesday and said her eight-hour shift was more comfortable than it used to be.

Navy officials said the Sept. 11, 2001, terror attacks also prompted the need for a more high-tech entrance. Security officers now will be able to read license plates with a special camera and pedestrians enter by swiping their ID cards and walking through a metal gate.

The gate, Annis said, is also much more prominent than the old one. It was easy for tourists to miss the 90-degree turn on Marine Corps Drive just outside the Navy base and end up at the gate, he said. &#8220;Now it&#8217;s very clear that this is a Naval base.&#8221;

Kellog, Brown and Root were the contractors for the project; Annis did not know the source of the construction funding.