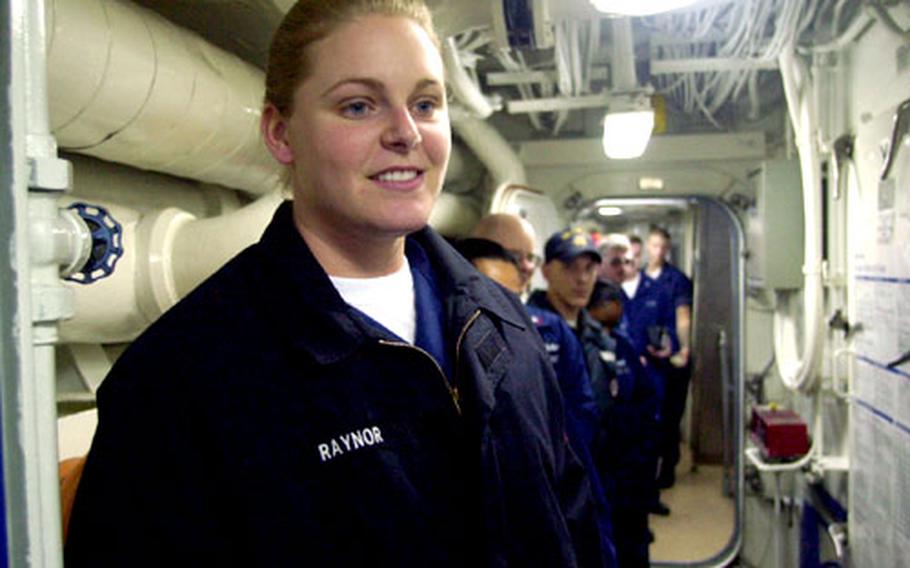 Petty Officer 3rd Class Kirstine Raynor lines up for mail call on the USS Cowpens to see if she has anything from her husband, Petty Officer 2nd Class Charles Cisneros. His ship, the USS John S. McCain, is also in the Persian Gulf. (Kendra Helmer / S&S)

ABOARD USS COWPENS &#8212; The sailors swiftly moved the cargo from a helicopter dropping off new supplies. Then, suddenly, their work slowed, their eyes trained on each passing box.

Any word from home is welcomed by the Cowpens&#8217; 400 sailors, who are in the Persian Gulf as part of Operation Iraqi Freedom. They have been away from their home port of Yokosuka, Japan, for more than two months.

When &#8220;mail call&#8221; is announced, Petty Officer 3rd Class Kirstine Raynor and 20 others scramble to line up. While she exchanges e-mails daily with her husband, a USS John S. McCain sailor, she still rushes to see if he has sent anything from his nearby ship.

Ensign John Cabigon, 24, says he quit rushing to the mail room because the disappointment is too much. The Hawaiian native&#8217;s most recent package: a ukulele.

Cabigon and other sailors said they hadn&#8217;t really thought about the length of time underway. The tight crew is jovial, chatting and laughing in the mess hall and tiny library. Everyone knows everyone on the Cowpens.

And when some are a bit down, people like Holcombe and Petty Officer 1st Class John Moss step in. Moss, 35, the electronics technician, is the leading petty officer for 24 sailors in his division.

Once, he and another jokester cheered up a bummed sailor by sending him all the way forward and aft four times on a pointless errand. By the time the sailor figured it out, he was chuckling to Moss, &#8220;I hate you, man.&#8221;

Mail call is such a big deal because unlike on aircraft carriers, phones aren&#8217;t available for personal calls.

Holcombe, 39, said three to 10 sailors seek out his counsel daily on topics like relationships and religious concerns about their role in a possible war.

Holcombe also arranges for sailors who&#8217;ve had a birth or death in the family to call home. He helped Seaman Greg Otteson after his grandfather died of cancer March 3.

Otteson almost took an emergency flight home, but was bumped by someone with a more pressing emergency.

After dark, when the hallway lights glow a soft red, fewer sailors roam around. At 2 a.m. on a recent night, the normally bustling mess hall was deserted except for four sailors captivated by a card game they couldn&#8217;t walk away from.

Across the hall, Petty Officer 3rd Class Ryan Clark washed dishes as part of temporary duty from his normal electronics warfare job. The constant rolling of the Cowpens is what gets to Clark, 21.

Kendra Helmer is embedded on the USS Kitty Hawk.