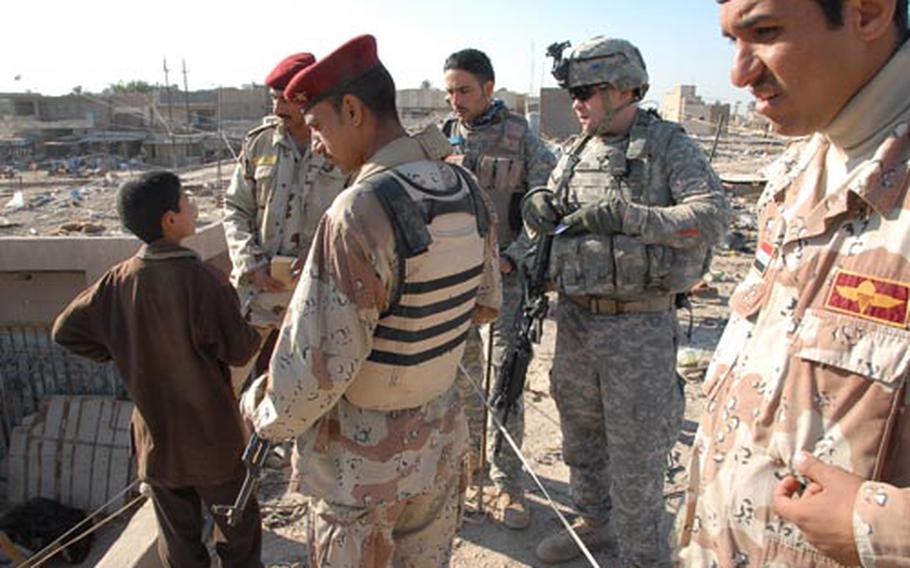 American and Iraqi troops check into reports of a weapons cache atop a building in Mahmudiyah on Tuesday. (Travis J. Tritten / S&S)

MAHMUDIYAH, Iraq &#8212; The string of new intelligence came to Company D late Tuesday morning. The Iraqi army and police in Mahmudiyah were humming with reports about a bomb at a city mosque and a demonstration in the streets.

A mortar round had been discovered on top of the ground but it was unclear if it was wired to detonate, said 1st Lt. Joe Hejda, of 1st Battalion, 63rd Armor Regiment, which is attached to the 1st Armored Division.

It had been months since the company had dealt with a bomb in Mahmudiyah, an area south of Baghdad where violence has plummeted since a brief Shiite uprising in March. Since the past winter, the city had no sniper fire, car bombs or other significant violence and the coalition presence has been reduced from about 3,000 to 1,200, according to the battalion.

Mahmudiyah was bustling with activity Tuesday &#8212; shops were open and the dusty streets were filled with people &#8212; but the greatly diminished local militias and al-Qaida in Iraq are still considered a threat in the area.

Human intelligence on the groups had been pouring into Company D from the Iraqi army, which is the company&#8217;s primary oversight responsibility, said Smith, 29, of Norman, Okla. The company would follow the Iraqi army into the city center to check on the reports, Smith decided.

The local troops have edged toward responsibility in recent months, but are still unpolished.

Their intelligence-gathering was impressive &#8212; beyond what could be imagined just three years ago, said Smith, who was deployed to Iraq in 2005. But there was also inaccurate communication between security groups, causing the bomb information to evolve into a different story by the afternoon, and arguments over turf flared with the Iraqi police.

Hejda said the lower and upper echelons of the Iraqi army are becoming more experienced, but it is in need of a solid noncommissioned officer corps. "It&#8217;s the leaders who are gaining the experience," said Hejda, 24, of Cedar Rapids, Iowa.

The Americans have slowly been ceding more responsibility as the Iraqis&#8217; confidence had been growing. "It&#8217;s like a child learning to ride a bike. When do you take your hands off the seat?" Smith said.

At the Iraqi army station, Iraqi Maj. Dhamad Sheill Manhie told Smith and Hejda that indeed there was no bomb at a mosque. But according to an informant, a weapons cache was found on top of a shop along a main thoroughfare.

Meanwhile, authorities learned that the reported public demonstration had been carried out by a group of high school students who were upset by the confinement of the Iraqi journalist who threw shoes at President Bush during his visit to Baghdad last week.

The Iraqi police was dealing with the weapons cache, Dhamad said. The police taking responsibility was good news since the end goal is to move the Iraqi army out of the city as violence continued to recede, Smith said.

By mid-afternoon, the U.S. and Iraqi soldiers reached the rooftop location where the cache was found. The building&#8217;s front faced a busy main street and shops surrounded it on three sides.

The Iraqi army poked through garbage on the glass-strewn roof and questioned a boy who had found the cache.

But when the Iraqis and Company D returned to the army station, they could hear Col. Wassam, commander of the 2nd Iraqi Army Battalion, shouting from the front step of the compound.

Wassam was angry that the Iraqi police had swooped in that morning and removed the weapons cache from the shop roof without notifying his men.

Smith and Hejda stepped to the side and waited as Wassam berated his men and blew off steam.

"This is good," Smith said, because the army and police need to work out jurisdiction issues.

Wassam quickly calmed and was smiling at the soldiers. Smith clapped him on the shoulder and said the colonel was doing a great job and getting better each day.

At the present rate of improvement, Smith said he hopes the company could make up to a major reduction in Iraqi army support activities over the next five to six months.

"In every category, the Iraqi army has improved ten-fold from three years ago," he said.