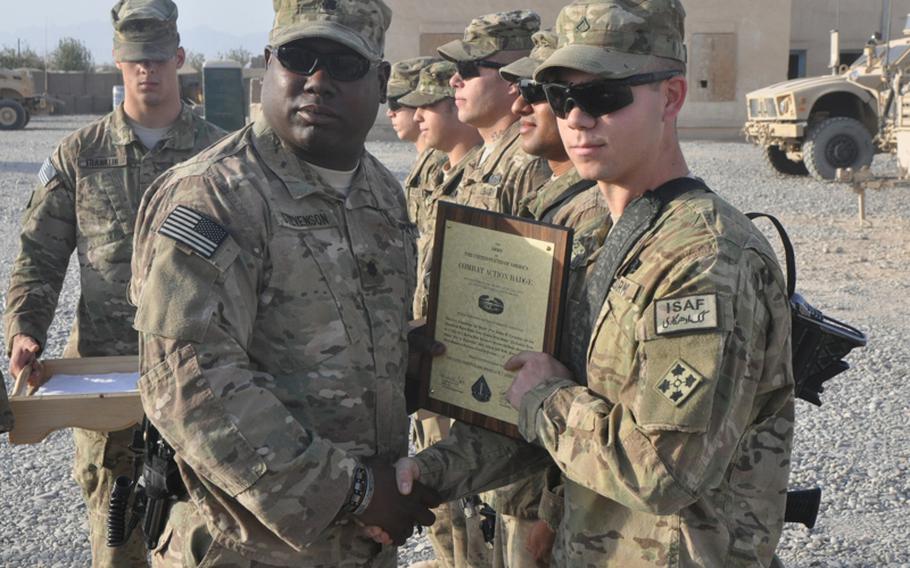 PUSHT ROD, Afghanistan -- To say that Pfc. Joshua Carrington had a bad day on July 21 is like saying the war in Afghanistan hasn&rsquo;t gone as planned. True, yes, but there&rsquo;s a bit more to the story.

The misfortune began soon after Carrington, 20, of Des Moines, Iowa, rolled out with his Company D platoon of the 1st Battalion, 67th Armor Regiment.

Their convoy of MAX Pro MRAPs was rumbling across open fields of moonscape terrain near the village of Pusht Rod, about 10 miles northwest of Farah in western Afghanistan. Carrington sat in the second vehicle. Everything appeared calm.

A 40-pound IED detonated beneath the rear wheels. His helmet smacked the ceiling, but aside from a mild headache, he was unscathed.

Carrington climbed into another MAX Pro and, a short time later, the platoon resumed its patrol. A few hours had passed when the convoy slowed to skirt a large gully.

This time it was a 60-pound IED, and the blast struck near the center of the vehicle carrying him. He blacked out for half a minute and suffered a concussion.

Neither the verbal jabs nor the double dose of explosions deterred him. Ten days later, on July 31, he joined his platoon on another mounted patrol.

You can guess what happened.

An 80-pound IED gave Carrington a second concussion and ended his patrol days. He has since pulled duty as a radio operator at Combat Outpost Pusht Rod, Company D&rsquo;s base.

During a brief ceremony there last month, Lt. Col. Patrick Stevenson, team commander of the 2nd Special Troops Battalion, presented a Combat Action Badge to Carrington, who had received a Purple Heart a few weeks earlier.

&ldquo;I&rsquo;d like to be going out with the guys,&rdquo; he said. &ldquo;I get a little restless.&rdquo;

The garrison&rsquo;s tactical operations center resembles that of most other bases, with plywood walls, large video monitors and command staffers hunched over laptops.

Among the usual collection of military manuals and mission reports is a copy of &ldquo;The 27 Articles of T.E. Lawrence,&rdquo; a tract that appears on the U.S. military&rsquo;s counterinsurgency recommended reading list and has served as a cautionary tale for the Army in Afghanistan.

The British military officer, deified in David Lean&rsquo;s 1962 film &ldquo;Lawrence of Arabia,&rdquo; published his essay in 1917. The &ldquo;articles,&rdquo; more aptly described as 27 suggestions &ldquo;expressed in commandment form,&rdquo; in Lawrence&rsquo;s phrase, provide direction on working with Arab armies based on his experience during the Arab Revolt.

American military strategists have attempted to apply those lessons in Afghanistan, with distinctly hazy results. One item in particular looms as painfully relevant as the U.S. withdraws troops and struggles to calibrate its &ldquo;success&rdquo; during the decadelong war.

&ldquo;Do not try to do too much with your own hands,&rdquo; Lawrence wrote. &ldquo;Better the Arabs do it tolerably than that you do it perfectly. It is their war, and you are to help them, not to win it for them. Actually, also, under the very odd conditions of Arabia, your practical work will not be as good as, perhaps, you think it is.&rdquo;

Never mind the gunshotsI thought of Lawrence&rsquo;s advice when officers in the tactical operations center received word of gunshots not far from the garrison one evening around 6 p.m.

Troop B shares the base with a unit of the Afghan National Army. First Lt. Larry Klipfel, 24, of Aberdeen, S.D., walked over to the quarters of the Afghan commander to discuss whether Afghan soldiers should head out to investigate.

Klipfel knocked and the commander rose from his cot with a yawn, eyes glazed from sleep.

Another Afghan officer had told Klipfel that the gunfire may have come from Afghan soldiers shooting into a dry riverbed for target practice, or possibly from a wedding party celebration.

&ldquo;Do you want to send some of your guys to check it out? To make sure?&rdquo; Klipfel asked.

The commander rubbed his chin for a few moments. &ldquo;No, I don&rsquo;t think it&rsquo;s necessary,&rdquo; he finally said.

The two men smiled and shook hands. Klipfel began walking back to the operations center. The commander returned to his cot.