Magazine cover brings whirlwind of fame and attention to soldier 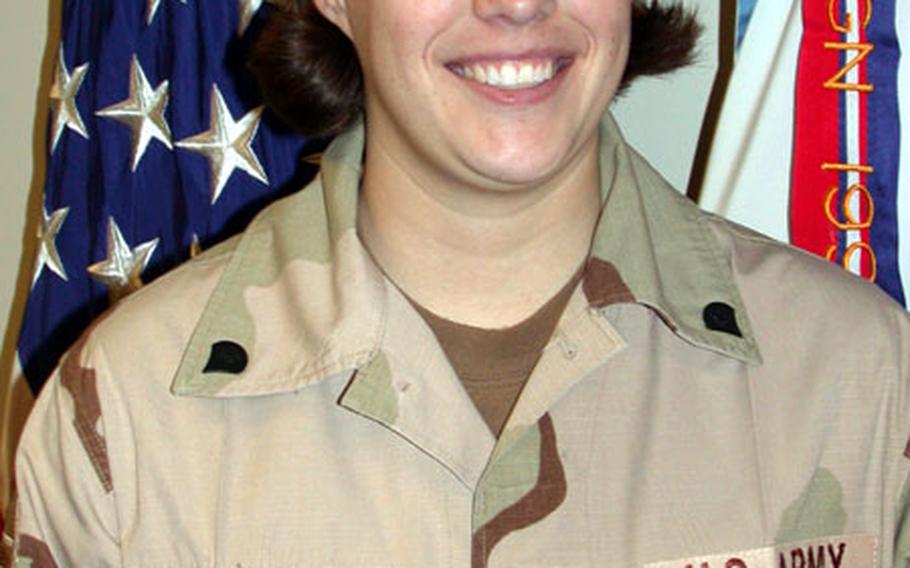 Spc. Billie Grimes, one of three 1st Armored Division soldiers featured on Time Magazine’s “Person of the Year” cover in December, during a Monday visit to the Pentagon. (Lisa Burgess / S&S)

The trio was chosen to represent all American soldiers. But inevitably, the spotlight has shone on the individuals featured on the popular weekly&#8217;s most prominent issue of the year.

Ever since the magazine hit the newsstand, Grimes&#8217; life has been a whirlwind of interviews, television appearances, and meetings with high-ranking officials and celebrities.

She, Whiteside and Buxton were guests of President Bush at his Jan. 20 State of the Union address. The trio rang the opening bell on Wall Street in New York. They&#8217;ve met with Army Chief of Staff Gen. Peter J. Schoomaker, Acting Army Secretary Les Brownlee and a host of other Army brass.

And the press junket was supposed to culminate on Sunday with a half-time appearance at the Super Bowl, but that&#8217;s been nixed, Grimes said.

Grimes will get her wish after a concert appearance with country singer Toby Keith in Houston on Saturday night.

A quiet, thoughtful young woman, Grimes chose the Army in May 2002, after a four-year stint in the Army Reserve.

She arrived in Friedberg, Germany, in July 2002 to sign in with her current unit, which was sent to Iraq less than a year later, arriving in Baghdad in early June.

In Iraq, they stay in the Azimiya Palace, a compound in the restive Adhamiya neighborhoods that has been mortared and shot at repeatedly.

Grimes has been on at least two patrols that ultimately resulted in severely injured or dead U.S. personnel, including a Nov. 1 patrol that cost the life of the platoon&#8217;s popular leader, 1st Lt. Ben Colgan.

She was also there on Dec. 10, when Time reporter Michael Weisskopf and photographer James Nachtwey were injured after someone threw an explosive into their Humvee.

Weisskopf lost his hand after attempting to toss the grenade away; Nachtwey had shrapnel injuries, as did two of the platoon&#8217;s soldiers.

Grimes first got the news that she was on the cover while in Kuwait, where she was on the first leg of a scheduled two-week R&R to see her family in Lebanon, Ind.

She soon found out.

Grimes said she doesn&#8217;t anticipate any envy from her unit mates when she gets back, although she knows she&#8217;s going to get plenty of ribbing.