Maemi to pound Korea in midst of Chusok 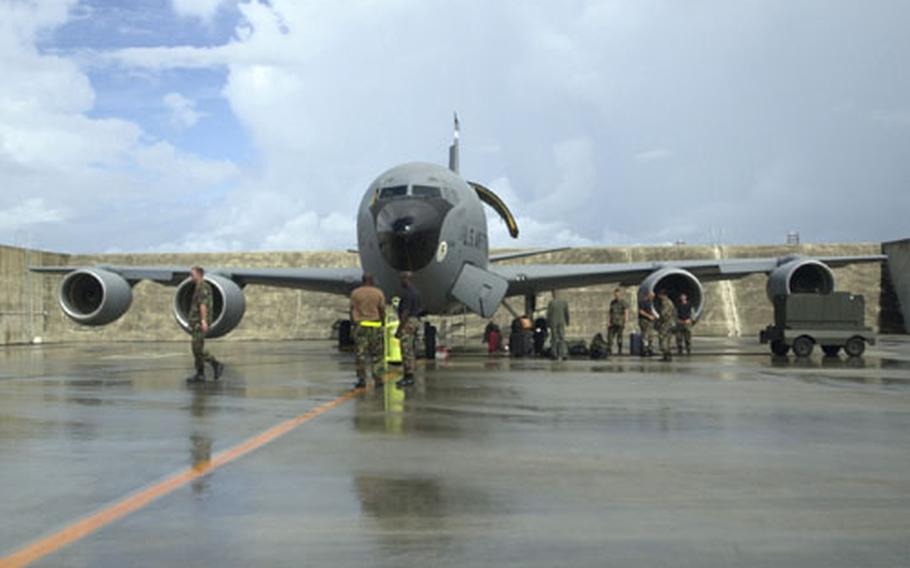 SEOUL &#8212; Super Typhoon Maemi, packing winds up to 150 mph, has taken a turn north and currently is projected to pass within 10 miles of Pusan, military weather forecasters said Wednesday.

The storm, named after Korean cicadas that supposedly warn of coming typhoons, is expected to come closest to U.S. bases in Pusan and Taegu in Saturday morning&#8217;s early hours.

Maximum winds in Area IV, which includes most of southern South Korea, are expected to hit more than 75 mph by late Friday. A forecaster with the 607th Weather Squadron at Yongsan Garrison said Pusan and Taegu could expect up to eight inches of rain Friday and Saturday.

Farther north, areas such as Osan Air Base and Yongsan Garrison will see the onset of heavy rains Friday morning. Forecasters expect from 1 to 3 inches of rain for Areas I and II.

The heaviest rains and winds are forecast to abate by around 3 a.m. Saturday, forecasters said.

That includes pre-positioning sandbags in low-lying areas and securing any items that could cause damage in winds or heavy rain. The last major storm that hit the area was Typhoon Rusa last September, Jackson said; it dumped up to 3 feet of rain and killed four South Koreans.

Super Typhoon Maemi could wreak havoc with Chusok travelers who celebrate the traditional Korean harvest season by traveling to their hometowns. Millions of South Koreans have left Seoul for the three-day holiday, and the heaviest return travel days were expected to be Saturday and Sunday.

&#8220;We are advising homebound travelers to take extreme caution as the typhoon may be headed this way over the weekend,&#8221; said Kim Tae-ryong, a spokesman for the Korean Meteorological Administration.

&#8220;We are expecting the worst of it Friday and Saturday, when most people start their trip back home.&#8221;

Originally, Maemi was forecasted to pound Okinawa, then bear down on Sasebo Naval Base in Japan.

On Wednesday morning, the super typhoon was approximately 236 miles south-southeast of Okinawa, having traveled northwestward at about 9.2 miles per hour overnight, according to the Joint Typhoon Warning Center&#8217;s Web site.

At that time, the storm was forecast to continue steering northwestward for the next 36 hours, the JTWC site stated.

By 10:30 a.m. Wednesday, Maemi had drifted to the west and was predicted to pass 84 miles from Sasebo &#8212; putting Taegu directly in its path.

Sasebo moved into Tropical Cyclone Condition of Readiness III Wednesday morning and remained there Thursday morning. A decision about whether to change the readiness level was expected around noon Thursday.

Based on that forecast, Iwakuni expected to receive winds of up to 40 mph with gusts from 58 mph to 69 mph early Saturday morning.

Fulton said commands on base were being notified Wednesday to begin preparing for the storm, and residents were being advised to move loose objects indoors, out of the path of high winds.

TCCOR II: Winds of 50 knots or greater are anticipated within 24 hours. Recommended: Ensure sufficient cash and important documents, such as passports, are handy in case of evacuation; locate and check flashlights.

TCCOR I: Winds of 50 knots or greater are occurring or are imminent within 12 hours. Recommended: Move high-value items to center of room away from windows and doors; keep mops, rags and buckets handy; remain indoors away from windows; stay tuned to closed-circuit TV or portable radio for information.