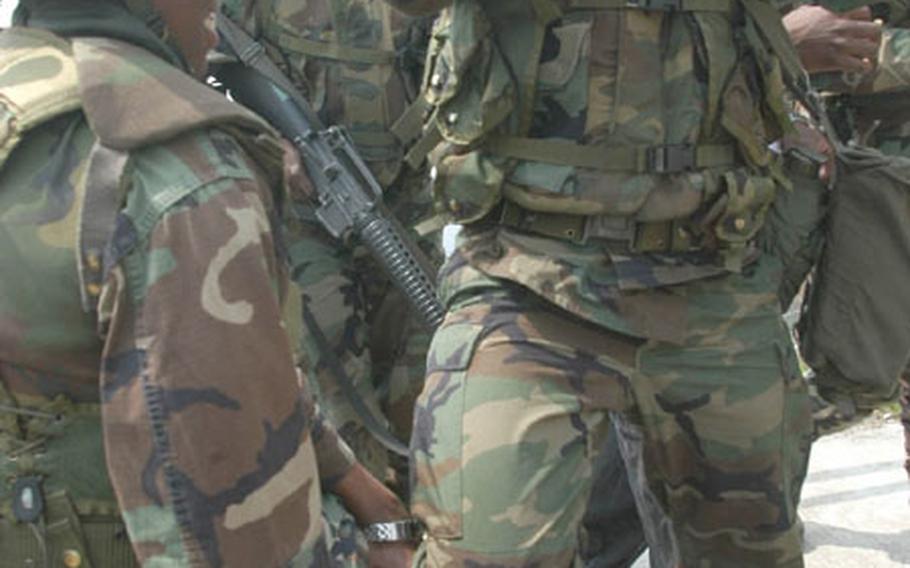 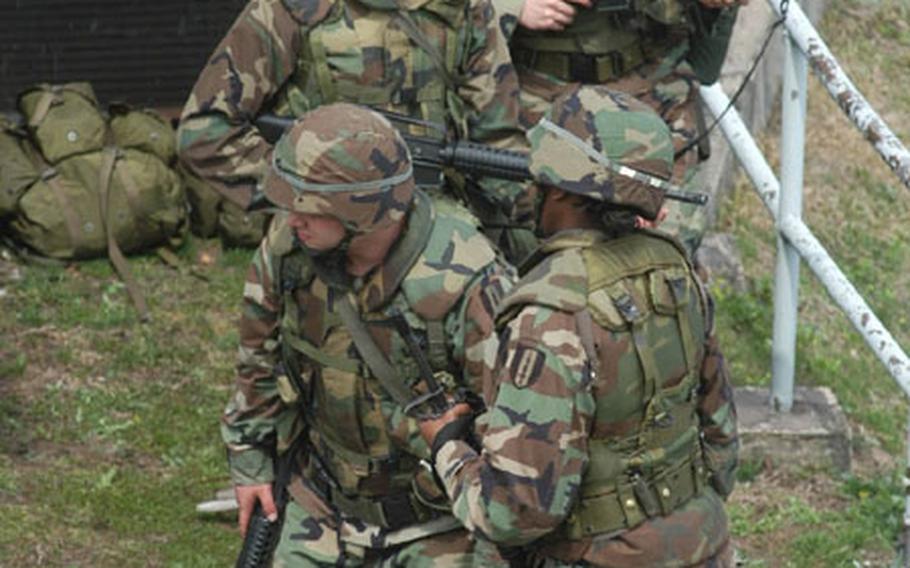 Soldiers with the 362nd Signal Company practiced base defense Monday with other basic soldiering skills at Madison Site, a microwave signal relay site on top of Kwangyo Mountain near Suwon. Madison Site is one of the last U.S. "manned hilltops" in South Korea. (Jeremy Kirk / S&S) 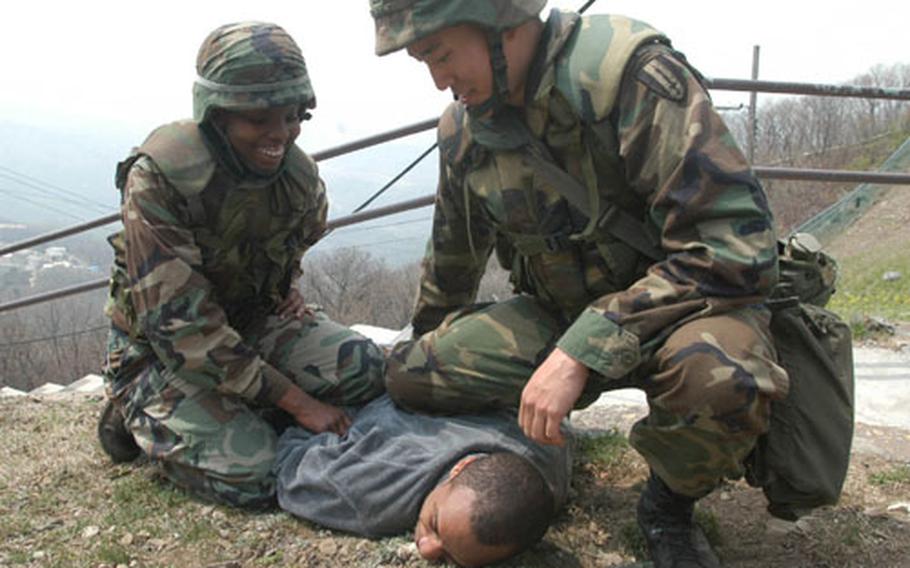 Pfc. Lateidria Mitchell and Pfc. Lee Jin-ho detain Pfc. Paris Woods, who played the role of an infiltrator at Madison Site, a microwave signal relay site on top of Kwangyo Mountain near Suwon. The hilltop site commands a great view of the surrounding area, although Pfc. Woods isn&#39;t particularly in a position to enjoy that view. (Jeremy Kirk / S&S) 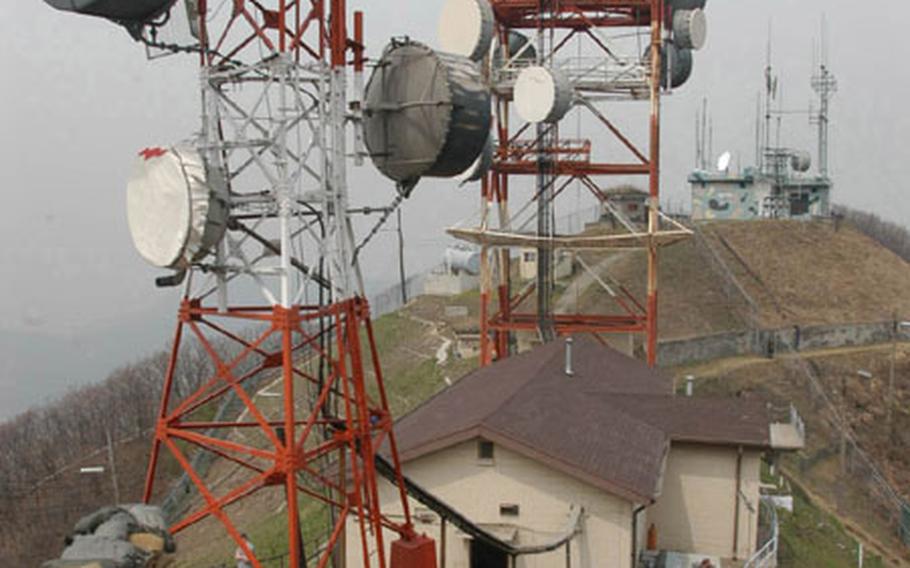 Madison Site, a microwave signal relay site on top of Kwangyo Mountain near Suwon, and one of the last "manned hilltops" in South Korea. (Jeremy Kirk / S&S)

He was the enemy, albeit a fashionable one. And he wanted in. Now it was up to soldiers from the 362nd Signal Company to repel or detain the rebel, part of a base defense exercise that would be their job if the country went to war.

The Madison Site is a microwave signal relay station on the top of Kwangyo Mountain near Suwon. It&#8217;s one of only a few the Army still staffs 24 hours a day, monitoring the re-transmission of crucial signals otherwise muffled by South Korea&#8217;s mountains.

Three to five soldiers actually live on Madison Site, which consists of a lower base camp with a dining facility and barracks and an upper site with antennas and microwave relays.

The lower camp is accessible by vehicle &#8212; a lazy, curvy drive up a mountain pass. But the upper camp can be reached only by helicopter &#8212; or the more common method: a good pair of combat boots.

Different soldiers have different thoughts on exactly how many stairs separate the base camp from the top of Madison. Capt. Michael A. Ball, company commander, will tell you the climb is 613 steps: &#8220;It&#8217;s a significant emotional event.&#8221;

Add a rucksack and the jaunt becomes draining. Soldiers who staff the site during the day usually bring food with them since the dining facility &#8212; an award-winner considering its small size and clientele &#8212; is at the lower camp.

At night, the site is run by Korean technicians, some of whom have worked for the Army for decades, Ball said. The camp is peaceful and quiet, with gentle fresh air breezes and a panoramic 360-degree view.

Spc. Gerardo Salinas, who arrived at Madison just a few weeks ago, still is adjusting to the slower pace. The microwave technician said he initially was &#8220;bored out of my mind.&#8221;

But the small camp has amenities: a pool table, a day room, a workout room and a basketball court. Soldiers can take a cab into the nearby community to catch a movie.

For Sgt. Christopher Davidson, the remote camp almost has become home. Davidson, who walks slowly with a cane after a nasty inline skating accident broke both bones in his lower leg, has integrated himself into the local community as a disc jockey.

He DJs weekly at a hotel, has a Korean girlfriend and even acquired a dog, Mia, who faithfully follows him while growling at strangers. He&#8217;s got three rooms to himself in the barracks, and by day works as the dining facility&#8217;s noncommissioned officer in charge.

And Pfc. Paris Woods, who played the role of would-be infiltrator last week?

He got inside the camp, but it got ugly from there. Numerous soldiers pointing automatic weapons quickly pinned him down &#8212; but that didn&#8217;t stop Woods from making a final attempt at mayhem, scurrying away a second time.

The short scenario demonstrated the numerous dangers in taking someone captive. For instance, Ball, the company commander, pointed out, if holding a weapon, you should stay at least a few feet away from the detainee lest he or she get control of your gun.