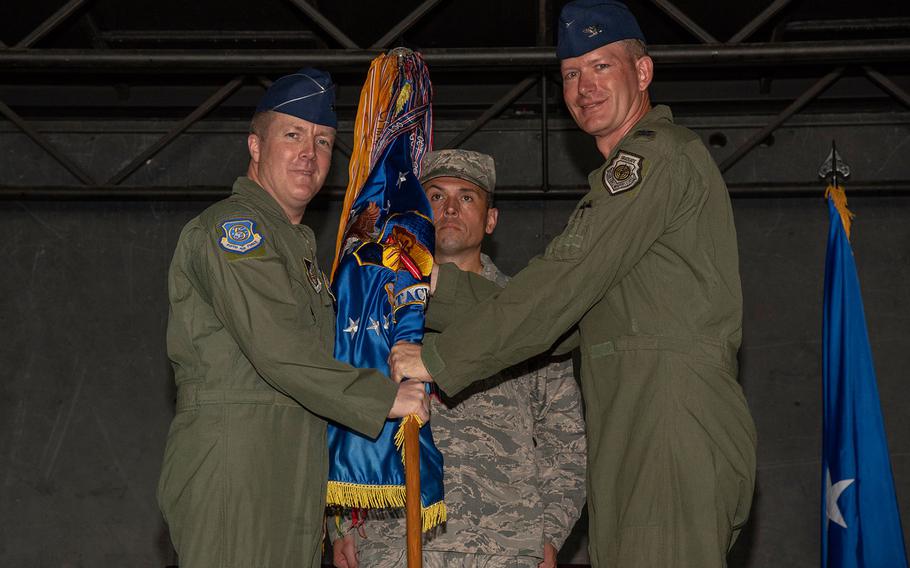 An award-winning aviator has assumed command of the 3,900-strong 35th Fighter Wing at Misawa Air Base, Japan.

Col. Kristopher Struve became the wing’s 66th commander Monday when he accepted the unit colors from Col. Scott Jobe during a morning ceremony at a VIP hangar on base.

“I ask you to serve with honor, excellence, and the drive to win,” he told troops assembled for the ceremony, according to an Air Force statement. “My job is to ensure you have everything you need to complete the mission.”

It’s Struve’s third assignment at Misawa and his fourth in Japan. During previous tours he served as a flight commander, wing weapons officer, director of operations and a squadron commander.

Struve’s most recent assignment was leading the 8th Operations Group at Kunsan Air Base, South Korea.

Struve won the prestigious Mackay Trophy for the “most meritorious flight” of 2007. The award recognized Struve’s 11-hour mission in an F-16 Fighting Falcon launched from Iraq in support of ground troops in Afghanistan and covering the same distance as a round trip from Los Angeles to New York.

Jobe’s next assignment takes him to the Pentagon, where he will serve as chief of the Program Integration Division.

“The special relationship Team Misawa members have with their local counterparts has certainly flourished under Jobe’s leadership,” Brig. Gen. Todd Dozier, 5th Air Force vice commander, who presided over the change of command, said in an Air Force statement. “In short, Jobe has left the 35th [Fighter Wing] in outstanding shape.”