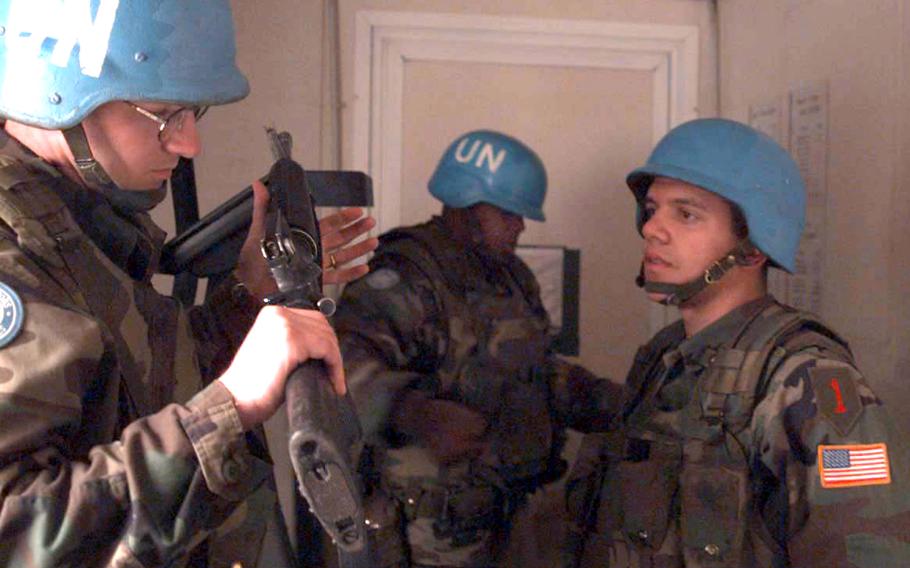 Buy Photo
Sgt. Michael Wolfe inspects the rifle of Pvt. 2 Jeffery Barnaby before going on a patrol in northern Macedonia in March, 1998. In the background is Spec. Jerry Jordan. The infantryman, based in Schweinfurt, Germany, are part of the United Nations peacekeeping force in Macedonia. (Vince Crawley/Stars and Stripes)

Buy Photo
Sgt. Michael Wolfe inspects the rifle of Pvt. 2 Jeffery Barnaby before going on a patrol in northern Macedonia in March, 1998. In the background is Spec. Jerry Jordan. The infantryman, based in Schweinfurt, Germany, are part of the United Nations peacekeeping force in Macedonia. (Vince Crawley/Stars and Stripes) Buy Photo
Spec. James Burke, 20, scans the hills of Serbia while patrolling the border of Macedonia in March, 1998. Burke, based in Schweinfurt, Germany, is among 350 Americans on a U.N. mission to monitor borders in the Balkan country. Although violence has erupted in the nearby Kosovo region, the Americans patrol a relatively quiet sector. (Vince Crawley/Stars and Stripes) Buy Photo
A Finnish officer shouts instructions as Americans test fire Finnish rifles during a live fire exercise Saturday near Skopje airport in Macedonia in March, 1998. Americans, most of them from Schweinfurt, Germany, make up 350 of the 750 United Nations peacekeepers patrolling Macedonia. Their patrols border the volatile Kosovo region of Serbia, but the U.S. troops say their mission is to monitor the border, not get involved in potential combat. Their current orders call for them to fire only in self defense. Their blue helmets symbolize the peaceful intent of their military duties. (Vince Crawley/Stars and Stripes) 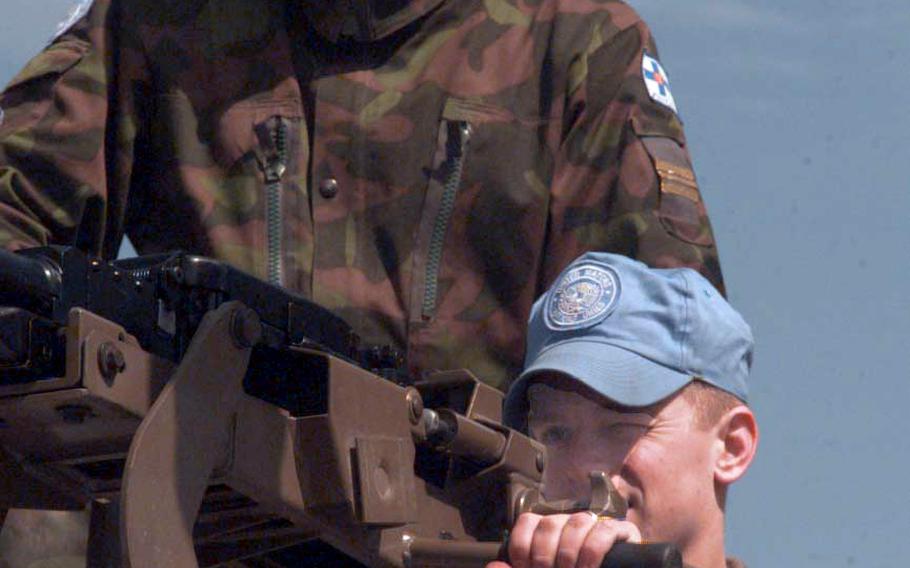 SKOPJE, Macedonia — Almost as soon as Pvt. 2 Jeffery Barnaby arrived for peacekeeping duty in Macedonia a month ago, his parents sent him an emergency Red Cross message.

A worried Barnaby, 20, didn't know the contents of the message, only that he needed to call his parents in Mansfield, La.

"I had a nightmare thinking my brother had got into an accident," the infantryman said. He sweated out the news until his leaders could get him to a telephone at a camp away from his border patrol station. And, because of the time difference, he had to wait until late evening before anyone was home.

Then he learned what all the fuss was about — his parents wanted to know if he was involved in last month's flare-up of violence in nearby Kosovo.

"I kind of got mad at mom, sending me a Red Cross message instead of just writing me," he said.

Still, he assured his concerned mother that he wasn't involved in the fighting, which killed about 80 people in the Kosovo region of Serbia.

"i told them not to worry much about me," Barnaby said. "The only way we're going to shoot is if somebody's shooting at us."

That scenario is unlikely as Americans approach their fifth year of patrolling Macedonia's border with Serbia, By Balkan standards, the roughly 60 miles of mountainous border are surprisingly peaceable even though it sits next to some of the region's most volatile powder kegs.

Barnaby's outfit is the 1st Battalion, 26th Infantry Regiment, based in Schweinfurt, Germany. The soldiers were supposed to have a quiet six months, kind of a caretaker shift in a U.N. mission that diplomats said would almost certainly end for good this August. Numbering 500 last year, the U.S. troops have been cut to 350 and were making plans for a final exit.

By all accounts, their mission has been completely overshadowed by the violence and reconstruction in nearby Bosnia, where two years ago 20,000 American troops led one of the largest, most heavily armed peacekeeping forces ever fielded.

Then, in late February and early March of this year, just as the Schweinfurt infantrymen were taking their border posts, Serbian police launched a massive armed campaign in Kosovo against ethnic Albanian separatists they claimed were responsible for terrorist attacks against police. About 25 Albanian women and children got caught in the killing, and violence in Yugoslavia was once again in the world's news.

"A lot of people have been real concerned about what's going on in Kosovo," Spec. Jim Brown, 27, said of his relatives back home in Monroe, Ga.

"Anything that shows up in the newspaper, anything that says Kosovo and Macedonia in the same paragraph, they normally assume we're in the midst of it."

With Balkan instability back in the spotlight, U.S. Assistant Secretary of State Strobe Talbott, visiting Macedonia last month, called for some kind of international force to remain after the end of the U.N. mandate in August.

Defense Secretary William Cohen last week upped the ante, saying he expects the United States will keep its 350 peacekeepers in Macedonia beyond next summer.

The United Nations considers Macedonia a success story — the only time a peace force has made a pre-emptive strike, deploying before a conflict started instead of after one exploded.

"It's a bit of a laboratory in that sense because preventive peacekeeping has never been done before," said Marc McEvoy, spokesman for U.N. forces in Macedonia.

The Americans make up not quite half of the 750 U.N. troops, and McEvoy said their presence — with colorful American flags sewn on their shoulders — far outweighs their relatively small numbers. "I don't think you can overstate the effect of having U.S. troops sitting on the Serbian border as a psychological deterrent."

With about 20,000 drafted soldiers and no money to buy arms, the landlocked country of 2 million considers the United Nations, and particularly the United States, vital to its survival.

Macedonia has major political disputes with each of its four neighbors, one of which — Serbia — began the Bosnian war in 1992.

Albanians, who are the ethnic Muslims living south of Bosnia, make up between 22 and 30 percent of the people in Macedonia, depending on who's doing the counting. They also make up 90 percent of Kosovo.

Kosovo is the site of an ancient battlefield, and many Serbs regard it as nearly sacred ground, like the American Gettysburg or France's Omaha Beach. If widespread fighting does break out there, Albanians in Macedonia have issued strong hints that they would rush to the assistance of their ethnic cousins.

"It's a concern," McEvoy said at the U.N. headquarters in Macedonia's capital of Skopje.

The ebb and: flow of such a battle could easily bring Serbian forces up to and across the frontiers of Macedonia. U.N. troops watch over the main crossing points, but they haven't the weapons — or mission — to do anything but act as bystanders.

"We can't set up defensive lines," McEvoy said. "We can't protect the country. We can't shoot anybody except in self-defense."

Then there's Bulgaria, to the east. That country's president recently promised that, if Kosovo imploded, he would dispatch troops to Macedonia's defense, using the reasoning that Macedonia is practically a province of Bulgaria. Macedonians aren't sure they want to welcome this offer of kinship, fearing they might not exist as an independent country after the melee is finished.

Meanwhile, in Albania 600,000 weapons were stolen from government armories during a collapse of law and order last year. Macedonia and Albania have signed a mutual defense agreement, but no one is quite certain what would happen if all those citizens bearing illegal arms felt they needed to rush to the assistance of neighbors.

To the south lies another quarrelsome neighbor — Greece. In the past Greece has refused to recognize the country because its uses the name "Macedonia." The Greeks have maintained that the name is intrinsically Greek and should not be used by a foreign country. This dispute is the reason that Macedonia; carries the convoluted name of "Former Yugoslav Republic of Macedonia."

These complex borders are the reason that Balkan watchers warn of a regional war if someplace like Kosovo goes ballistic.

Even if widespread fighting doesn't materialize, the Macedonians warn of 200,000 to 400,000 Albanians fleeing from Kosovo, creating an epic human crisis that none of its neighboring countries can handle.

During the recent clashes in Kosovo, though, U.N. troops reported all quiet on the Macedonian front.

"There's been no change" McEvoy said, "no visible evidence of refugees going across the border."

So the few hundred Americans continue to patrol their quiet borders while fielding curious phone calls and letters from home.

Not all families back in the States are worried, said Spec. Jerry Jordan, 28, of Oxnard, Calif.

"It's off the radar scope back there," Jordan said. "They don't even realize that we're here."

But Barnaby, the infantry private from Louisiana, said that so far he's glad to be a part of the Balkan peace force.

"It's changed my view of life a lot," he said, sitting inside sleeping quarters at one of the remote border posts. "I've learned to appreciate what I have."