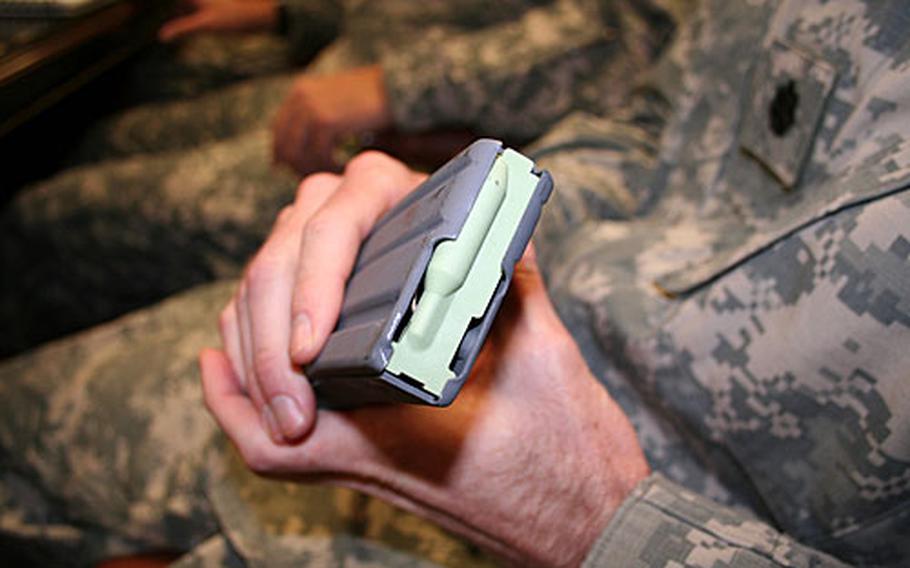 Magazines for the M-4 carbine and M-16 rifle are notorious for jamming. The culprit is the internal mechanism, including the spring and the green plastic plastic “follower” that feeds cartridges into the weapon. (Lisa Burgess / S&S)

Of a total of 60,000 rounds expended in the sandstorm-like test, the M-4 carbine racked up 882 misfires, or about one misfire for every 68 rounds fired, according to Brig. Gen. Mark Brown, commander of the Army&#8217;s Program Executive Soldier.

The German-made Heckler & Koch XM8, which the Army had been developing as a replacement for the M-16 until 2005, racked up 127 stoppages, the best of the group.

The test, which was held at the Army Test and Evaluation Center at Aberdeen Proving Ground, Md., stressed the weapons under laboratory-created conditions that would not be replicated in even the worst desert combat environment, Brown told Pentagon reporters during a Monday briefing about the test.

The tests were held at the request of Sen. Tom Coburn, R-Okla., who in July asked the Army to check the M-4&#8217;s effectiveness in dust environments against the other three weapons.

This is the third time the M-4 has undergone the extreme dust test, and &#8220;eyebrows were raised&#8221; by the &#8220;puzzling&#8221; drop in performance of the weapon during this most recent challenge, Brown said.

Army experts are still analyzing the data to try and determine the reason for the differences in the most recent test, which was held from late September to late November, Brown said.

That news will come as little surprise to soldiers who have wrestled with &#8220;bolt over cartridge base&#8221; misfeeds &#8212; when the back of one round jumps over its partner, instead of staying parallel &#8212; or nose-diving malfunctions, when the front of the round dips instead of staying flat.

Either problem can jam a weapon, and jams can be deadly in combat.

&#8220;We know that we have a problem,&#8221; said Col. Robert Radcliffe, director of the Infantry Center&#8217;s Directorate of Combat Developments at Fort Benning, Ga.

That includes the spring and the small elevatorlike shelf where the rounds rest, called the follower.

The Army has developed improved &#8220;guts&#8221; for the 5.62 magazine which will ensure smooth operation, Radcliffe said. The program is almost finished, and subject to the results of more testing the improved magazines will start making their way to troops as early as next fall, starting with deployed soldiers.

Troops will know they have the improved magazines because the plastic follower &#8212; which is now a very pale green &#8212; will be a different color, still to be determined, Radcliffe said.