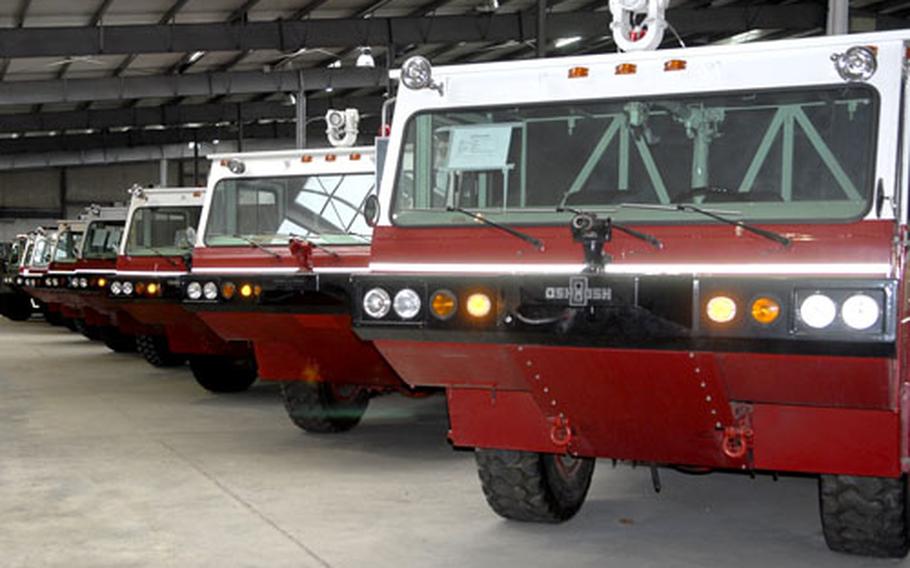 Fire trucks are just one of many types of vehicles in reserve at the U .S. Air Forces in Europe Central Region Storage Facility at Sanem, Luxembourg. The Air Force has stored war reserve equipment stockpiles at Sanem since 1994. (Jennifer H. Svan / S&S)

Fire trucks are just one of many types of vehicles in reserve at the U .S. Air Forces in Europe Central Region Storage Facility at Sanem, Luxembourg. The Air Force has stored war reserve equipment stockpiles at Sanem since 1994. (Jennifer H. Svan / S&S) 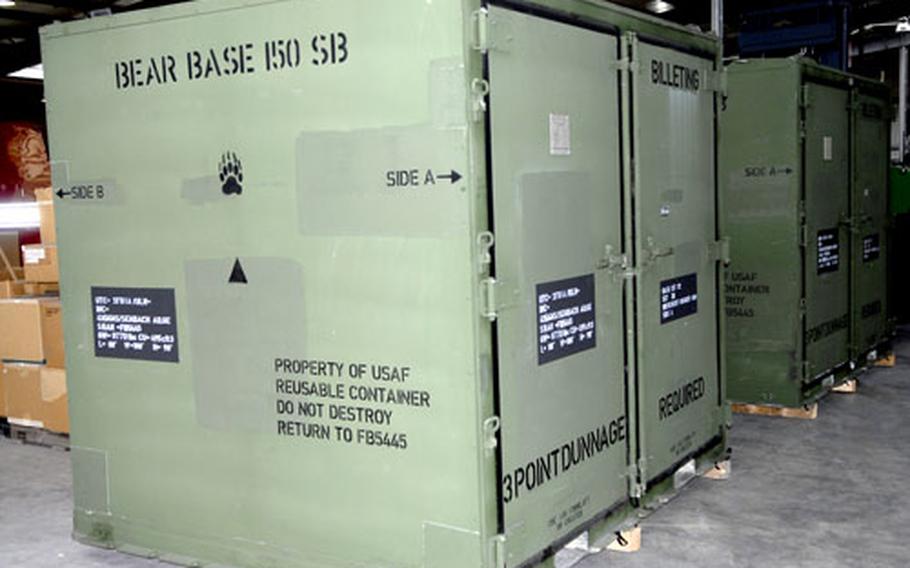 A billeting container, part of the Basic Expeditionary Airfield Resources package, makes up part of a “tent city” the Air Force could erect to house airmen at an austere location anywhere in the world. (Jennifer H. Svan / S&S) 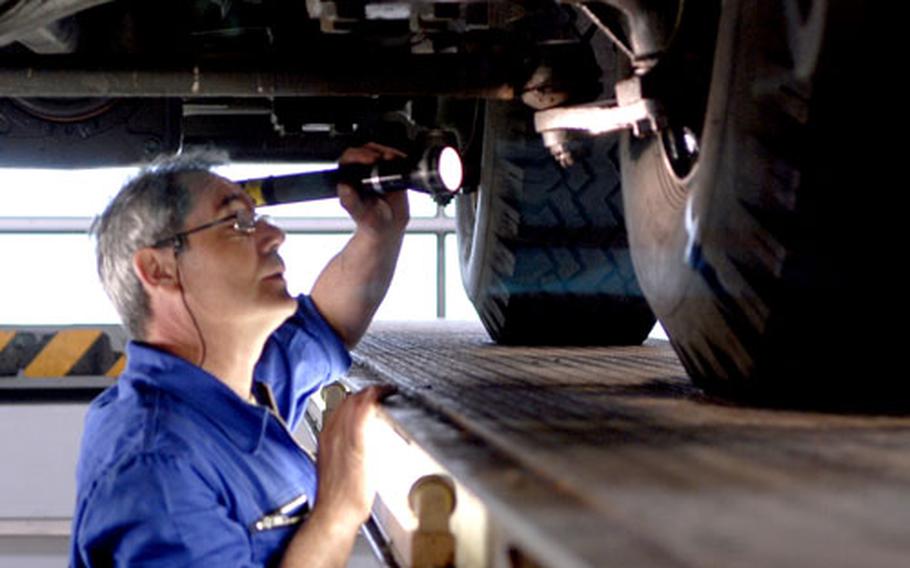 Carlos Ferreira, a Warehouse Services Agency employee at the U.S. Air Forces in Europe Central Region Storage Facility at Sanem, Luxembourg, inspects a heavy-duty forklift for hydraulic leaks. The depot is tasked with not only storing war reserves, but also securing, repairing, and maintaining the equipment, ensuring it’s ready to be shipped on a dime. (Jennifer H. Svan / S&S) 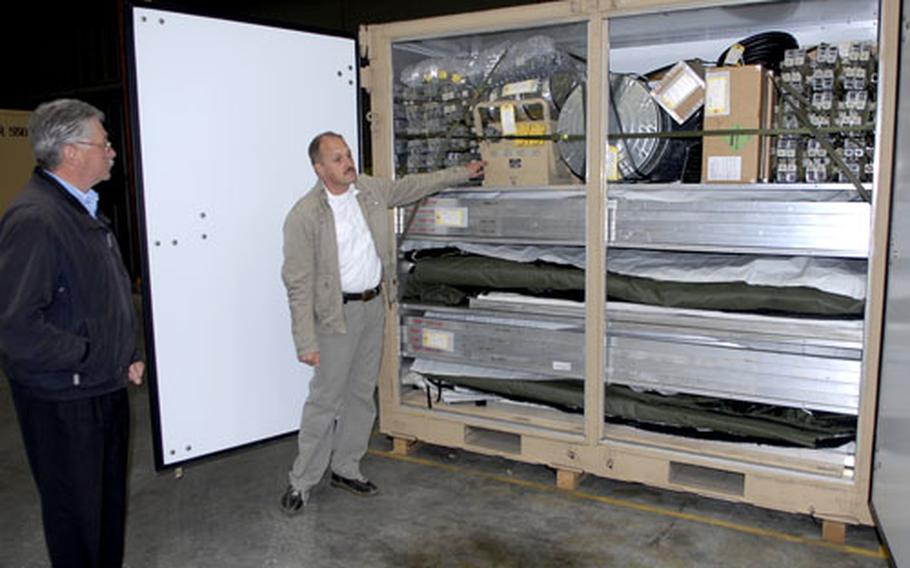 SANEM, Luxembourg &#8212; If you&#8217;re an airman assigned to the 435th Materiel Maintenance Squadron at Sembach Air Base, Germany, chances are you&#8217;re savvy on a few Luxembourgish words.

At the very least you know Luxembourg is a tiny country nestled between France, Belgium and Germany.

Many of the 40-some members of the squadron log countless trips across the border to Luxembourg; it&#8217;s common for airmen to rack up 100 to 200 days of temporary duty during a multiple-year assignment with the squadron.

In the process, they&#8217;ve grown familiar with local traditions, such as "if they offer you wine, you pretty much have to drink it," said Tech. Sgt. Edward Watson, 435th Materiel Maintenance Squadron supply flight chief.

Though sharing spirits socially may produce a few drops of goodwill, the link between the U.S. Air Force and a European country smaller than Rhode Island is strategic.

Sanem is a key logistics hub for the Air Force, home to more than 85 percent of U.S. Air Forces in Europe&#8217;s War Reserve Materiel. That includes fire and fuel trucks, aircraft tanks and aerospace ground equipment, and containers upon containers of supplies needed to build an expeditionary, bare-bones base in a hurry. It all sits in a series of tightly-guarded, non-descript warehouses about 10 minutes from France.

The United States and Luxembourg struck up a relationship in 1978, in the Cold War days and just prior to the large weapons-buildup in Europe ushered in by the Reagan era.

Luxembourg was asked whether it would allow for the construction of two U.S. military storage sites, Holtzem said.

One of the sites, at Bettembourg, was closed by the U.S. Army in 2006 as part of former Secretary of Defense Donald Rumsfeld&#8217;s Europe force-structure realignment plans.

The value of current stockpiles at Sanem is an estimated $350 million, according to Air Force officials.

A Luxembourg government agency named Warehouse Services Agency runs the site, under the oversight of the 435th Materiel Maintenance Squadron at Sembach.

Through a political arrangement between the two nations, USAFE reimburses the host nation for the services of WSA and its approximately 100 civilian employees, according to Holtzem.

WSA doesn&#8217;t turn a profit, but the partnership reaps jobs for Luxembourg nationals and other benefits.

"This is a direct contribution from Luxembourg to the common defense of NATO, the alliance," Holtzem said.

The depot is tasked with not only storing war reserves, but securing, repairing, and maintaining the equipment, ensuring it&#8217;s ready to be shipped on a dime to wherever the Air Force may need it.

During the Cold War, "it was authorized for a big major theater war contingency," said Maj. Adrian Crowley, the 435th Materiel Maintenance Squadron commander. Now the supplies most often are used to support U.S. military training exercises in Eastern Europe, humanitarian operations, and visits by the U.S. president to Europe and Africa for conferences and summit meetings.

"Wherever Air Force One goes, we would have our refueler trucks out there, firetrucks, occasionally some heavy forklifts, to support the presidential fleet of aircraft," Holtzem said.

The squadron at Sembach oversees the mission, but it&#8217;s one that&#8217;s been scaled back drastically, according to Crowley.

"This time last year, you would have seen a yard full of aerospace ground equipment and vehicles and active maintenance shops here on Sembach," Crowley said recently.

Eventually the squadron will move to Ramstein, since Sembach is "consolidating for the most part into Ramstein and other bases," he said.

The squadron&#8217;s roster, in the past one and a half years, has been cut in half, with more responsibility being pushed out to the Luxembourg staff, and some of the stockpiles at Sanem being redistributed to units worldwide as part of Air Force transformation, Crowley said.