Lt. Gen. Sanchez says troops are focused and back mission 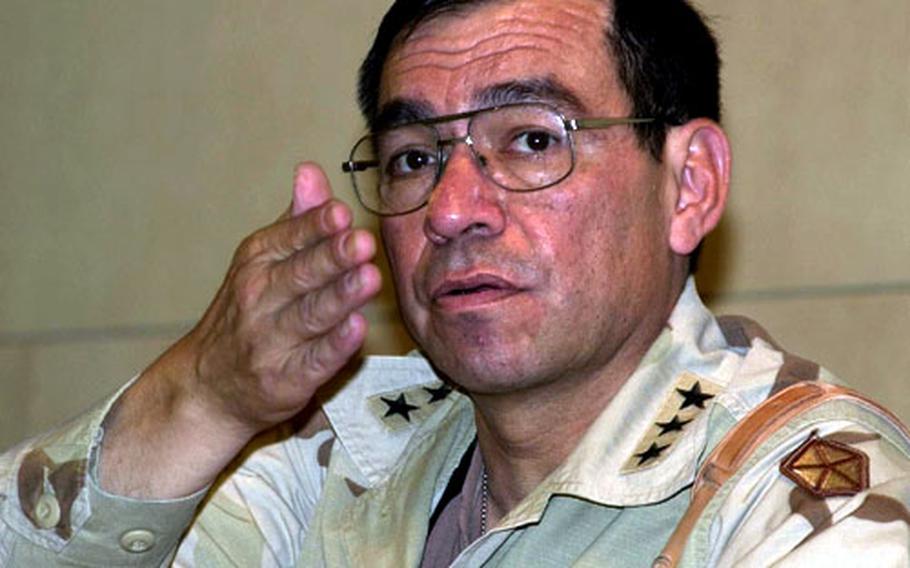 (Click here for the full transcript of Stripes&#39; interview with Lt. Gen. Sanchez.)

BAGHDAD, Iraq &#8212; The Pentagon&#8217;s top commander in Iraq said complaints about morale are &#8220;expected,&#8221; but troops are focused and they understand and support the mission.

&#8220;Are you going to find soldiers on any given day who are down on morale? Of course,&#8221; said Lt. Gen Ricardo Sanchez, commander of all U.S. forces in Iraq. &#8220;There are days when I wake up and don&#8217;t feel very good and I&#8217;d probably bite your head off. I walk around and talk to all sorts of soldiers also, and I honestly believe our soldiers are doing very, very well. There is no morale problem.&#8221;

Complaints about morale, living conditions and other issues surfaced in a Stars and Stripes survey of nearly 2,000 troops in Iraq.

More importantly, he added, &#8220;I guarantee you that if you ask a soldier if he&#8217;s focused on his mission, does he understand the criticality of his mission, I think you find that a majority of them really do understand why we&#8217;re here and the implications of us not succeeding.&#8221;

&#8220;I think the missions we have are very clear,&#8221; Sanchez said. &#8220;One, conduct offensive operations against noncompliant forces. The second one is stability and support operations in our zone.&#8221;

Where there is confusion, he said, it likely comes from the blending of those two missions across a country that is as diverse as it is big.

&#8220;That&#8217;s a fairly significant challenge, being able to piece that together to the overall mission of the country,&#8221; he said. &#8220;Even at the brigade [level], that can be problematic because such dynamic conditions exist. In some cases you&#8217;re going from stability and support operations in one small area and then transition into a low-intensity conflict area very, very rapidly.&#8221;

He points to Baghdad, where more than 40 of the nearly 100 U.S. combat fatalities have occurred since President Bush declared major combat operations over on May 1.

&#8220;This is probably one of the most complex environments. It&#8217;s much more complex that Kosovo was. Just in sheer size and then all the different dynamics that are playing here. So that can be fairly confusing for a young soldier on the ground.&#8221;