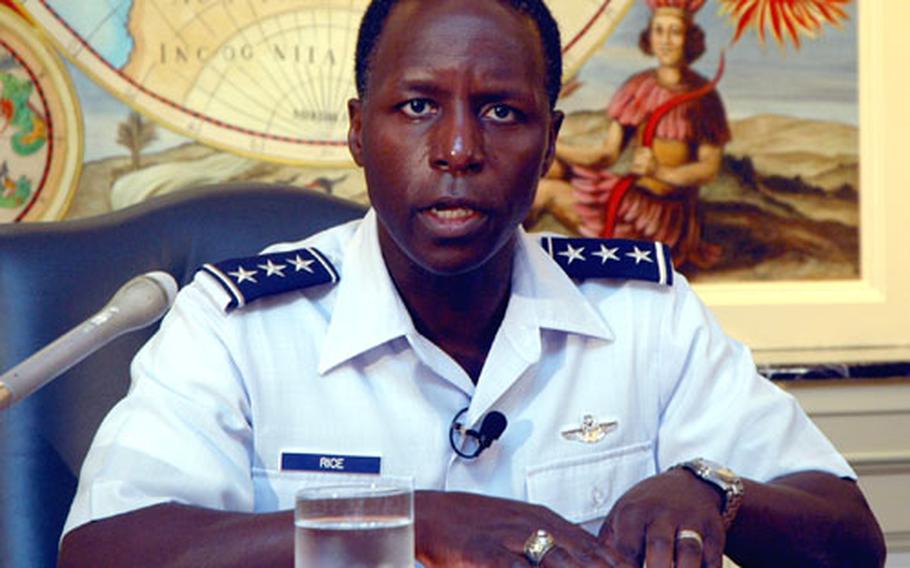 TOKYO &#8212; The top U.S. military officer in Japan on Tuesday repeated his support for a decision earlier this year that confined servicemembers and other status of forces agreement personnel in Okinawa to military bases and off-base homes in the wake of an accusation that a Marine raped a 14-year-old girl.

But that decision in February does not mean that the military will always take the same tack in the future, U.S. Forces Japan commander Air Force Lt. Gen. Edward Rice Jr. said Tuesday.

"I think it&#8217;s important that we demonstrate when we have a significant incident like that one to the people of Japan that we take these incidences very seriously," Rice said in response to a question about the military&#8217;s move to restrict servicemembers, workers and their families in Okinawa and at Camp Fuji and Marine Corps Air Station Iwakuni in mainland Japan to their homes for nearly two weeks.

"We won&#8217;t do that every time we have an incident," he said. "I&#8217;m interested in what will work and what will be effective. And I think that we achieved the effect during that period of time. But to do it again would not achieve additional effects. Each one of these has to be handled as a particular situation."

Since taking command of USFJ and the 5th Air Force in February, Rice has spoken several times about increased efforts to stem serious crimes among the U.S. military community in Japan.

At a media briefing at the New Sanno hotel in Tokyo, Rice reiterated these efforts. He added that he attends briefings for newcomers, when he can, within USFJ&#8217;s headquarters unit to speak personally about being good residents while living in the country. He stressed the continued need for commanders at the local level to discuss the issue.

Rice took command shortly after an accusation that a Marine in Okinawa raped a 14-year-old girl. Japanese police ultimately dropped the charges; the Marine is now serving a 36-month sentence after admitting in a military court he molested her.

During the fervor of the arrest and initial investigation, the incident gained worldwide attention.

On Tuesday, Rice also talked about the arrival of the USS George Washington, a nuclear-powered aircraft carrier that will replace the retiring USS Kitty Hawk. A fire aboard the ship in May has postponed the planned August arrival, though Rice said Tuesday he thought the delay would not be significant.

The carrier&#8217;s assignment at Yokosuka Naval Base has prompted complaints from some Japanese, including a group of 13,000 who protested in Yokosuka last weekend.

"There continue to be voices across the spectrum with respect to the arrival of the George Washington, I think the majority of the people understand its important role and are looking forward to its arrival," Rice said.