Lt. Gen. Keen: Our man on the ground in Haiti 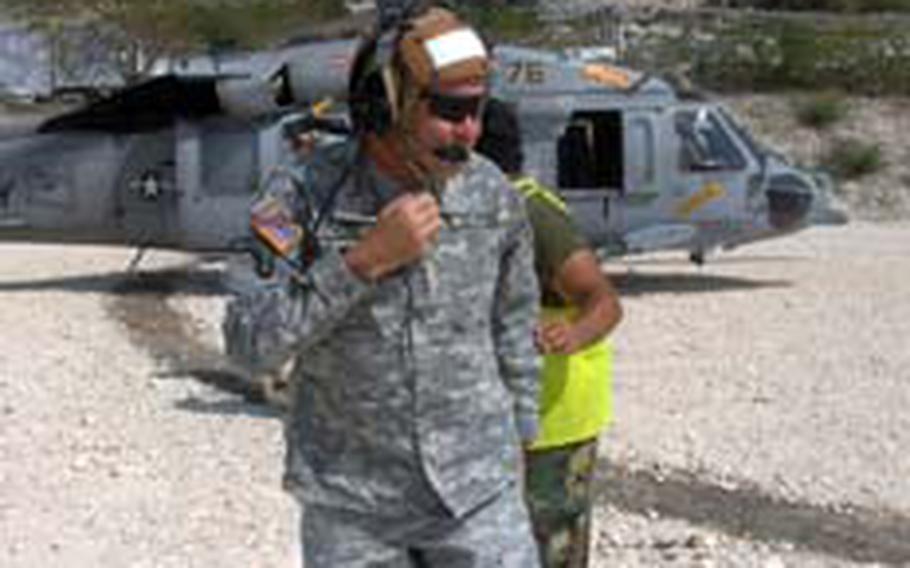 Lt. Gen. Ken Keen looked down from a helicopter circling over earthquake-ravaged Port-au-Prince last Wednesday and saw a patchwork of multicolored tents that had sprouted among the Haitian capital&#39;s rusting corrugated iron roofs and collapsed buildings to house hundreds of thousands left homeless by the disaster. (Seth Robson / S&S)

PORT-AU-PRINCE, Haiti &#8212; Lt. Gen. Ken Keen looked down from a helicopter circling over Port-au-Prince on a recent Wednesday and saw the big picture: a patchwork of multicolored tents that had sprouted amid the Haitian capital&#8217;s rusting corrugated iron roofs and collapsed buildings to house hundreds of thousands left homeless by January&#8217;s earthquake and aftershocks.

In a city where earthquake rubble still spills onto roads that are clogged with traffic and street vendors, a helicopter is often the quickest way for the Joint Task Force&#8211;Haiti commander to get from point A to point B.

The former paratrooper and special operations soldier, who spent much of his career training troops in Central America to fight communists, has been working without pause since the devastating Jan. 12 earthquake, supervising the massive U.S. military relief effort.

Keen was in Haiti on the day of the earthquake in his role as military deputy commander of U.S. Southern Command, talking to Haitian officials about disaster response. He has vivid memories of the giant temblor, which struck while he was chatting with U.S. Ambassador Kenneth H. Merten at his Port-au-Prince residence.

The shaking, which started just before 5 p.m., got worse as the pair staggered into the yard, he said.

Somehow the 1930s-era hilltop residence, near the Petionville Golf Club, remained standing. But as the soldier stared out over the city, he could see dust begin to rise.

Soon, injured Americans started staggering into the ambassador&#8217;s residence and Haitian government officials arrived on motorcycles looking for U.S. military assistance. The first thing that Haitian President Rene Preval asked for was help running the capital&#8217;s airport &#8212; a vital link to aid from the outside world, Keen said.

Special Forces airmen hit the ground within hours of the earthquake and had control of the airspace over Port-au-Prince 29 minutes later, he said, adding that the U.S. Air Force controlled up to 180 fixed and rotary wing flights daily during the height of the relief effort before the airspace was handed back to Haitians in early March.

&#8220;We knew we had Americans injured,&#8221; Keen said. &#8220;Probably some severely injured, so we had SOUTHCOM put Coast Guard cutters with aircraft on them to get into range to medevac folks to Guantanamo Bay or the Dominican Republic.&#8221;

By first light on Jan. 13, Keen recalled, Coast Guard aircraft were landing in Haiti to evacuate seriously injured U.S. personnel; ships like the USS Carl Vinson and USS Bataan had been ordered to assemble; and the global response force, which included a brigade from the 82nd Airborne Division, was alerted.

&#8220;Travel across the city was slow because of rubble and crowds blocking roads,&#8221; he said. &#8220;Every third building, it seemed, had collapsed or was severely damaged. Streets looked like scenes out of World War II. It became evident to me that this was going to be a tremendous challenge for the international community and for any of us to address the immediate need for support.&#8221;

U.N. forces in Port-au-Prince were struggling to find their feet after the collapse of their headquarters with heavy loss of life, Keen said. However, he added, their presence helped stabilize the situation.

&#8220;From a point of security, the U.N. troops, with what they had, were in the streets,&#8221; he said. &#8220;Some of it was trying to look for their own troops or civilians, but I think their presence in the city had an effect. We did not have massive looting or massive violent activities going on in the first few days.&#8221;

Keen&#8217;s goal, at that stage, was to get as much assistance to Haiti as fast as possible, he said.

&#8220;Thousands of lives had already been lost and more needed medical assistance,&#8221; he said. &#8220;Some of the hospitals were treating people but they were overwhelmed immediately with trauma injuries. Our priorities were saving lives and search and rescue.&#8221;

Keen can cite statistics that show U.S. military intervention, which at its height involved the deployment of 22,000 personnel, saved many lives: Search and rescue teams pulled 120 people alive out of the rubble, JTF&#8211;Haiti medical staff conducted 90,000 patient encounters and doctors performed more than 800 surgeries on the USNS Comfort hospital ship, he said.

&#8220;It was like a little war zone,&#8221; he said. &#8220;There were people lying out in the street with compound factures and crush injuries. They had run out of anesthetic and they were operating without power and working around the clock.&#8221;

The JTF&#8211;Haiti commander sent a platoon from the 82nd to the hospital to control the crowds, which, Keen said, have cooperated with soldiers throughout the mission.

When the 22nd Marine Expeditionary Unit arrived in Haiti, the Marines were sent to the town of Leogane, which had been nearly destroyed, he said.

The day after the disaster, Keen sent an engineer to find out what it would take to reopen Port-au-Prince&#8217;s badly damaged seaport so that larger quantities of aid could flow in. Two weeks later, with the help of U.S. Army landing craft and engineers, the seaport was receiving cargo. Aid also came overland from San Isidro Air Base in the Dominican Republic, Keen said.

The Brazilian commander of U.N. military forces in Haiti, Maj. Gen. Floriano Peixoto Vieira Neto, who was out of the country when the earthquake struck, said he&#8217;s been friends with Keen since the pair parachuted together in Brazil in 1984.

&#8220;At that time, as captains, we couldn&#8217;t have imagined that in the future we would be together executing one of the most important tasks of our lives,&#8221; the Brazilian said of Keen, with whom he also worked during a visit to Fort Benning, Ga., in 1988.

&#8220;The fact that Lt. Gen. Keen and I have known each other for more than 20 years has affected the results here,&#8221; he said, adding that the U.S. military forces are a welcome addition to the U.N. efforts in Haiti.

In the past two months Keen has left Haiti once &#8212; to attend the funeral of one of his officers who was killed in a hotel collapse during the earthquake.