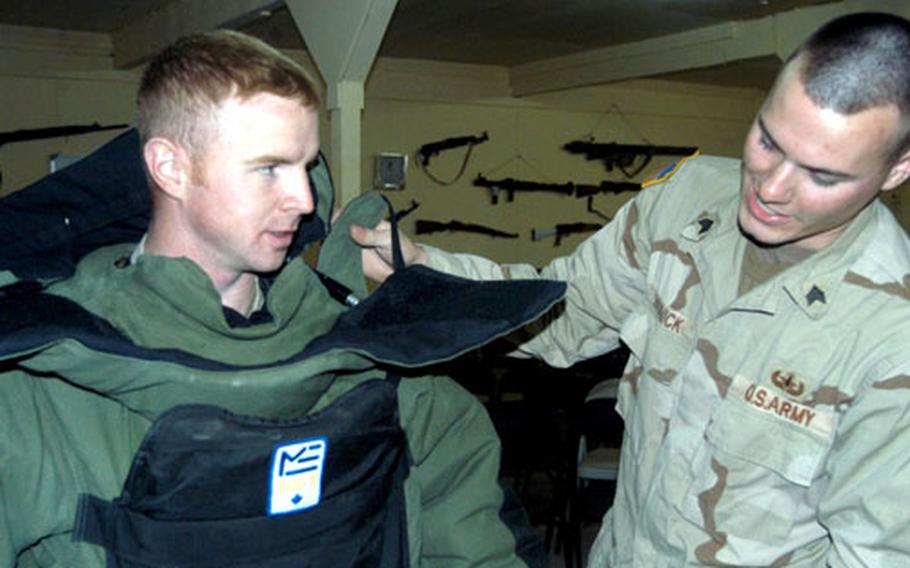 Sgt. Corey Wybourn of the 29th Signal Battalion tries on a bomb suit with the help of Sgt. Daniel Brunick of the 716th Ordnance Company (EOD). The EOD unit held an open house Saturday at LSA Anaconda, Iraq, for anyone interested in becoming an EOD specialist. About 30 soldiers, including Wybourn, attended. (Ron Jensen / S&S)

LOGISTICS SUPPORT AREA ANACONDA, Iraq &#8212; There may be no better place to recruit soldiers into a job that involves blowing up things than Iraq, where things tend to blow up with great regularity.

The 716th Ordnance Company (Explosive Ordnance Disposal) from Fort Richardson, Alaska, held an open house recently for about 30 soldiers to explain their specialty.

But during the next 90 minutes, the soldiers learned that EOD troops are anything but lunatics. They are professional soldiers who know a lot about everything from &#8220;firecrackers to nukes,&#8221; in Hockstedler&#8217;s words.

They put their lives on the line frequently and succeed in a career where many wash out of the training.

Sgt. Daniel Brunick, an EOD troop since July, said he started his class with 25 people at Eglin Air Force Base, Fla., where all services train EOD troops.

Hockstedler, who has spent 18 of his 23 active-duty years in EOD, recited the long list of requirements for membership in the fraternity, including lack of an allergy to explosives and normal color vision, in case one is asked to cut the red wire, not the blue one.

Claustrophobic troops need not apply, either. The bomb suit that is sometimes worn can be a bit confining.

Hockstedler said the Army needs more EOD troops because the service is standing up a new group and two battalions next year. Such recruiting efforts are done frequently in the States, he said after the open house, but, to his knowledge, had not been done in Iraq.

Soldiers, he said, have a better success rate in the yearlong training than people recruited from civilian ranks.

Hockstedler held nothing back in his presentation.

In a three-year assignment, an EOD soldier will likely see duty in the Balkans, Afghanistan and Iraq. Plus, the Army EOD folks help civilian law enforcement in the States, including the Secret Service and FBI.

In Iraq, his unit has answered more than 300 calls since arriving in mid-October, an average of seven or eight a day, everything from roadside bombs to unexploded ordnance fired onto the base. The unit has 19 people at the base, including support personnel.

The busy schedule didn&#8217;t seem to bother Sgt. Corey Wybourn, a vehicle mechanic with the 29th Signal Battalion, who attended the open house.

Brunick, who joined the EOD team after six years in the medical logistics field, said he does not regret changing fields.

There is danger, Brunick said, as he pointed at a table filled with explosive devices found around LSA Anaconda. And one person is not always going to know everything about every kind of bomb.

Plus, he said, the insurgents are coming up with many tricks, using cordless phones and car alarms, for example, to set off the bombs. But the challenge, he said, is in keeping up with the bad guys.

Hockstedler said he was pleased with the turnout for a first-time event at the base. Asked how many he hoped would become EOD members, he said, &#8220;I would be happy with one good-quality soldier.&#8221;