Loved ones rejoice on release of Iraqi detainees who U.S. troops help reintegrate into society 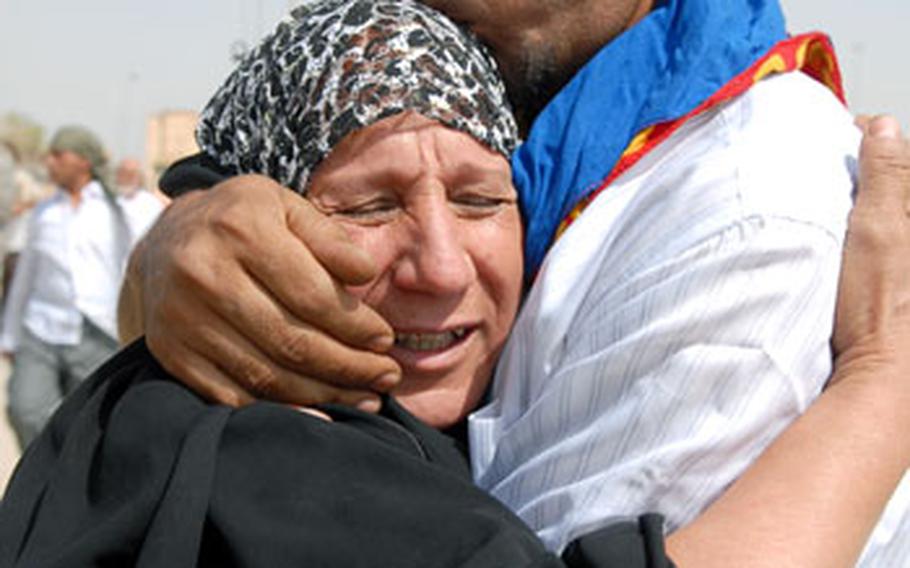 Mohammad Afon Ali hugs his mother Thursday in Baghdad’s Ghazaliyah neighborhood en route to sign the papers that will make him a free man. Ali was one of about 75 detainees allowed to return to the community under a supervised release program. (James Warden / S&S)

Mohammad Afon Ali hugs his mother Thursday in Baghdad’s Ghazaliyah neighborhood en route to sign the papers that will make him a free man. Ali was one of about 75 detainees allowed to return to the community under a supervised release program. (James Warden / S&S) 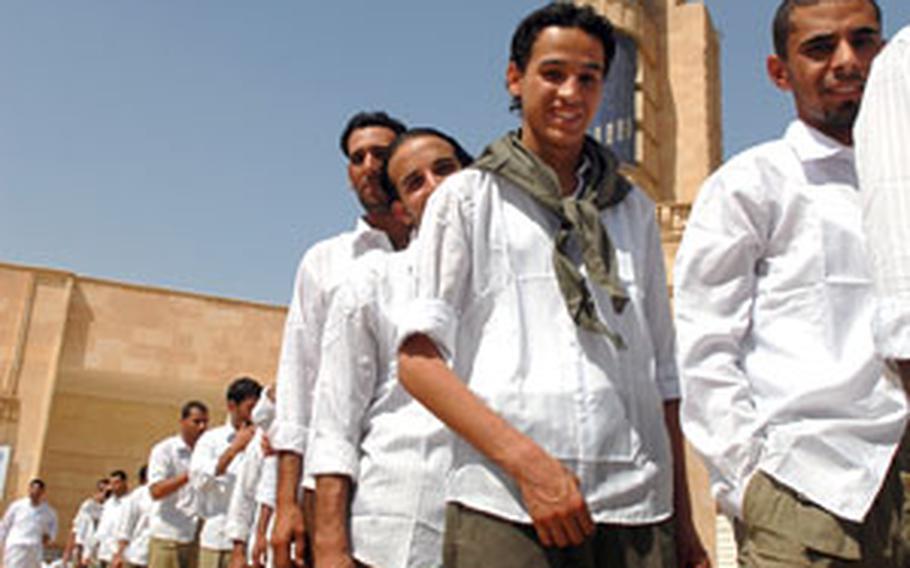 Recently-released detainees wait outside a Baghdad mosque Thursday as they get ready to head into the community as free men. (James Warden / S&S) 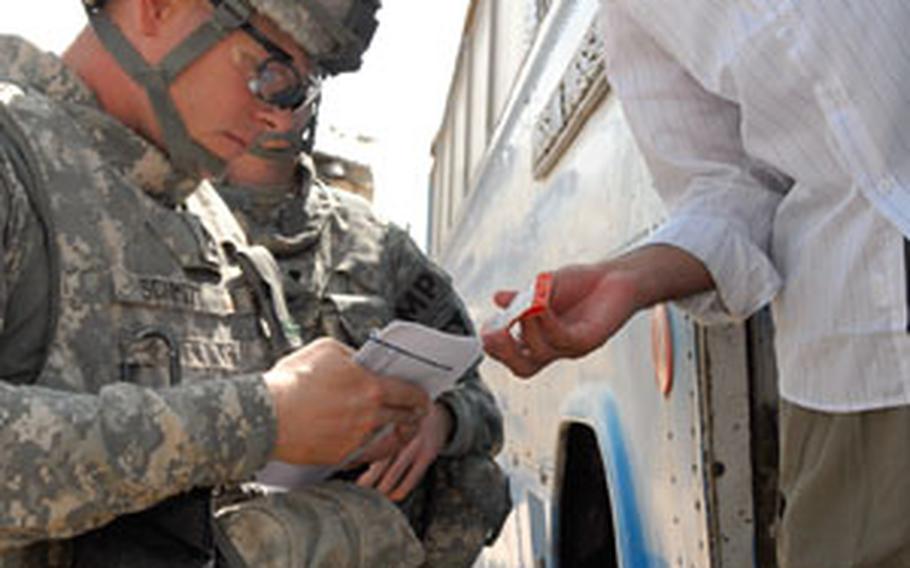 An American soldier checks the identification of a former detainee as he steps off the bus that carried him to freedom Thursday in Baghdad. (James Warden / S&S) 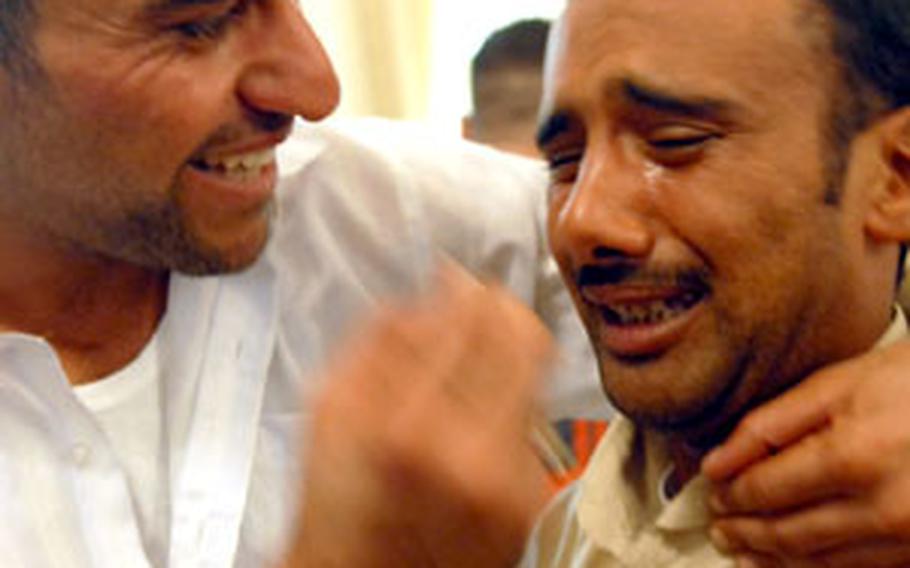 A former detainee, left, celebrates his release Thursday in Baghdad with a man who promised to guarantee his good behavior. (James Warden / S&S)

Achmet Hammad signs an agreement Thursday promising to ensure the good behavior of a former detainee, in the background. Coalition forces partner former detainees with “guarantors” to help them resist the temptation to rejoin insurgent cells. (James Warden / S&S)

The men quietly exited their bus and headed into a mosque to sign the papers that would make them free men. A crowd of mostly women and children waited in a grassy area off the road. Many tossed candy to the line of men marching along.

But the women were too excited to wait for long.

A few loosed an ululating cry of joy, tears flowing down their cheeks. Others quickly took up the high-pitched call. It eventually became too much for one mother. She rushed past Iraqi army guards and buried her face in her son&#8217;s chest. With that, the floodgates opened. Women and children poured into the street to embrace sons and husbands and brothers they hadn&#8217;t seen free in months or even years.

Coalition forces released about 75 detainees on Thursday following a ceremony in Baghdad&#8217;s Ghazaliya neighborhood. The occasion was just the latest detainee release as American and Iraqi forces work to reconcile former fighters with their country.

Reintegrating alleged insurgents back into the community is an essential part of counterinsurgency strategy, said Lt. Col. John Hermeling, the commander of 1st Squadron, 75th Cavalry Regiment. Insurgents have no reason to quit fighting if there is no way for them to rejoin society. In short, the government is "forgiving the sins of the past if you&#8217;ll join us for the future," he said.

Thursday&#8217;s ceremony was designed to press home the importance of this reconciliation, said Capt. Thomas Melton, commander of the regiment&#8217;s Troop A. It took place at a massive mosque that Saddam Hussein built to commemorate his "victory" in the first Gulf War.

An Iraqi general spoke to the detainees, and a few leading sheiks told the crowd about the need for different sects to get along. As the detainees left the ceremony, the Americans handed them a traditional basket of sweets and the sheiks handed them plastic bags with gifts.

"It will be an eye-opening experience for the detainees," Melton said.

Yet the ceremony&#8217;s conclusion was just the middle of a process that began long before and will continue long afterward.

The road to release starts a couple months earlier when a committee identifies the individuals as candidates for release. The committee sends the names for review to the unit that detained the men. The process is delayed if a unit doesn&#8217;t think someone should be released, but detainees are eventually released anyway unless the unit has new intelligence suggesting that they&#8217;re a threat.

The situation doesn&#8217;t always sit well with American soldiers. Some feel caught in a Catch-22 between getting a dangerous insurgent off the streets and delaying their arrest to gather sufficient evidence for the Iraqi courts to keep them in prison.

About a month before the ceremony, the units start trying to find each detainee a "guarantor" &#8212; someone who signs an oath promising to ensure the detainees don&#8217;t go astray. The guarantor is like a parole officer, although about 90 percent are related to the detainees.

"In this culture, they take it very seriously to be responsible for another person," Melton said.

Achmet Zaboon is a Ghazaliya man who promised to watch over his nephew Hassan Adnan, who was detained three months ago. Zaboon said it is a great idea to release the men under the guardianship of someone else. He plans to keep his eyes on Adnan for anything suspicious, although he doesn&#8217;t expect the process to be too difficult.

American soldiers will also check on the detainees after their release, Melton said. Insurgent cells often contact returning detainees. The checks will let them know they&#8217;re being watched and give soldiers an idea about how they&#8217;re doing. Melton can also direct the former detainees to jobs, the lack of which are one factor that fuels the insurgency.

"It will hopefully give them that will power to resist," he said.

"Every day I lost one year of my life," he said.

Many detainees Sayyid knew were scared to return home and worried that something would happen to them. He&#8217;s reassured about having a partner who can help him with his transition back to a normal life. However long he spent in prison, he&#8217;s out now and ready to get on with his life.