Love can build a bridge, even in Bosnia 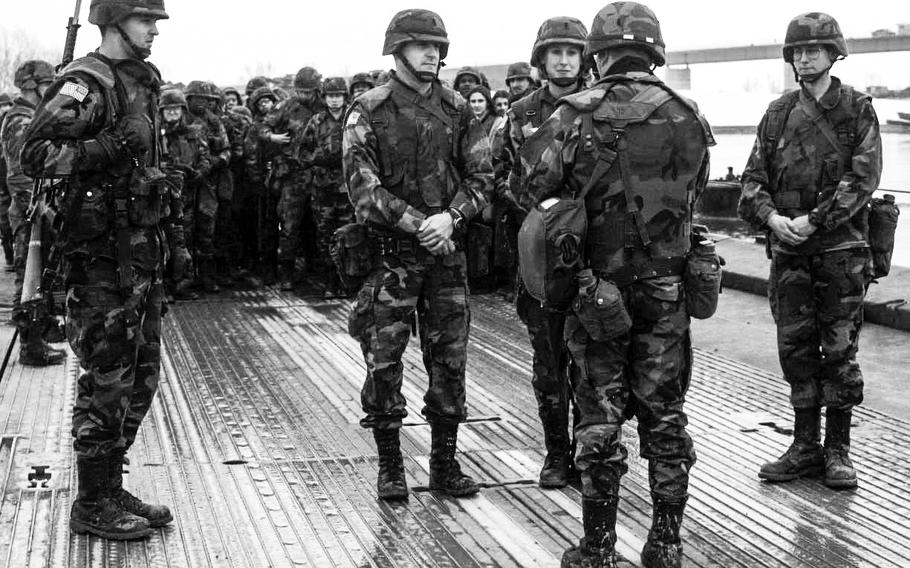 ON THE SAVA RIVER — On a bridge that spanned once troublesome waters, two U.S. soldiers packing sidearms declared their love for each other at high noon on St. Valentine's Day.

Kristin Marie Reisenweber and Kevin Zane Smith, both first lieutenants in the U.S. Army, were married Wednesday, as their invitations eloquently put it, "upon the Sava River."

"Kris and Kevin both wanted something short and simple," said Army Chaplain (Capt.) Mark Roeder, who officiated the wedding that drew about 100 people. "Plus, we don't want to tie up the bridge for too long."

Built about a month and a half ago by Army engineers from the 502nd Engr Co, the pontoon bridge enabled thousands of American soldiers to cross from Croatia into Bosnia as part of the NATO-led peacekeeping mission.

In the couple's honor, the original bridge — a second one has since been built — was closed to traffic for about an hour.

"There's not much for us to do but shut down the bridge to traffic, get the people out there and let them do what they have to do," said Capt. Robert Fancher, commander of the 502nd Engr Co, which deployed to Bosnia from Hanau, Germany.

Fancher had some soldiers clean off the bridge before the wedding started, and, because he is the bridge boss, he attended the affair.

"How many times do you see a wedding on a bridge?" Fancher asked. "Not too often."

The novelty was one of the reasons Kevin decided to do it, said 1st Lt. Ericka Baltz, a colleague of his. The groom, Daltz said, thought the event would be "the ultimate romantic experience — to get married in Bosnia, on the Sava River, on Valentine's Day."

The notion of getting hitched in Bosnia, as Kris and Kevin recounted on their wedding eve, started as a lark. The two began joking with their co-workers about such a stunt shortly after they got engaged Dec. 9.

"It was all such a big blur," Kris said of the engagement. "All our days were muddled."

Muddled because the deployment to Bosnia loomed large, and then Kevin went and did something crazy like propose nine days before he set foot in Croatia. The two had known each other for 14 months.

The big question arose over dinner at the Rathskeller, a German restaurant in the town of Bruchkobel near Hanau. Kevin told Kris he had an ornament for her — she assumed it was for a Christmas tree. Instead, he revealed a loop of red ribbon with a ring dangling from it.

He popped the question and she Rogered back.

"It was really charming," Kris said. "He caught me off guard."

Over the next few days, they decided on a full-blown wedding in December 1996 in Washington, D.C., where Kris' parents live. They also talked about north to Copenhagen, Denmark, for a quick civil ceremony. There was a sense of urgency because the paperwork for establishing joint domicile status — which allows couples to be assigned to the same duty station — takes months to process.

With both of them due to be reassigned later this year, they decided not to cut it short. But the exact date of the legal ceremony was left up in the air as they prepared to deploy.

At some point, the idea of getting married in Bosnia surfaced, Kris said. And once the jokes ran their course, the couple decided that maybe it wasn't such a goofy idea after all.

"It had been slowly going from a joke to 'Well, are you really going to do this?'" Kevin said. "We realized that we could pull it off."

Soon, word of the Bosnian nuptials spread to colleagues, as well as to some local railroad workers who came to know Kevin in his job with the 18th Corps Sup Bn.

"They thought it was wonderful that an American would do that in their country, Kevin said.

Kris, too, received moral support from locals who live near Camp Harmon, a troop staging area where she is based with the 485th Corps Support Bn. It's a reality check, she said, "to get married in a place that's always not filled with the comforts of life."

According to policy, life in Bosnia requires soldiers to wear a flak vest and Kevlar helmet whenever they are outside. So on Wednesday, instead of a tuxedo and flowing white dress, the bride and groom exchanged vows in full battle gear.

They did, however, remove their helmets to seal their union with a kiss.

After the wedding, a reception with coffee and cake was held at Camp Harmon on the Croatian side of the river.

"We are kind of short on supplies, so I've had to make do with what I got," said Spec. Scott Warner, a cook who spent more than 16 hours baking the couple's chocolate wedding cake.

At the start of the ceremony, Lt. Col. Steven Bourgeois of the 485th Corps Support Bn escorted Kris onto the bridge. She walked alone the rest of the way, past an honor guard and onward to Kevin's side.

"There's one thing that is very dear to me, and that's my father walking me down the aisle," Kris said. "I'll save that for him in December."

This tale ends on an ambiguous note, because it wasn't clear whether Kris and Kevin had a "honeymoon." None of the couple's friends were willing to discuss what they may have arranged for the wedding night.

"What honeymoon?" Kris asked with a straight face. "As long as we get to spend time together, that's all that matters at this point."