Love and a leap of faith 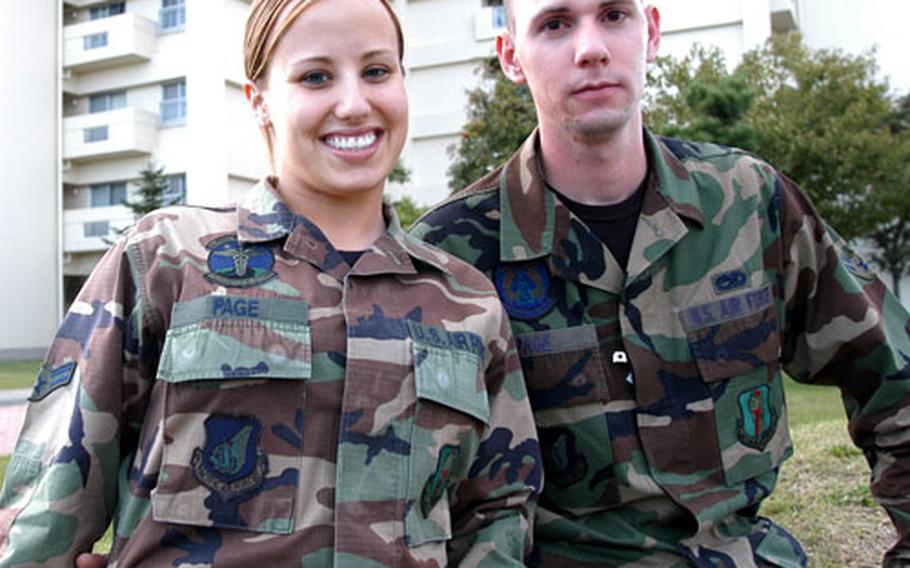 Airman 1st Class Elaine Page, 21, left, and Airman 1st Class Trent Page, 21, are navigating through the challenges of being a young married couple overseas at Misawa Air Base, Japan. They married in August, in part to avoid being separated by an assignment change. Elaine is a surgical technician with the 35th Medical Operations Squadron, and Trent is a voice network systems specialist with the 35th Communications Squadron. (Jennifer H. Svan / S&S)

Co-workers and friends tried to talk them out of it, told them they were rushing things. But for Elaine and Trent Page, both 21 and airmen first class at Misawa, time was not on their side.

Elaine, from Fort Campbell, Ky., was due to PCS this year. Declining orders as a young airman would be career suicide, she was told.

The Pages found that being overseas added to the stress of getting married.

They had to wait for a birth certificate &#8212; Elaine had lost hers &#8212; to arrive in the mail. Paperwork had to be submitted to the base legal office and local city hall to get their required Japanese marriage certificate.

Then there was being apart from their families. Elaine wished her mother was closer so she could talk to her more as she weighed her future.

&#8220;My family was really disappointed that we did the whole thing without them,&#8221; Elaine said.

It was only through the intervention of Elaine&#8217;s superintendent, a senior master sergeant, that the Pages were able to get joint spouse status in time and receive a Date Eligible for Return From Overseas extension, the couple said. They are to be reassigned in April 2009; where remains unknown.

After two weeks living in the dorms, the Pages moved into a base tower apartment and are settling into young married life.

Being newlyweds overseas is tough, she said. As single airmen, they went on off-base excursions in a subsidized Air Force program for single airmen E-4 and below.

As a young married couple, it&#8217;s hard to plan affordable dates with her husband, outside of going to the movie theater and trips to the mall, Elaine said.

The Pages are seeking marriage enrichment counseling from the base chapel. So far, it&#8217;s been helping, Trent said.

&#8220;My basic advice would be to put marriage on hold and to get some counseling to help them determine what is best for them,&#8221; he said in a written response.

The Pages are now planning a church wedding in December in Trent&#8217;s hometown of Austin, Texas.