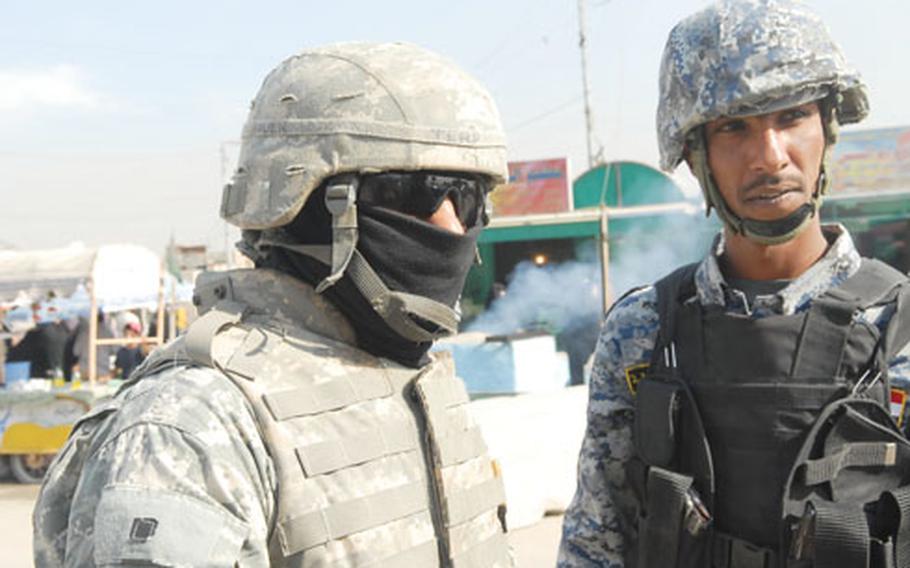 An Iraqi interpreter, left, translates a conversation between an Iraqi National Police officer and U.S. soldiers in Baghdad. American troops say interpreters’ English skills in Iraq have been uneven, leading to misunderstandings and hampering a mission that is shifting more to working with Iraqis on reconstruction efforts. (Photo by Heath Druzin/S&S)

BAGHDAD &#8212; An Iraqi man talking to an American soldier struggles to find the right word before giving up.

It would be an unremarkable blip in the conversation, except the Iraqi is an interpreter working for the U.S. military.

Interpreters are playing a central role as the U.S. military shifts its focus from fighting to reconstruction and relies heavily on face-to-face talks with everyday Iraqis and local leaders. This street-level diplomacy almost always involves one of the thousands of linguists who work with American troops.

"There is nothing more important than communicating with our Iraqi partners. &#8230; Having someone who gets the nuanced meanings correct, it&#8217;s so important because you can&#8217;t underestimate the price of misunderstanding, especially in a combat environment," said Navy Capt. Larry Jackson, who works with the Multi-National Security Transition Command-Iraq, the group that oversees the interpreter program.

To be hired as an interpreter for the U.S. military, applicants must pass a background check and take a multiple-choice test matching Arabic phrases with their English counterparts.

Global Linguists Solutions, a Virginia-based company, handles the $4.6 billion contract to hire linguists for the U.S. military in Iraq.

Officials with the company said it planned to hire about 7,000 Iraqis and 2,200 Americans as linguists.

A staple of many soldiers&#8217; patrols these days are so-called "close encounters," going door to door talking to Iraqis about everyday life and issues such as electricity, water and local police.

In addition, nearly every U.S. patrol is done jointly with elements of the Iraqi security forces, which include local and national police, the Iraqi army and the "Sons of Iraq," a group made up largely of former Sunni insurgents who have renounced violence.

Every one of these patrols requires an interpreter.

During a recent "close encounters" mission, an Iraqi taxi driver in Baghdad told a U.S. Army lieutenant through an interpreter that Americans treated Iraqis with a softer touch during the early part of the war, a surprising statement since U.S. soldiers were more likely to use force during the earlier, more violent phase of the war.

The lieutenant asked for clarification and the interpreter asked another question and gave a different, muddled response. Eventually, the lieutenant threw his hands up and moved on to the next question.

For U.S. troops, confusion like that is more than an annoyance.

"It&#8217;s definitely a hindrance to the mission," said 1st Lt. Wendell Jenkins, who is attached to the 1st Brigade Combat Team, 4th Infantry Division in Baghdad.

Jenkins said he has worked with interpreters who could barely make themselves understood in English &#8212; as well as those who not only translated verbatim but also helped bridge cultural divides with advice on customs. Jenkins said working with a competent interpreter means reaching more Iraqis more effectively.

Some troops, especially in Kirkuk province, where a complex ethnic and linguistic fabric makes interpreting especially tricky, said they have had little trouble with interpreters and most soldiers praised their interpreters for risking their lives to help coalition forces.

Jackson said the interpreter program has been positive overall.

"Frankly, [quality] varies from person to person," he said. "On the whole we have been very fortunate in finding so many Iraqis who speak English."

With interpreters regularly quitting because of safety concerns and translation quality already shaky, a rule instituted by the military in Baghdad in September banning the use of face masks for interpreters has added another potential deterrent to Iraqis interested in working for the U.S.

Interpreters have quit because of the rule and now some troops are looking the other way while their interpreters continue to wear the masks.

"They still have to live in Iraq," said a lieutenant who works in Baghdad and does not enforce the rule.

Military officials have said the rule is aimed at increasing the professionalism of interpreters.

Many interpreters fear for their lives and closely guard their identity, using aliases on the job and keeping jobs a secret even from close friends.

Several hundred interpreters have reportedly been killed since the war began.

One interpreter went as far as painting his face black on the job to protest the mask rule.

"If they said I have to take it off and I have to take the (sun) glasses off, I wouldn&#8217;t do this job," said an interpreter who goes by "Eddie" and still wears his mask.