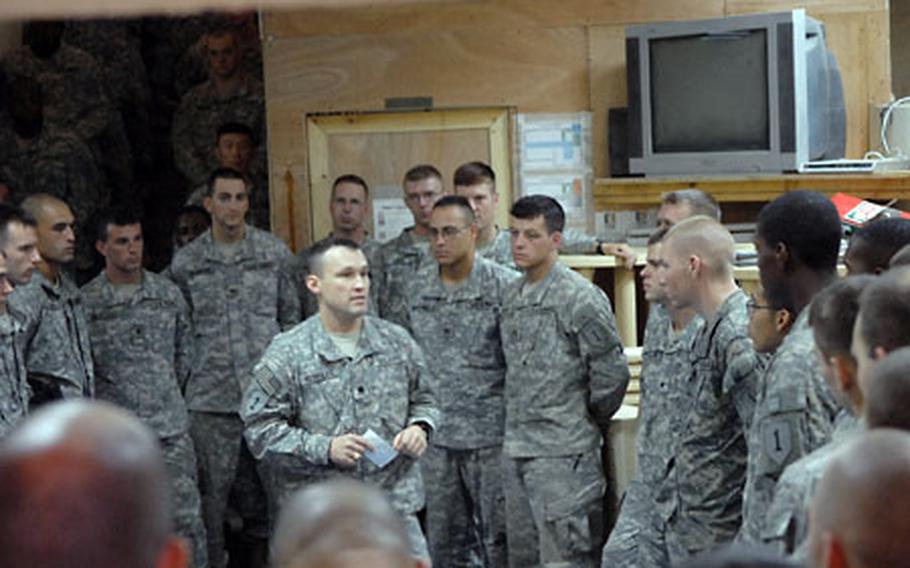 Lt. Col. John Reynolds, who recently took over as commander of the 1-26, talks to his soldiers on Saturday. The unit is expected to leave Iraq by the end of October. (Zeke Minaya / S&S)

Lt. Col. John Reynolds, who recently took over as commander of the 1-26, talks to his soldiers on Saturday. The unit is expected to leave Iraq by the end of October. (Zeke Minaya / S&S) 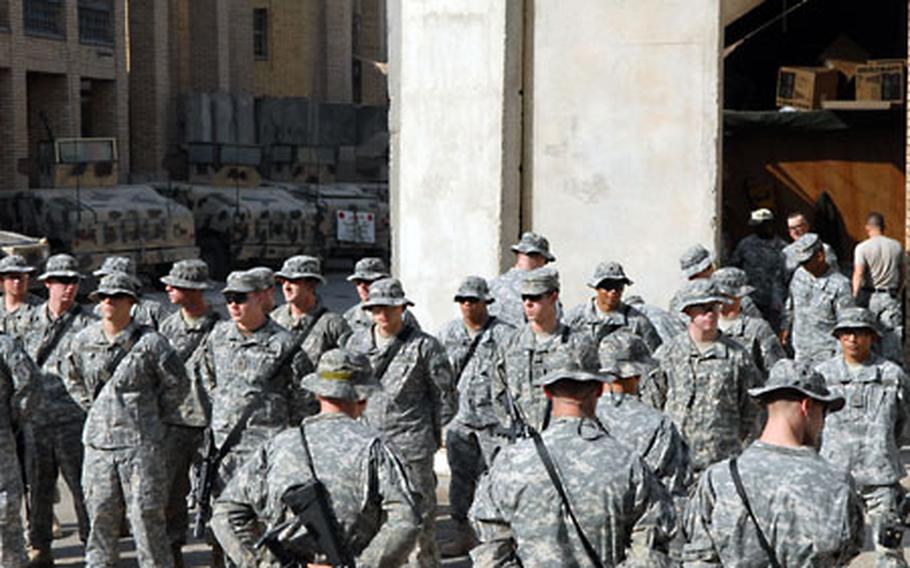 Members of Alpha Company, 1st Battalion, 26th Infantry Regiment gather for an awards and promotion ceremony Wednesday at Combat Outpost Old Mod in central Baghdad. The unit has remained close through a trying deployment that included losing their top two NCOs within weeks of each other this past summer. The 1-26 is slated to return home to their anxious families in October. (Zeke Minaya / S&S) 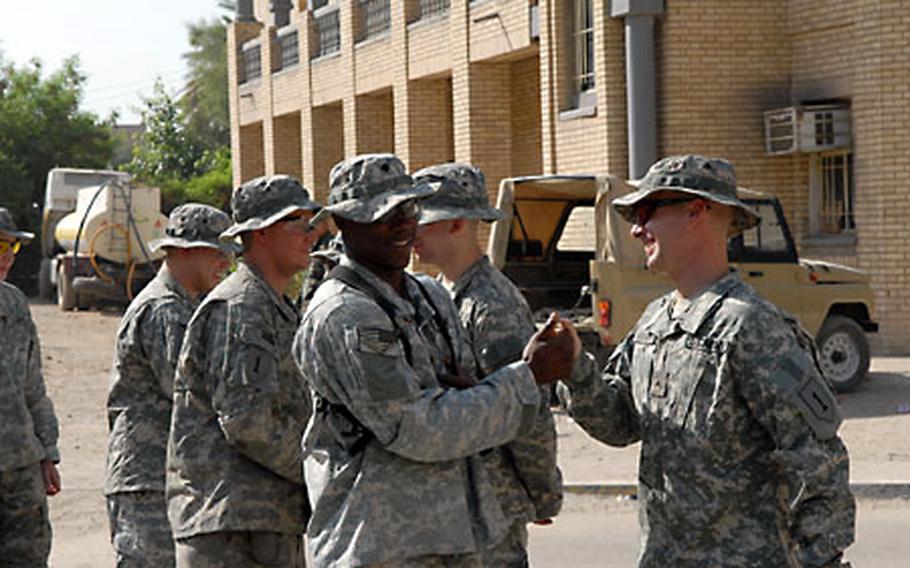 Spc. Shantell Mellette, 25, congratulates Michael Mahaffey, 29, from Tulas , Okla., on his promotion to corporal on Wednesday. The members of the 1st Battalion, 26th Infantry Regiment are a tight unit, with members often seen supporting each other. (Zeke Minaya / S&S) 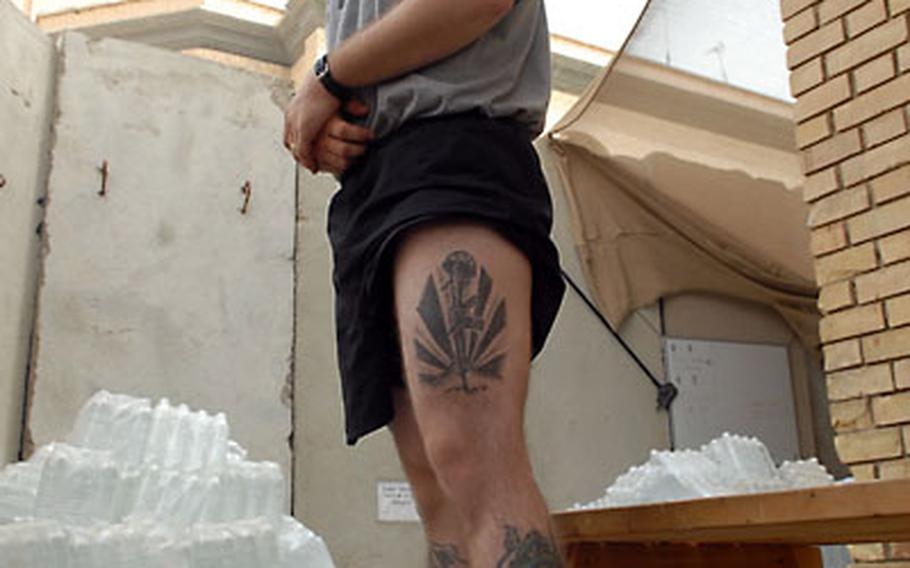 Sgt. Nathan B. Cantrell of the 1st Battalion, 26th Infantry Regiment displays his tattoo, a tribute to friends who have been lost in Iraq, on Saturday. The 28-year-old is from Lansing, Mich. (Zeke Minaya / S&S)

BAGHDAD &#8212; The latest losses are so recent that Staff Sgt. Trenton Tharp still expects to see his friends walk around the corner. He knows they are gone &#8212; Tharp is a soldier after all, and death is nothing new. But, for a little while longer at least, a part of him still wrestles with reality.

Deployment to Iraq hasn&#8217;t been easy for U.S. soldiers, and Tharp and other members of the 1st Battalion, 26th Infantry Regiment are no exception. The Schweinfurt, Germany-based unit has endured a stream of casualties. The losses have included key leaders in quick succession, leaving the tight-knit group little time for recovery.

To cope with the strain of a difficult deployment, the soldiers said they have turned to each other and the support of their families back home. They have leaned on a sense of camaraderie and community that has only continued to grow. The unit is expected to leave Iraq by the end of October.

The 2nd Brigade Combat Team, 1st Infantry Division &#8212; known as the &#8220;Dagger Brigade&#8221; &#8212; has sustained the greatest numbers of deaths of any Europe-based brigade; 56 troops have been killed in combat since the brigade deployed a year ago, mostly from roadside bombs. The hardest hit among Dagger&#8217;s battalions has been the 1-26 with a reported 27 losses.

During the year the 1-26 has been in Iraq, its soldiers have drawn dangerous assignments. They have rolled into, among other places, the heart of the eastern Baghdad sector of Adhamiyah, around the Abu Hanifa mosque, center of the extremist Sunni resistance in the area.

The 1-26&#8217;s Charlie Company alone has lost more than a dozen soldiers in the battle-scarred streets. Spc. Ross McGinnis was killed after diving onto a grenade and smothering the explosion, sparing the lives of four other soldiers. He was awarded the Silver Star and has been nominated for the Medal of Honor.

The 32-year-old from New Castle, Colo., estimates he has been hit by 14 makeshift bombs. The roadside attacks have damaged his vehicles and on occasions knocked him out.

Tragedy has had a sense of the dramatic when it comes to the 1-26. In June, on the same day the unit lost five men to a roadside bomb, commanding officer Lt. Col Eric Schacht&#8217;s teenage son was found dead in Germany. Schacht returned to Germany to be with his family.

In July, Master Sgt. Jeffrey McKinney was killed in a noncombat related incident that is still under investigation. Within a week of the loss of McKinney, four additional 1-26 soldiers, including another noncommissioned officer, Sgt. 1st Class Luis E. Gutierrez-Rosales, were killed by an explosive.

Tharp, who considered Gutierrez his best friend, led the group of soldiers who collected the remains of their fallen comrades.

Tharp said that he does not talk about Iraq with his sons. Nonetheless, they notice a difference in their father when he returns home.

Pfc. Shawn Tomey, a 24-year-old from Michigan, said that although his wife is also a great support, there&#8217;s only so much about his experience in Iraq he wants to share.

Tomey instead turns to his fellow soldiers, the only people who will fully understand what it has meant to serve in Iraq. Soldiers process their experience in different ways, he said. &#8220;Some guys go to the gym, some guys run, some guys are into video games, some guys talk about it, others don&#8217;t.&#8221;

But when called upon, soldiers are there for each other, he said.

Spc. Michael Collier, 20, of Auburn, Ala., said the feeling of battle-tested camaraderie is pervasive across the battalion.

Struggling with the deployment and sagging under the weight of the change in policy that has extended their tour of duty, several enlisted soldiers said they have had enough. One soldier, speaking anonymously for fear of retribution, said that several members of the battalion who had intended to make the military a career will instead opt out as soon as possible.

Lt. Col. John Reynolds, who took over the 1-26 after Schacht&#8217;s departure, said it is natural for soldiers to be angry during trying times. One of the stages of grieving, after all, involves feelings of hostility, he said.

The 1-26 has been operating at a high tempo since their quick deployment from Germany, Reynolds said. The loss of soldiers that others looked up to may have been the breaking point for some of the soldiers, he said.

To help soldiers through the tough transition, Reynolds instituted &#8220;Operation Healing Heart&#8221; a week after assuming command. The move was made to encourage soldiers to seek out counseling and morale-boosting services.

Sgt. Omar McQueen, of the 1st Battalion, 77th Armor Regiment, which is attached to the 1-26 task force, said a good NCO keeps an eye out on &#8220;the younger guys.&#8221; A month before their scheduled return to Germany in October, the battalion chaplain will offer classes to help ease the soldiers&#8217; reintegration into their families.

McQueen said that it is often when solders returns home that the experience of living in a war zone finally catches up with them.

He recalled landing in Germany after a previous deployment and seeing the gathered families waiting to embrace their loved ones. With the emotional scene playing out in front of him, he said, all he had just experience in Iraq came back to him &#8220;in about 15 seconds,&#8221; he said.

The rush of memories, he said, left him momentarily shaken with tears welling in his eyes and more unsure of himself standing in the safety of an airport in Germany than at any time he was in a war zone.