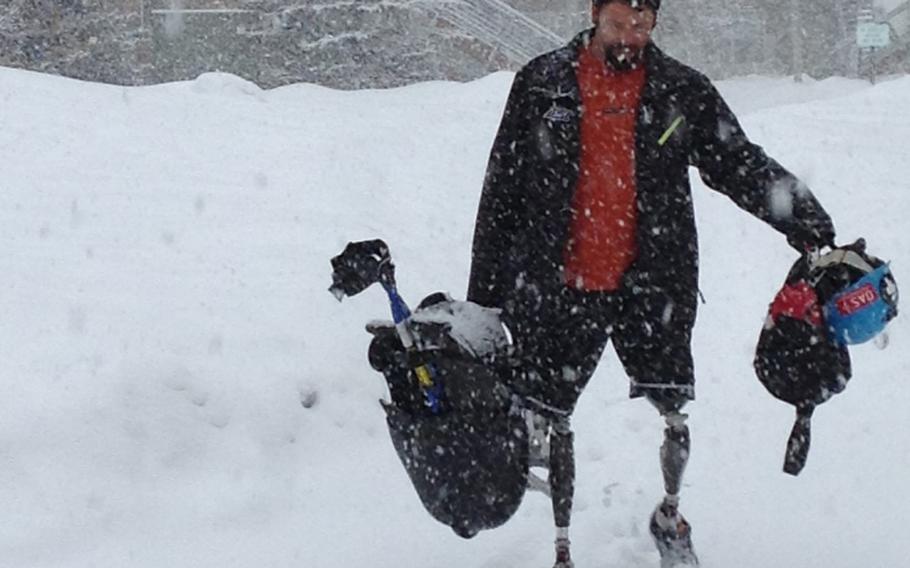 Retired Marine Joshua Elliott heads to the mountain to train as a member of the Aspen Valley Ski/Snowboard adaptive team. The program, a feeder for almost half of the U.S. Paralympic Ski Team, faces the axe after an annual VA grant for adaptive sports failed to materialize this year. Elliott and his teammates are fundraising to keep it and their Olympic dreams alive. (Photo Courtesy of Joshua Elliott)

Retired Marine Joshua Elliott heads to the mountain to train as a member of the Aspen Valley Ski/Snowboard adaptive team. The program, a feeder for almost half of the U.S. Paralympic Ski Team, faces the axe after an annual VA grant for adaptive sports failed to materialize this year. Elliott and his teammates are fundraising to keep it and their Olympic dreams alive. (Photo Courtesy of Joshua Elliott) 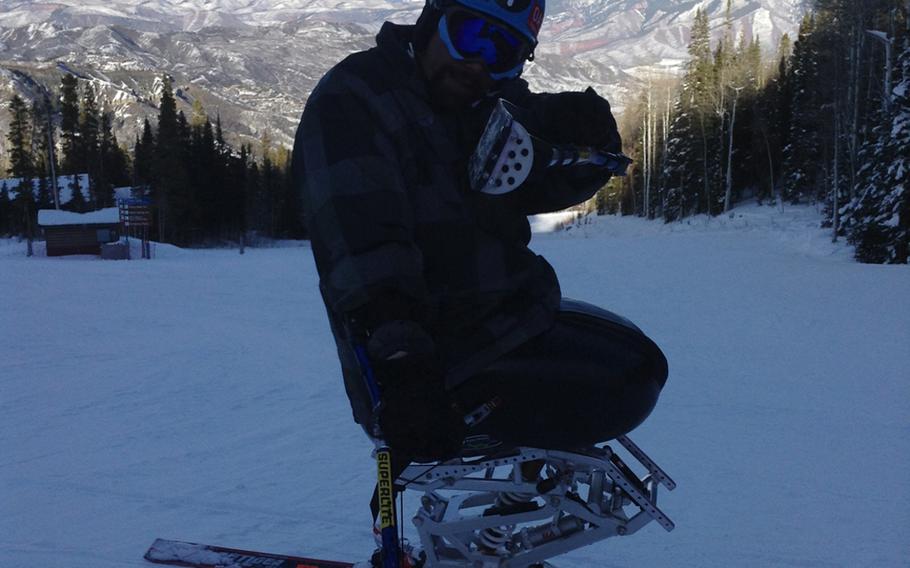 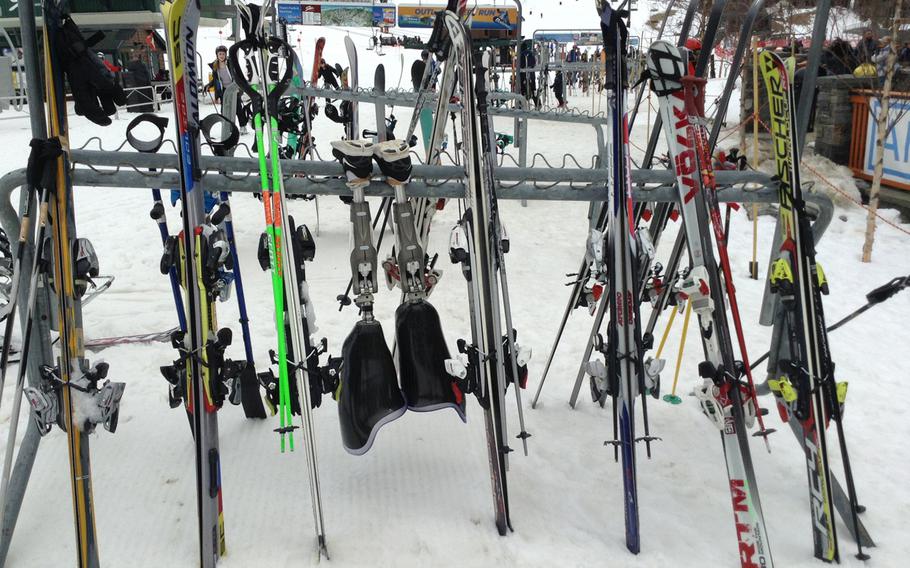 Retired Marine Joshua Elliott's prosthetic legs sit on the rack while he zips up and down the mountain on his monoskis. (Photo Courtesy of Joshua Elliott) 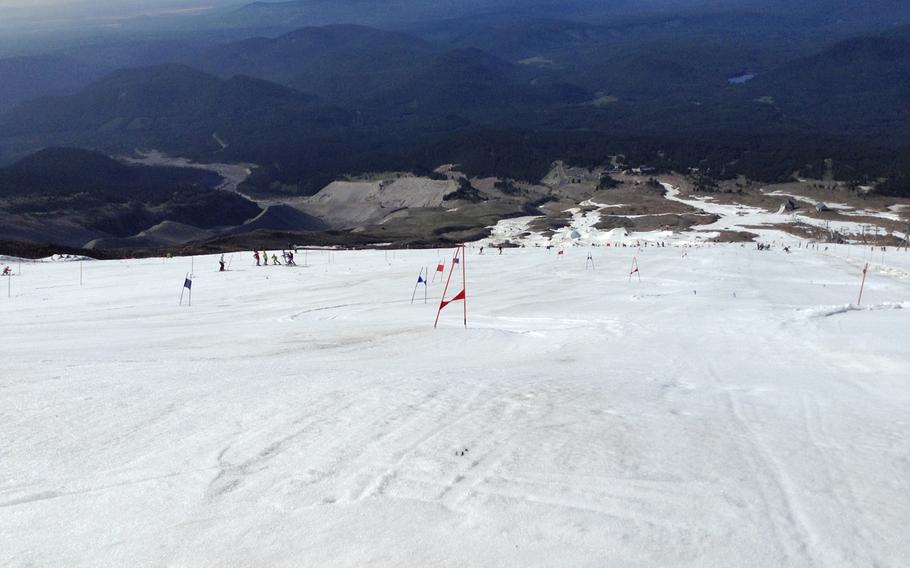 Aspen’s snow-covered mountains are Joshua Elliott’s sanctuary, a place where the double amputee can be free and feel closer to God.

But Veterans Affairs’ decision to withhold an annual grant for adaptive sports that keeps veterans like him on the slopes threatens to derail Elliott’s dreams for Olympic gold and to leave the retired Marine sergeant without a mission.

The Aspen Valley Ski/Snowboard Club’s adaptive program — one of the country’s pre-eminent programs for wounded veterans and a feeder for almost half of the U.S. Paralympic Ski Team — faces a $300,000 shortfall and might have to shut its doors Friday if funding isn’t secured for this year’s competitive season.

A number of Olympic dreams are on hold as Elliott, 32, and his teammates scramble to find money to keep the program going, even if just for one more month.

“[After my injury] I was afraid this was lost,” Elliott said last week from Aspen, where he is training. “I was questioning a lot of things. I was a little scared with this crazy life change … Now, here I am, competitive, looking at the Paralympics.”

The AVSC adaptive program was founded with wounded veterans like Elliott in mind but since has expanded to include a number of nonveterans as well, according to the AVSC website. Each year, the VA provides the U.S. Olympic Committee with grant funding for adaptive sports programs, Elliott said. About $500,000 goes to AVSC’s adaptive program.

The money pays for lodging, equipment, top coaches and training facilities, Elliott said. When the grant that funds the program didn’t come through last month, the nonprofit footed the bill to get the team through November. AVSC officials were then told the grant might not come at all.

VA officials have not responded to inquiries from Stars and Stripes seeking comment.

Currently, there are about 12 veterans, including wounded Marines and Army Rangers, on the team of about 20, according to Elliott and the AVSC website. Of the 20-member U.S. Paralympic Ski Team that will go to Sochi, Russia, next year, about eight could come from AVSC.

Elliott has been an avid snowboarder since high school. He speaks fondly of snowboarding in Japan during his last three-year tour to Marine Corps Air Station Iwakuni that ended in summer 2010.

On April 18, 2011, Elliott and his metal detector led Company E, 2nd Battalion, 8th Marines into Afghanistan’s deadly Sangin to talk with local residents and to gather intelligence. After clearing a roof for an overhead watch position, Elliott was on his way back down when he stepped on an IED.

“I felt myself actually flying,” Elliott told Stars and Stripes shortly after the incident, during which he fell through the hole the IED made in the roof.

Weeks of countless treatments, tests, X-rays, surgeries and skin grafts followed. Months later, he was working out, determined to stay in the Corps but frustrated by his new limitations.

“I was determined to snowboard,” Elliott said. “But I couldn’t do what I wanted to do. I came down the mountain each time in tears.”

Then someone introduced him to mono-skiing. Within a couple of hours, he was in control and making turns. He was free again.

Elliott went to his first race in March 2012, then was invited to try out for the AVSC adaptive team. He thought his tryout was a disaster, but one of the coaches said something that stuck.

Elliott was invited to move to Aspen to join the team. The Corps was supportive, and his superiors helped him separate. He now spends his days going up and down the mountains, swimming and working out.

Now in his second season, Elliott is finishing in the middle of the pack in competitions with skiers from 14 countries. His sights are set on the Paralympic games in Pyeongchang, South Korea, in 2018 — if the AVSC adaptive program is still around.

“I absolutely love skiing,” Elliott said. “I’m going to try and get a gold medal.”

Learn more about Elliott here, and more about monoskiing here. You can donate to the adaptive program here.