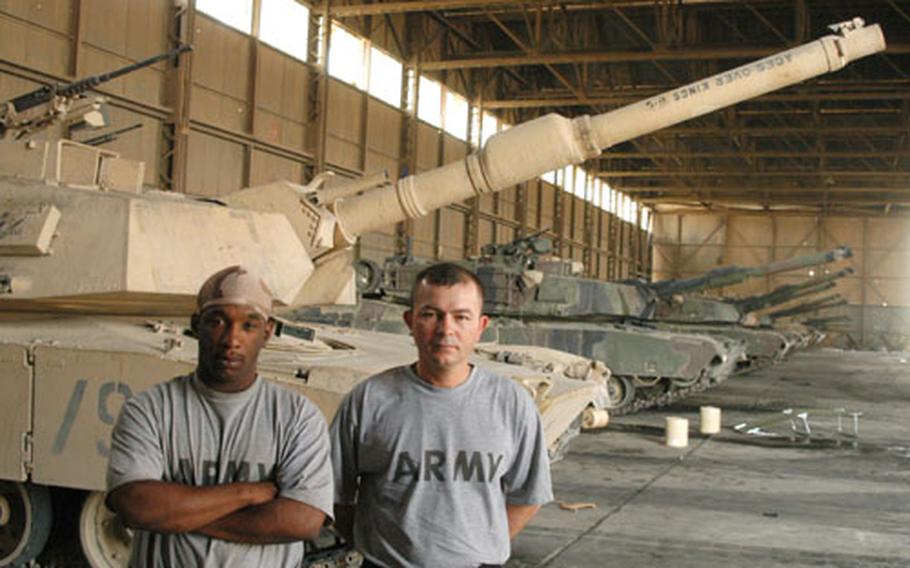 The 41-year-old Puerto Rican father died Sunday in Khalidiya, when an anti-tank mine exploded beside the M1A1 Abrams tank he commanded. It was the 2nd Brigade Combat Team&#8217;s first combat fatality since the unit deployed to Iraq from bases in South Korea. Company A commander Capt. Chris Plekenpol, 27, of Dallas, said Vaillant survived an encounter with an anti-tank mine just one day before he died.

That day, Vaillant &#8212; a 15-year career noncommissioned officer and Operation Desert Storm veteran &#8212; destroyed a mine by shooting it with a .50-caliber machine gun before it could detonate, he said.

The next day, Vaillant was patrolling the same street, poking his head out of the hatch on top of his Abrams when the anti-tank mine detonated, Plekenpol said.

Vaillant&#8217;s ammunition loader, Pfc. Stanley Cuffee, 22, of Richmond, Va., was also peering out of the tank when the attack came. Cuffee escaped injury, but the force of the blast threw him back inside the turret, knocking his communications gear off his head.

Moments later, the body of his commander landed on top of him, Cuffee said.

The young tanker was in shock until his gunner, Sgt. David Olansoto, 39, of Puerto Rico, ordered him to get it together and pull security with the tank&#8217;s M240 machine gun, Cuffee said. When Cuffee talks about what happened, his eyes have the haunted look of a man who has seen hell.

When he looks at the damage that the anti-tank mine did to the Abrams, which sits in a hangar beside a similarly mutilated Humvee, Cuffee knows he will never feel as safe inside a tank as he once did, he said.

The anti-tank mine is one of the most powerful bombs being used by insurgents. Even the heavily armored Abrams could not withstand its fury.

The right side of the tank bears the scars of its ordeal &#8212; gaping holes big enough to push a large wrench through are visible along the entire length of the vehicle. Shrapnel appears to have penetrated the heavily armored turret and ripped big holes in the inch-thick armor plates guarding its tracks. Bulletproof glass around the hatch where Vaillant was standing is shattered, and one of the track wheels has a large chunk missing.

The other 2-72 tanks are parked nearby, including the tank that Vaillant&#8217;s crewmembers transferred to the day after the accident so that they could continue patrols.

Cuffee, who arrived in South Korea shortly before Vaillant last November, said one of his last memories of his commander is of Vaillant collecting toys, soccer balls and baseball gloves to give to Iraqi children shortly before his last mission.

&#8220;Me and him had our differences but every time he chewed me out for not doing what I was supposed to do, he would come back and apologize. He has done a lot for me,&#8221; he said.

Olansoto, the gunner, recalled eating with Vaillant at a Puerto Rican restaurant in South Korea. Losing a comrade hurts, but Olansoto is staying focused on his mission, he said.

Company A commander Plekenpol said he and Vaillant shared a strong Christian faith.

Vaillant, who was a minister in the Assembly of God church, often spoke to other soldiers about his faith, Plekenpol said.

The 2-72 tankers have all been affected by the death but are determined to push on with their mission, he said.

Vaillant is survived by his wife, Michaela, and daughter, Sarah, 12, who live in Vine Grove, Ky.