Looking to finish with a bang, Talisman Saber drills kick into high gear 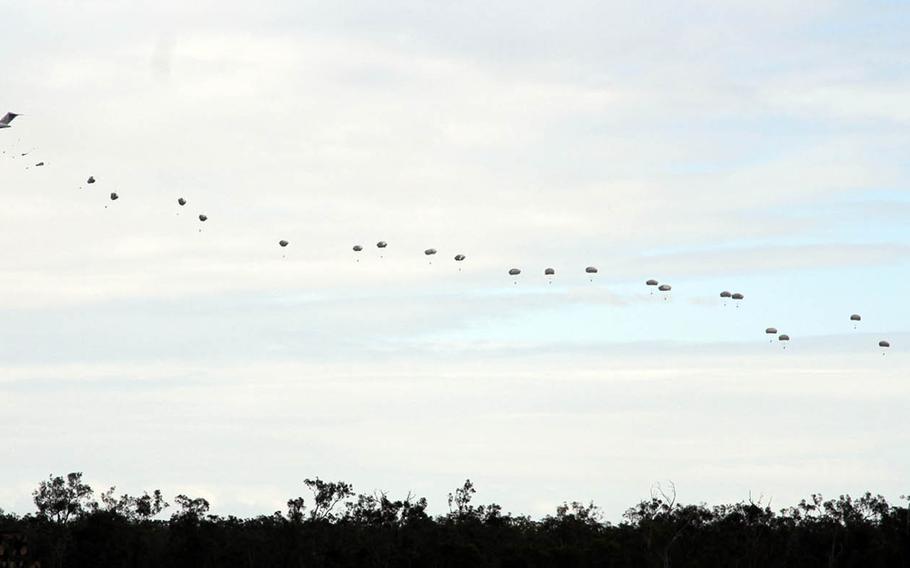 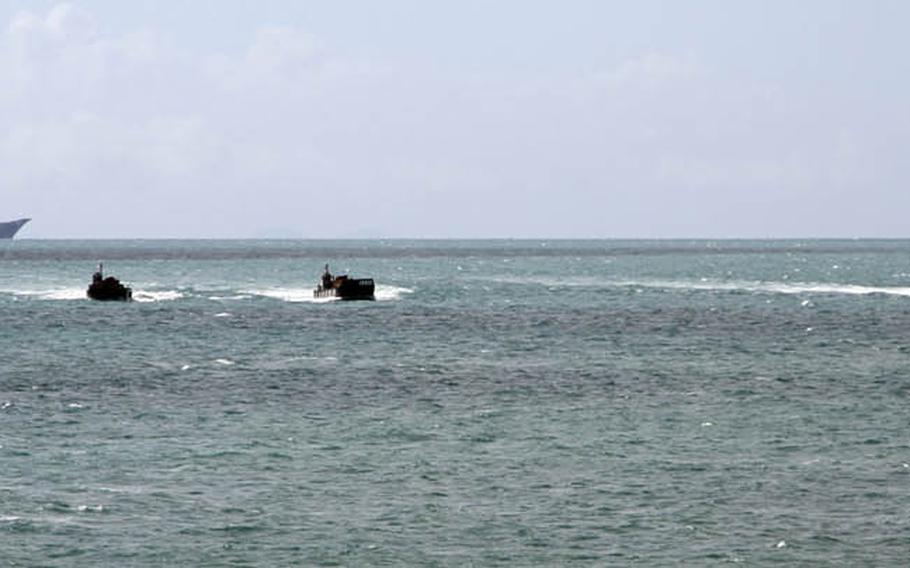 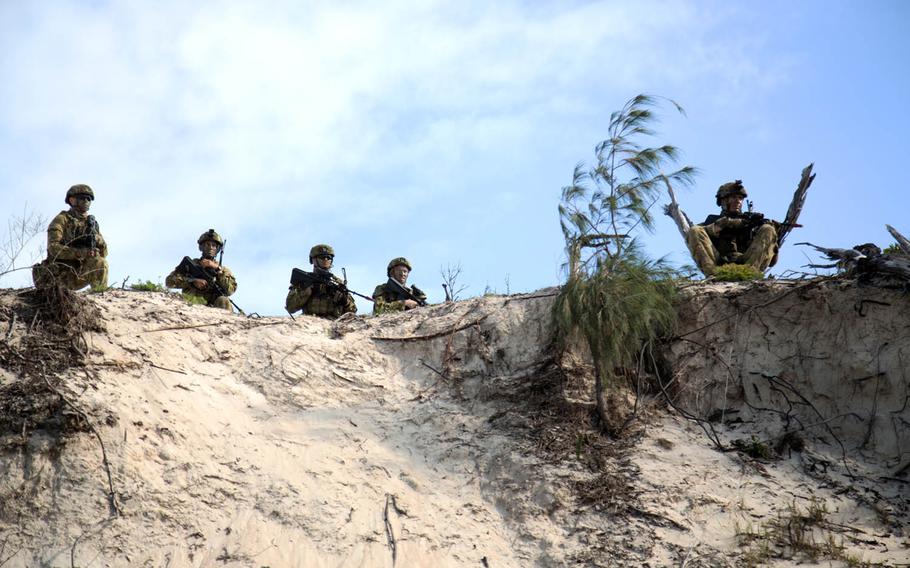 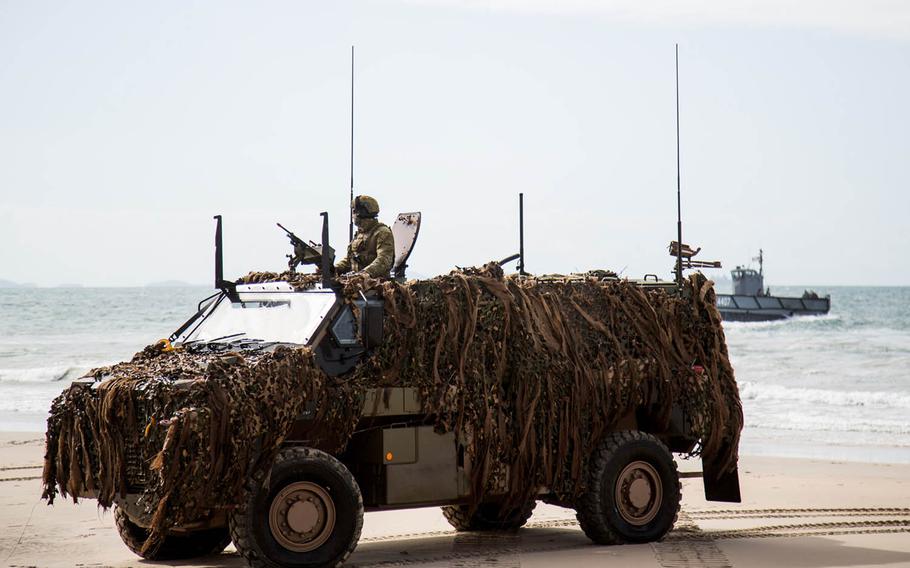 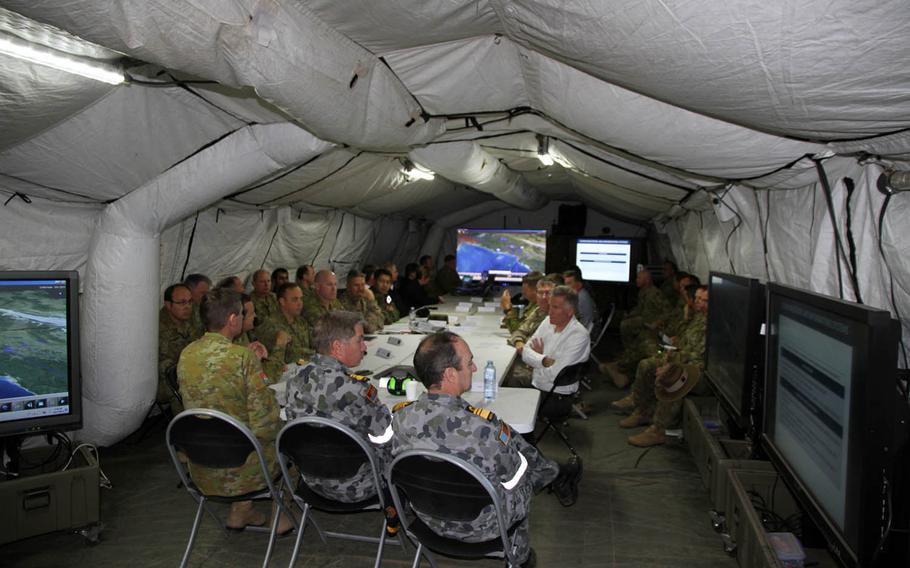 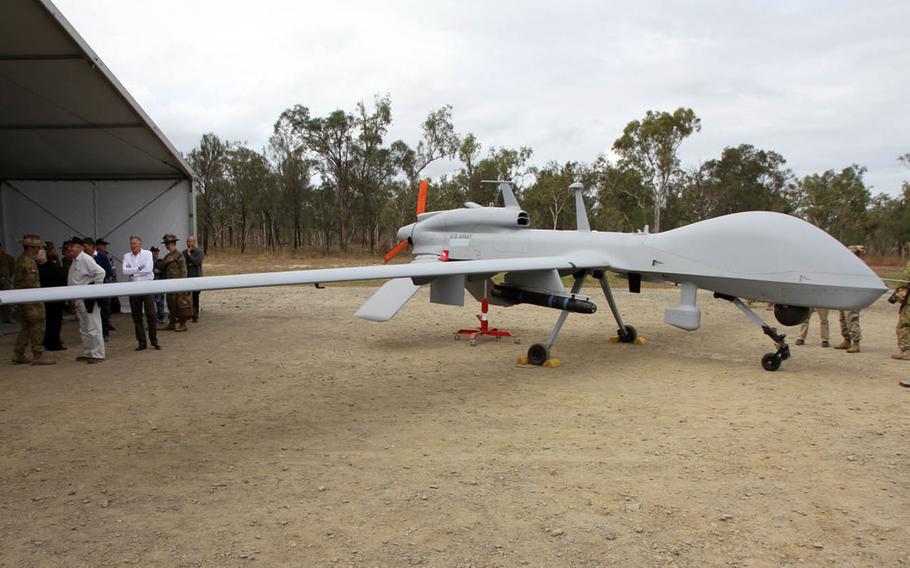 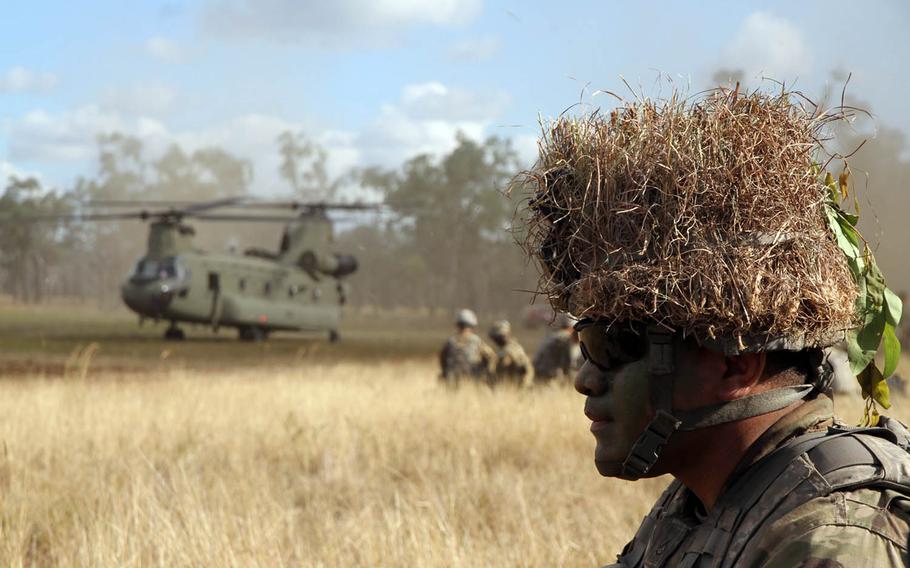 SHOALWATER BAY TRAINING AREA, Australia — Australian Army Lt. Benjamin Sloane smiled as he contemplated the similarities — both cultural and tactical — he has with his U.S. military contemporaries taking part in Talisman Saber drills Down Under.

For one thing, he and an American platoon commander learned they both have messy cars and big trucks.

“But in terms of tactics, down to the soldier level, a lot of it is quite similar,” said Sloane, a direct-fire weapons support platoon commander from 1st Battalion, 3rd Brigade.

And their differences complement each other nicely, he added.

That concept has been on sharp display since the monthlong joint warfighting exercise kicked off in late June.

Now in its seventh iteration, Talisman Saber takes place in Australia but is planned jointly by the two allies.

The imaginary foe — which enjoys home-field advantage — has capabilities that mirror major military powers like China and Russia.

More than 33,000 Australian and American troops are participating in the exercise, which includes simulated cyber operations, Special Forces, naval and air movements, bombardment, acts of deception, amphibious landings and assaults from the sea and air.

New Zealand, Canada and Japan are also participating this year.

Sloane said the U.S. Marines employ both an anti-armor-specific platoon and a machine-gun-specific platoon, while his soldiers must be well-versed in all organic tank-killing weapons.

“It makes it excellent that we can then augment each other and employ a really devastating effect to the target,” he said Thursday at Williamson Airfield while waiting for the exercise to kick off for his unit. He said they would be working closely with U.S. Marines.

Working together Talisman Saber’s substantial ground portion began in earnest with a division force-on-force fight at Shoalwater. The drill is dynamic and ever-changing to reflect real combat, complete with ambushes, roadside bombs and halted troop movements.

Enemy combatants slip in and out of uniform, set up next to hospitals and mosques, and pretend to be refugees as scenarios are thrown at commanders of all levels.

Entire bases have been constructed in the Australian bush to replicate the actual warfighting experience and to facilitate the medical and culinary needs of so many troops.

“This activity is the most advanced major military activity that will be conducted in the world this year,” said Australian Army Maj. Gen. Gus McLachlan, controller of the exercise in Shoalwater Bay and the Australian Commander of Forces Command. “We’re really here to develop interoperability.”

McLachlan said the aviation battle group, for example, is a combined and integrated unit of American and Australian pilots flying in the same tactical formations.

U.S. tilt-rotor MV-22 Ospreys are among the more than 200 aircraft that are participating.

Amphibious Landing This exercise marked a historical achievement for the Australians, who demonstrated their new amphibious capabilities that have been years in development.

On Thursday, Australian soldiers from 2nd Battalion, The Royal Australian Regiment demonstrated it for the first time as they came ashore at Langham Beach, Stanage Bay, in their largest amphibious landing since World War II.

An advanced party waited on the beach, keeping a small footprint, steering the landing craft toward them. As the small craft hit the sands and the doors lowered, Australian soldiers poured into the training area, accompanied by armored personnel carriers.

The landing craft then crept back into the waves and chugged out to sea as helicopters buzzed overhead and fighter jets made passes along the beach.

“It is a world-class capability,” McLachlan said.

The Marines made a similar landing the previous evening.

A couple of hours before the Australian amphibious landing, parachutes filled the skies over Shoalwater to drop 300 paratroopers from the U.S. Army’s 4th Brigade Combat Team (Airborne), 25th Infantry Division, based at Joint Base Elmendorf-Richardson, Alaska, along with the Australians and Canada’s Princess Patricia’s Canadian Light Infantry, near Williamson Airfield.

These soldiers, who had arrived in Australia on a 14-hour flight from Alaska aboard four U.S. and two Royal Australian Air Force C-17A Globemasters, immediately joined the fight.

The training area at Shoalwater Bay is demanding and dangerous because of environmental concerns, poisonous spiders and snakes, Australian planners said. A soldier already died there this year in an accident.

But one of the main concerns is the heat, Australian army doctor Lt. Col. Jamie Phillips said during a brief at the massive, fully functional trauma hospital that had been constructed at Williamson Airfield.

“Soldiers get hot and they get hot very quickly up here in Queensland.”

Temperatures are in the high 70s and low 80s, during the day and drop as low as the 40s at night.

Phillips said it has been a decade since the training area’s last snake-related incident, so they are not overly concerned with them.

Testing new technologies New technologies are also being tested at Talisman Saber, and the progress is being “aggressively” analyzed in real time, McLachlan said.

“Adversaries don’t have the ability to project combat power the same way as U.S. forces,” Whitman said. “Realistically, the enemy has no counter to our capabilities, so in a real-world situation – whenever, wherever, however – we’ll be able to provide our assault capabilities.”

Whitman said he enjoyed working with the partner nations.

“I’m extremely impressed with our coalition partners’ capabilities and their professionalism,” he said.

The sentiment was reiterated from the other side as well.

“We get along really great,” he said.

This week, as the battle for Shoalwater Bay continues, Marines will conduct another amphibious assault, partnered with the Navy.