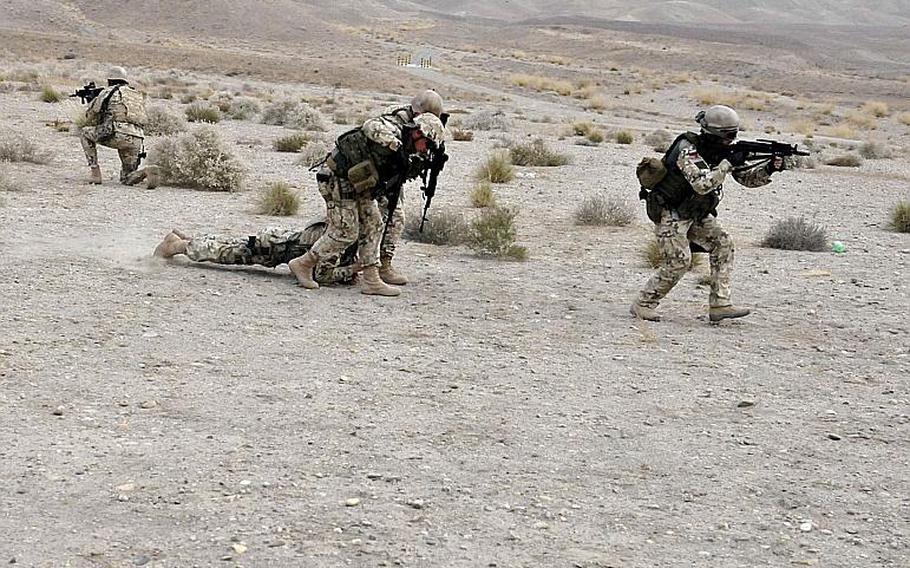 Infantry soldiers from the Polish army's 21st Mountain Brigade conduct drills near TB Gamberi in Afghanistan in 2014. Allies are developing plans to prepare for future battlefields that experts believe are more likely to be urban. (Vance Trenkel/U.S. Army)

STUTTGART, Germany — The U.S.-led NATO alliance says it isn’t adequately prepared for urban combat and is asking defense contractors for help in reshaping its fighting forces.

The allies see capability gaps in close-quarters warfare, where enemies can create confusion as they mingle with large populations, according to a contract proposal posted by NATO’s Norfolk, Va.-based transformation headquarters.

For three years, NATO’s transformation office has worked on a strategy for coping with global population shifts.

“Studies, based upon global demographic trends, suggest that an increasing percentage of armed conflicts will likely be fought in urban surroundings,” the NATO contract proposal stated.

NATO wants an “overarching” concept to explore and raise awareness of threats, the proposal said.

A first draft of the new “NATO Concept” is wanted by the end of the year and will be subject to further testing and validation.

The contract coincides with the NATO Military Committee’s tasking to Allies Command Transformation to produce a conceptual study on urbanization and its military implications.

“(It) is a matter of when, not if, the military will be required to operate in urban environments,” NATO’s urbanization project team stated.

Army chief Gen. Mark Milley has also spoken frequently in recent months about pivoting from a force structure largely designed around wars to be fought on the plains of northern Europe and deserts of the Middle East.

NATO’s increased focus on urban conflict comes as the alliance continues to send troops into Afghanistan, where allies have waged a long, bloody campaign in mostly rural terrain.

While coalition troops are no longer involved in day-to-day combat, they are training Afghan forces struggling against a durable Taliban force that has evaded defeat during the 16-year campaign against it.