Looking for a cheap vacation? Try Guam — but boil the water 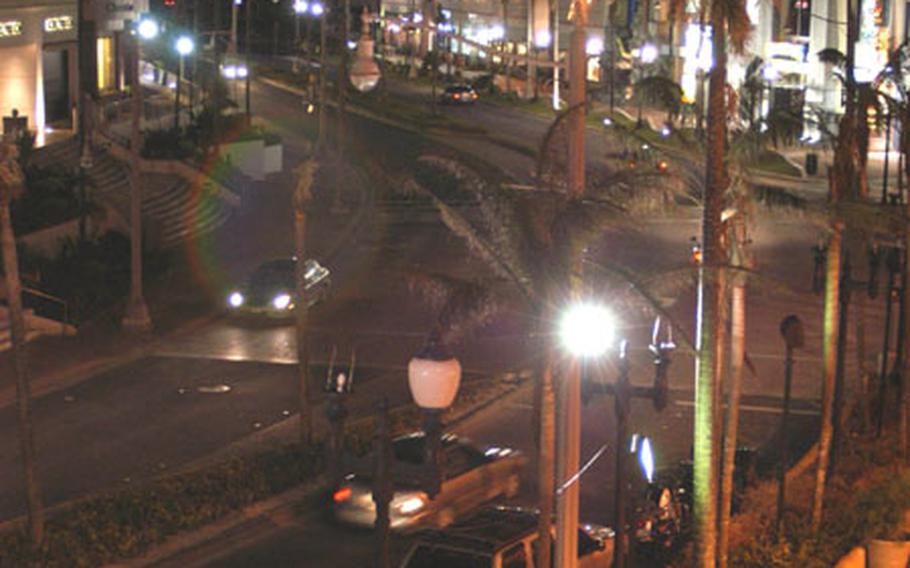 The tourist district on Guam with all the bars, restaurants and nightclubs is very slow following a super typhoon just a little over a week ago. (Jason Carter / S&S)

Airfare to Guam is dirt cheap during the holidays, since Super Typhoon Pongsona scattered tourists Dec. 8.

Ticket prices are about $380, including taxes, round-trip from Tokyo, through the beginning of January, said Toshi Muto, a travel agent with Night Flight near Yokota Air Base, Japan.

Guam officially reopened its doors to tourists on Dec. 20.

But, is it wise to travel there, so soon after 180 mph winds knocked out power and the island&#8217;s ability to treat tap water?

It depends on whom you ask.

Guam Gov. Carl T.C. Gutierrez says yes. In a letter published last week in Japanese on Guam&#8217;s visitor bureau&#8217;s Web site, Gutierrez said Guam was able to recover swiftly due to help from private groups and governments such as the United States and Japan.

&#8220;After the typhoon, I, as the governor of the state, met with leaders of the tourism industry and government officials and reached a conclusion that we are confident to welcome overseas visitors from Dec. 20. Please visit Guam &#8230; and enjoy our people&#8217;s warm welcome and hospitality,&#8221; he wrote.

&#8220;The travel agencies are scared of sending people right now&#8221; because the agencies might receive complaints, Muto said.

Some tour operators on the island are accepting customers over the holidays, Muto said, &#8220;but others say they won&#8217;t have any until March.&#8221;

Besides the typhoon, the U.S. territory faces another crisis. The Justice Department filed a complaint last week in U.S. federal court charging that Guam&#8217;s water system is contaminated and unsafe. The department is seeking a court order to force the utility to produce safe drinking water and to properly dispose of wastewater and sewage.

Despite the public relations nightmares, the island&#8217;s business leaders are wooing tourists.

Most of Tumon, the main tourist area along the beach, is back on commercial power and has ample water supply, Yingling said.

The island lost about 30 percent of its hotel rooms due to damage from the typhoon but, &#8220;frankly, we were kind of in a bind before the storm. Since Sept. 11, hotel occupancy was a little soft,&#8221; he said.

Some hotels claim to be offering post-typhoon discounts.

At the Hyatt, for instance, a room for two adults through Dec. 30 is $190 a night, plus an 11 percent tax. A reservations clerk said this was a special, post-typhoon discount for overseas guests. Rooms regularly cost $325 a night.

The Hyatt, however, is full New Year&#8217;s Eve, due to group bookings from Japanese tourists six months ago who never canceled, a hotel clerk said.

Other hotels also are full Dec. 31. A clerk at the Holiday Inn said rooms are booked solid because it&#8217;s housing federal workers helping with recovery efforts on the island.

The Outrigger Guam Resort in Tumon still has rooms on New Year&#8217;s, but at $280 plus tax; no discounts will apply.

&#8220;Our rooms are fine. We have island power, cable, hot water, and our pool and restaurant open today,&#8221; a reservations clerk said Tuesday.

Yingling said tourists should expect a few inconveniences if visiting now. Not all restaurants are open and some shopping outlets still are shuttered. People also should call ahead to check on availability of rental cars because federal workers on the island are using many of them.

The airport is fully operational, although some carriers are running reduced flights to Guam, Yingling said.

During the typhoon, the airport sustained about $42 million in damage, and about 10,000 tourists were stranded. They were flown out within 24 hours, with many diverted to Saipan, Yingling said.

&#8212; Hana Kusumoto contributed to this story.