Soldiers from the 94th Engineer Battalion pose during their flight from Kuwait to Germany. Some of the troops are among the first to complete a full 365-day tour in Southwest Asia. (Rick Scavetta / S&S)

Soldiers from the 94th Engineer Battalion pose during their flight from Kuwait to Germany. Some of the troops are among the first to complete a full 365-day tour in Southwest Asia. (Rick Scavetta / S&S) 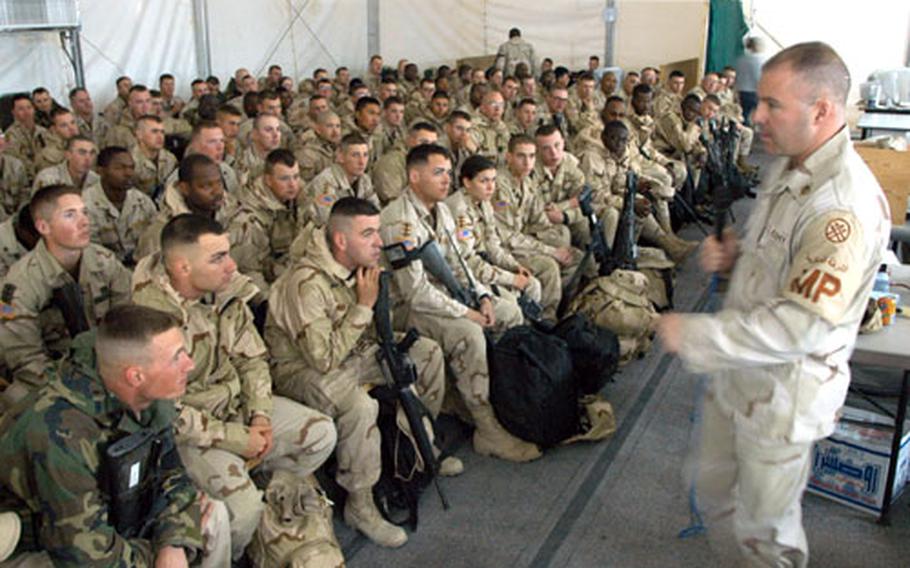 Soldiers from the 94th Engineer Battalion from Vilseck, Germany, listen as Staff Sgt. Lewis Walton, 37, of Johnston, R.I., runs down the list of prohibited items during customs inspections in Kuwait. (Rick Scavetta / S&S) Editor&#8217;s note: Stars and Stripes reporter Rick Scavetta is embedded with the 94th Engineer Battalion, a Vilseck, Germany-based unit that has returned from Iraq following a yearlong deployment. This is the first in a series of articles on the soldiers&#8217; return to Germany and their reintegration into &#8220;normal Army life.&#8221;

RAMSTEIN AIR BASE, Germany &#8212; Getting home was typical Army travel for a group of soldiers from the Vilseck, Germany-based 94th Engineer Battalion.

The engineers are among the first U.S. soldiers to complete a full 365-day tour in Southwest Asia &#8212; a milestone that will be repeated in coming months as thousands of troops rotate out of Iraq. The 137 troops arrived in Germany over the weekend after being run through a gamut of customs regulations, logistical snafus and seemingly endless pit stops.

But knowing that home was the final destination, the soldiers kept their spirits up during the 36-hour odyssey.

The battalion, known as the Wolverines, was one of the first V Corps units activated for duty last January. During the early stages of the war, the engineers supported the 3rd Infantry Division&#8217;s drive to Baghdad.

But while the 3rd ID left Iraq by September, the Wolverines were assigned to several construction projects there, including improvements to the notorious Abu Garib prison. They also led Task Force Neighborhood, a mission to clean trash and sewage from the streets in the Iraqi capital.

In December, the construction team moved to Camp Virginia, a desert outpost north of Kuwait City, to get ready for the return to bases in Vilseck, Hohenfels and Grafenw&#246;hr.

By mid-January, the bulk of the battalion&#8217;s soldiers had flown to Germany, leaving only a few soldiers behind to load vehicles and equipment onto cargo ships at the Port of Shu&#8217;aibah. By last week, the last few trucks had been squeezed aboard, and officers planned to fly home.

During their final days in Kuwait, the soldiers had mixed feelings about leaving. Their actual departure date was still in question. Some hoped to stay past Sunday to gain an extra month of tax-free wages. Others wanted to go home. Many were concerned about missing the Super Bowl.

Harris, a Jamaican native who leads a construction crew in Company B, left his family at his previous duty station in Colorado Springs, Colo. He never got the chance to take leave and visit. Now, he hopes to bring them to Germany, he said.

Eventually, word came down to move to the airport. A wall of dusty green duffle bags, at least two for each soldier, needed loading onto Kuwaiti trucks. Forming a human chain, the soldiers quickly packed the gear and boarded commercial buses for the 45-minute drive to Camp Wolverine, the Army&#8217;s redeployment station near Kuwait International Airport. It was late evening when engineers began their customs and amnesty briefings.

Also, there was to be no drugs or drug paraphernalia. Several soldiers have tried to pass with Arab water pipes, known as hookahs, Walton said.

No Cuban cigars, either, although troops were quick to point out that they are legal in both Kuwait and Germany. Customs agents confiscated them regardless, explaining that the U.S.-prohibited stogies can&#8217;t legally travel aboard a U.S. aircraft.

Troops can, however, take back Iraqi money and some Iraqi military gear with no questions asked.

Soldiers then loaded into an amnesty tent with their gear. Each carried two duffle bags, a rucksack and one piece of hand-carried luggage. This was their opportunity to hand over any illegal items.

Then they were ordered into a second tent, where they unpacked everything. Gloved military police officers sifted through each soldier&#8217;s things.

The engineers were then locked down for about eight hours in a &#8220;sterile area,&#8221; cold tents surrounded by gates. They were reminded not to eat anything but military rations that were provided and not to smoke. Smoking privileges were canceled after a tent fire, an MP told the engineers.

Their final night in Kuwait, the engineers huddled together in frigid tents to await their flight. They talked in small groups, bundled in Goretex jackets.

The MP said a tent fire was also the reason that Kellogg Brown & Root disconnected the hot-air ducts that warm the sterile area tents. During the coldest hours of the night, soldiers crammed around three small radiators for warmth.

Early Friday, sergeants stirred soldiers and herded them onto waiting buses. They drove the runway and watched as fellow engineers loaded a North American 757-200 with bags. Three hours passed, and the soldiers aboard the buses drifted off to sleep. Apparently, the unit had too many bags for the cargo hold. About 50 bags were left behind for another flight, with a lieutenant to watch over them.

Finally, they boarded the commercial airliner carrying their rifles and pistols.

Officers, senior sergeants and troops who loaded the bags got the first-class seats.

Most of the engineers were asleep at 9:20 a.m., when the wheels lifted off the Kuwait tarmac. The jet banked over the desert camps they called home for the past month and during the buildup last year.

Many slept through the cabin crew passing out headphones for the in-flight movie. A few stirred to try the breakfast &#8212; runny scrambled eggs with mushrooms and tomatoes.

The &#8220;direct flight&#8221; to Ramstein Air Base would actually include a layover at Naval Air Station Sigonella in Sicily. It took nearly six hours to reach Sicily. As they arrived, smokers rushed to a small gazebo outside the terminal. Hungry soldiers ran to Burger King.

Waving goodbye to the small Italian island, the engineers took off on the final leg of their journey, a 90-minute flight across the Mediterranean Sea, over the snow-capped French Alps and into the frost-covered plains of southwest Germany.

The last rays of sunlight blasted orange light across the horizon as the plane touched down at Ramstein. Soldiers threw fists in the air and screamed wildly upon arrival.