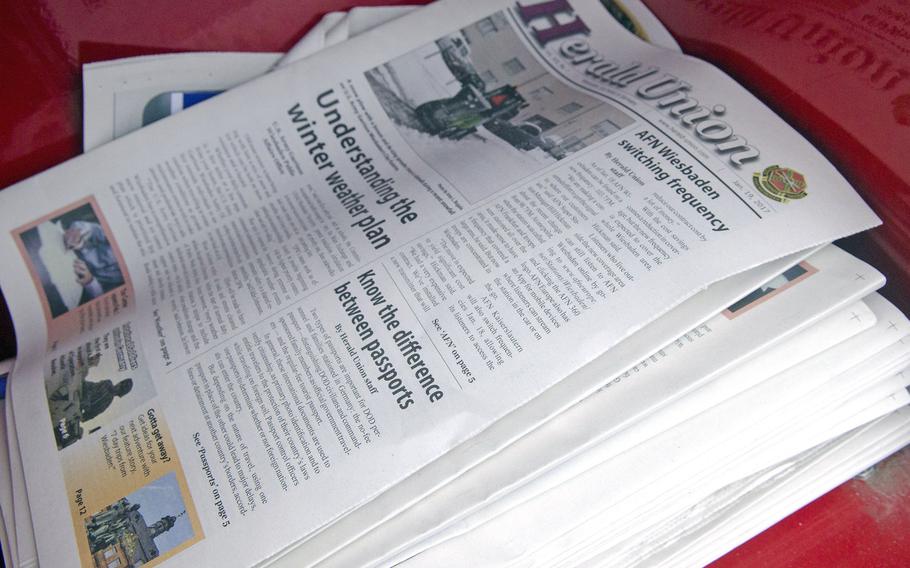 Buy Photo
A copy of the Herald Union, official newspaper of U.S. Army Garrison Wiesbaden, on display in a kiosk. The Herald Union and fellow garrison paper the Stuttgart Citizen will no longer be available in print after their next editions, respectively March 30 and 23, 2017. (Dan Stoutamire/Stars and Stripes)

WIESBADEN, Germany — The company responsible for printing the official newspapers for some of Germany’s largest U.S. military installations is discontinuing printing for two of its papers because doing so is no longer economical.

The final print editions of the Stuttgart Citizen and the Wiesbaden Herald Union will be available March 23 and 30, respectively.

Both papers, which are free for readers and include paid advertisements, have run for decades, the Citizen for nearly 50 years and the Herald Union under its current name for nearly 20, when the Post-Union and Hessen Herald consolidated.

The contractor — Kaiserslautern-based AdvantiPro GmbH, which has held its contract for nearly 10 years — said that it became economically unworkable to continue printing the biweekly Citizen and Herald-Union.

“Unfortunately due to the rising cost of newspaper publication in smaller areas, the business element of the publication became unsustainable,” said Bret Helenius, a company manager.

The Kaiserslautern American, the third newspaper printed by Advantipro, will continue its print operations for the foreseeable future, he added.

All three English-language publications are printed under contract with U.S. military authorities.

“The size of the Kaiserslautern Military Community, in relation to the cost to produce the publication, remains financially viable,” Helenius said.

Meanwhile, both Stuttgart and Wiesbaden are considering their options, including finding other printers.

“A printed newspaper remains a valid need for our garrison, and we are developing new strategies to fulfill that need,” said Jacob Corbin, a spokesman for USAG Wiesbaden. He added that for the past two years, 6,175 copies of each edition have been printed and distributed.

Both garrisons said they’ll continue to utilize other methods to inform those living there, including social media and their websites. Online newsletters are also a possibility in the near future.