Long road to setting a new tone at Baumholder 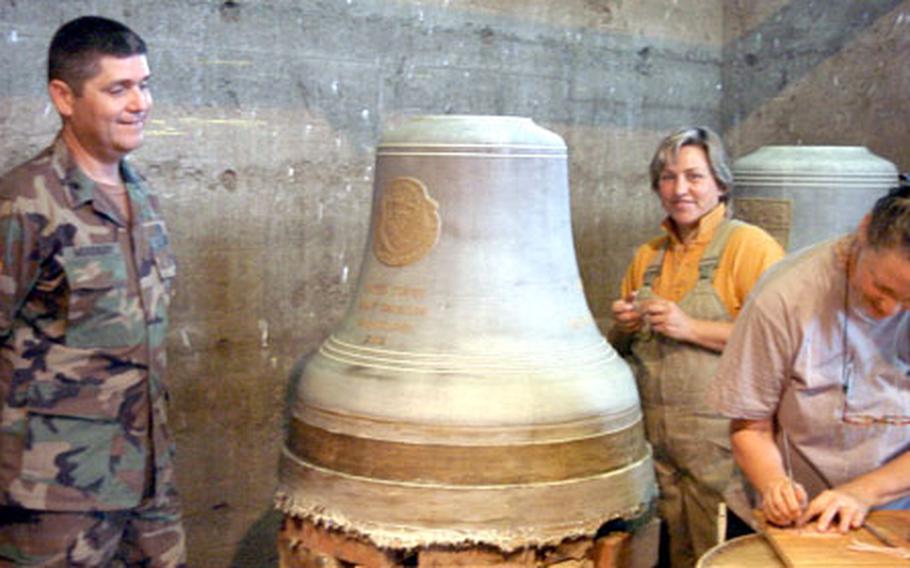 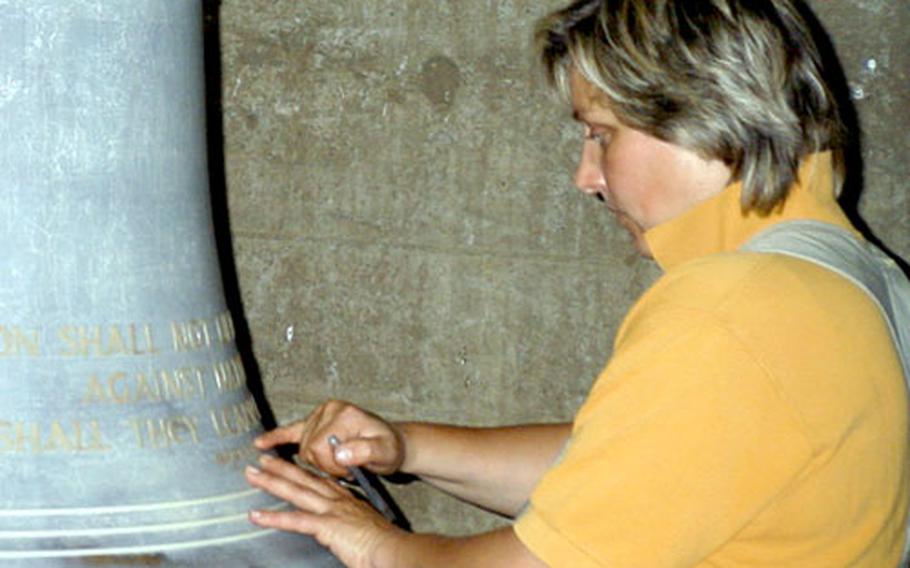 A German craftswoman epoxies the inscription on the English-language bell. The larger of the two bells has the crest of the 222nd Base Support Battalion, the chaplains&#39; regimental crest and a quote from the Book of Isaiah — “Nation shall not lift up sword against nation, neither shall they learn war any more.” (Tina Müller / Rheinland-Pfalz govt.) 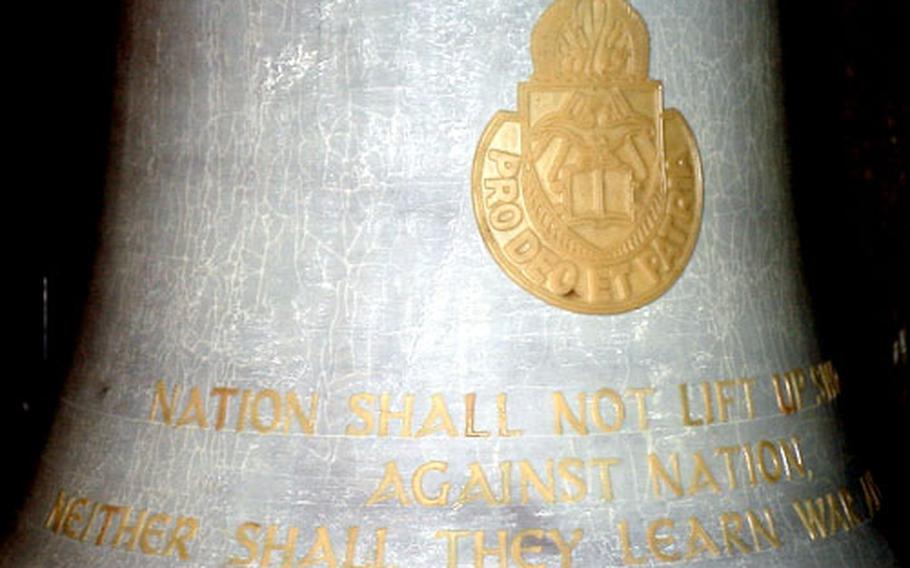 A close-up of the larger bell. (Tina Müller / Rheinland-Pfalz govt.)

BAUMHOLDER, Germany &#8212; He understands what a church bell looks like. He understands how it works and how the vibrating bronze makes its mellifluous peals.

Nah, just a little 15th century technology. But considering the obstacles and uncertainties faced in creating two new bells for the Baumbolder community &#8212; partly a result of the lengthy funding process, partly because casting bronze is more art than commerce &#8212; a miracle or two couldn&#8217;t hurt.

The bells are to be placed in the base&#8217;s renovated Chapel No. 1. If all goes well, they will first ring from the chapel steeple during a ceremony on Easter 2006.

The saga of Baumholder&#8217;s bells started three years ago, with plans for a complete renovation of the chapel, said Woodbery and Bob Baumgardt, 222nd BSB director public works. As part of the work, it was decided the bell-less belfry should be equipped with two bells to summon the faithful.

Once the bells are in place, &#8220;they become the voice of God in this community,&#8221; said Woodbery, a United Methodist Church chaplain.

But there&#8217;s still a long way to go before that happens. If you think you go to www.churchbell.com to order a bell and it is delivered by truck 10 days later, think again.

Bell-making is a medieval craft few still ply. Bellmeisters once wandered Europe, making bells onsite at the great churches and cathedrals until transportation technology advanced enough to move the bells&#8217; massive weight, according to Eberhard Blug, the BSB contracting officer.

The Eifeler Glockengiesserei Mark workshop in Brockscheid, which is making the bells for Baumholder, is still owned by its founding family, dates back to 1620 and has been at the same location since about 1840, Blug said. It is one of only six bell foundaries still operating in Germany, according to the Munich-based Goethe Institute.

Building a bell starts with a core of bricks. Craftsmen shape the mold by slathering a sticky daub mixture of clay, cow hair and horse manure around the core, Baumgardt said.

Next comes a layer of graphite, then fat and wax atop the graphite that will melt out as the hot bronze pours in. Finally comes an outer covering of more the clay/hair/manure mixture.

The pouring process requires such precision that workers must monitor the amount of oxygen in the bronze, Baumgardt said. Once at the Eifeler Glockengiesserei works, too many people gathered to watch the pouring, &#8220;and there wasn&#8217;t enough oxygen left for the metal,&#8221; he said.

Woodbery said Lt. Col. Michael Cerrone, two chaplains before him, selected the design and all-important tone for the bells. Cerrone&#8217;s successor, Lt. Col Frank Bruning, chose the inscription from Isaiah, Chapter 2, Verse 4: &#8220;Nation shall not lift up sword against nation, neither shall they learn war any more.&#8221;

The castings were buried in sand. On Saturday they were scheduled to receive the pouring of molten bronze. If the delicate casting process goes awry, &#8220;the mold is lost. The casting is lost. Everything,&#8221; Baumgardt said. &#8220;They&#8217;d have to start all over.&#8221;

Only when workmen dig out the bells six weeks from now will they know if there are any cracks or flaws, Woodbery said.

If they are sound, ultimately, the bells will toll for the Army&#8217;s presence in Baumholder, from which the approximately 5,000 1st Armored Division soldiers are scheduled to leave for the United States in 2007.

What would happen to the bells then?

As far as Baumgardt is concerned, the bells belong to providence.