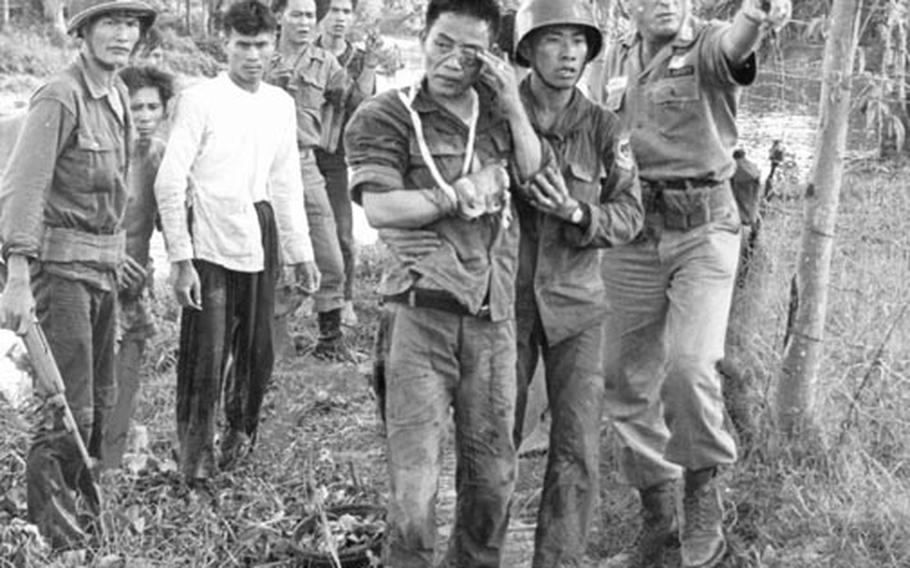 Buy Photo
Maj. Robert M. Campbell, right, an American adviser from Fayetteville, N.C., points the way to a helicopter that will bring a wounded Vietnamese ranger, at center, to a hospital. The soldier lost part of his right hand to a Viet Cong booby trap. (Steve Stibbens/Stars and Stripes)

The ticket for that long ride home doesn't come cheaply in the Republic of Vietnam. This man, a Vietnamese ranger, gave his right hand.

All morning he had chased the Viet Cong guerrillas through the muddy swamps and rice paddies. Twenty had been killed and six captured. Everything was going well.

He sat on the edge of a canal to have a smoke. Relaxed, he pushed his hand against a concealed booby trap. There was a muffled explosion. Powder and smoke blinded him for a moment.

Then he looked down and saw only the stump of what was once his hand. It didn't even hurt &mdash; at least for a few minutes.

A call for help went out and soon an H-21 helicopter from the 57th Light Helicopter Transport Co., was circling overhead.

The wounded man was carried 100 yards up a canal in a sampan to a strategic hamlet where a helicopter waited to take him to a hospital.

The veteran ranger stood proudly, smiled momentarily &mdash; then collapsed. He was carried to the waiting helicopter &mdash; and the long ride home from the war.