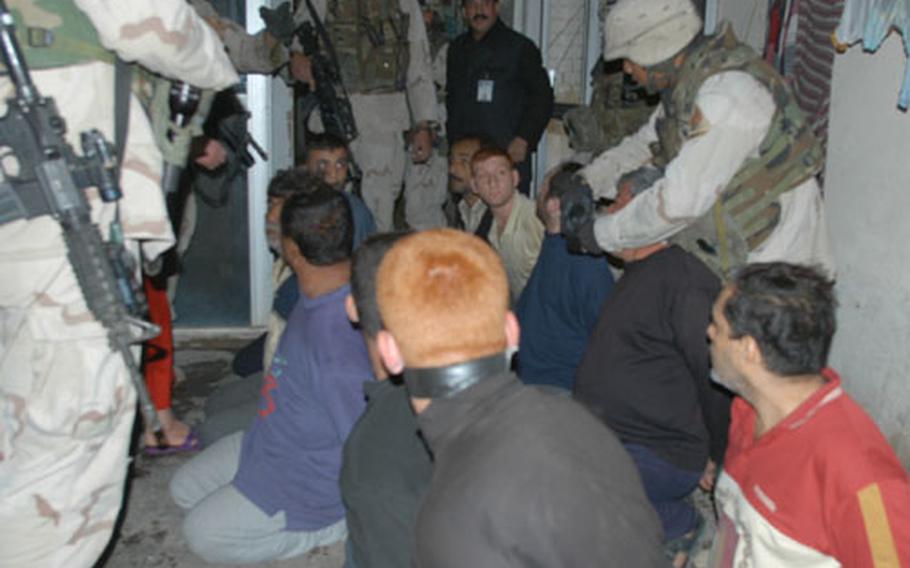 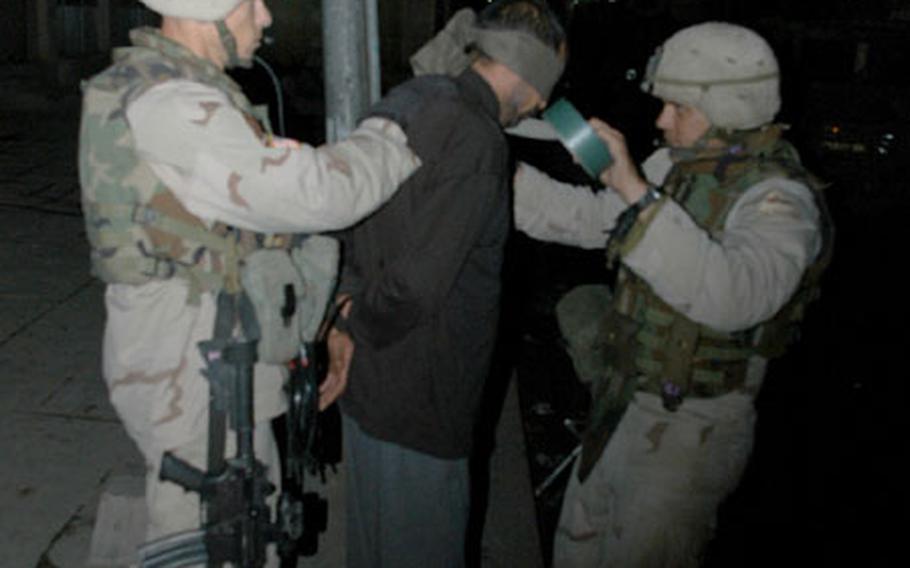 In Baghdad, Iraq, U.S. soldiers use tape to blindfold a suspect in the Nov. 2 downing of a Chinook helicopter. Scout platoon troops of 1st Armored Division&#39;s 1st Battalion, 36th Infantry Regiment, carried out early morning raids Nov. 29 on two Baghdad houses and seized this man at the second house. The helicopter was downed near Fallujah, killing 16 U.S. troops and injuring others. (Franklin Fisher / S&S)

BAGHDAD, Iraq &#8212; Scout Platoon rolled back into its compound after 1 in the morning, ready to get some sleep.

But hold on, the troops from the 1st Armored Division&#8217;s 1st Battalion, 36th Infantry Regiment were told. They may have to go out gain.

An informant had come in with information on a man he said was involved in shooting down a CH-47 Chinook helicopter Nov. 2 near Fallujah. Sixteen American troops were killed and 26 injured.

The scouts had just returned from a four-hour, house-to-house search in the back alleys of an old section of Baghdad, seeking illegal weapons. There, in a short, sudden engagement with insurgents driving a stolen car, four battalion soldiers were wounded and the car&#8217;s two occupants killed.

Now, back at Firebase Melody, the scouts stood at their Humvees in the cool air and talked about their wounded buddies. Then, shortly before 2 a.m., came the word to mount up.

&#8220;We had an informant come in who was involved himself in terrorist activities,&#8221; Maj. Paul Kreis, 38, of Cincinnati, the battalion&#8217;s operations officer, told Stars and Stripes later about the Nov. 28 mission.

Members of the battalion&#8217;s parent brigade were brought in to question the man, and judged his information &#8220;credible,&#8221; Kreis said.

As he would throughout the raid, Livingston radioed instructions to the scouts, speaking quietly into a small mouthpiece.

Shortly after 2, the column of Humvees swung out the gate and made its way through the trash-strewn boulevards of Baghdad. With them were an interpreter and the informant.

Minutes later the vehicles turned left into a quiet street of four- and five-story buildings, killed their headlights, and stopped. It was about 2:20.

Within moments, the troops were inside the building and began bringing the occupants down to its entrance. They had the men kneel in several rows, tying their hands behind them with plastic &#8220;zip&#8221; cuffs. They put the women on the other side, standing.

Meanwhile, concealed in the darkness of the lead Humvee and waiting to play his part in a crucial next step, sat the informant. In the driver&#8217;s seat, unhidden, was an American captain.

Their method would be simple: When the troops were ready, they would lead the military-age males, one at a time, out the building and down the sidewalk to a spot the informant would be able to see them.

A soldier would shine a flashlight in each man&#8217;s face. The informant would tell the captain whether that man was the suspect. The captain would relay the response to the soldier, who would then retain or release the suspect.

Livingston said the troops were careful to keep the informant hidden. &#8220;A guy comes forward with information, we&#8217;ll do whatever it takes to protect their identity,&#8221; he said.

&#8220;So far, 10 military-age males, six females, six kids,&#8221; one soldier reported as the troops emptied the building of occupants.

The troops taped the men&#8217;s mouths. When some women started talking, the soldiers silenced them.

Each time a soldier led a man down the sidewalk and put the light in his face, there was a pause. An instant later the captain would say, &#8220;No.&#8221;

Then the informant said one of the women knew the suspect. She agreed to lead them to a building where he might be.

The woman got into a vehicle and at 3:25 a.m. the convoy left, pulling up five minutes later near a rundown structure behind a 5-foot brick wall.

A sergeant and another scout began blindfolding and gagging the suspect, who was barefoot, looked in his early 40s, and wore a charcoal shirt over what looked like baggy blue pajama pants.

The man gave no resistance and said nothing.

The troops led the man to a trailer hitched to a Humvee and the scouts headed back to their battalion compound.

The man was held for further questioning.

Pulling out just before 4 a.m., Livingston summed up the night&#8217;s events: the house-to-house search and the raids they&#8217;d just made.