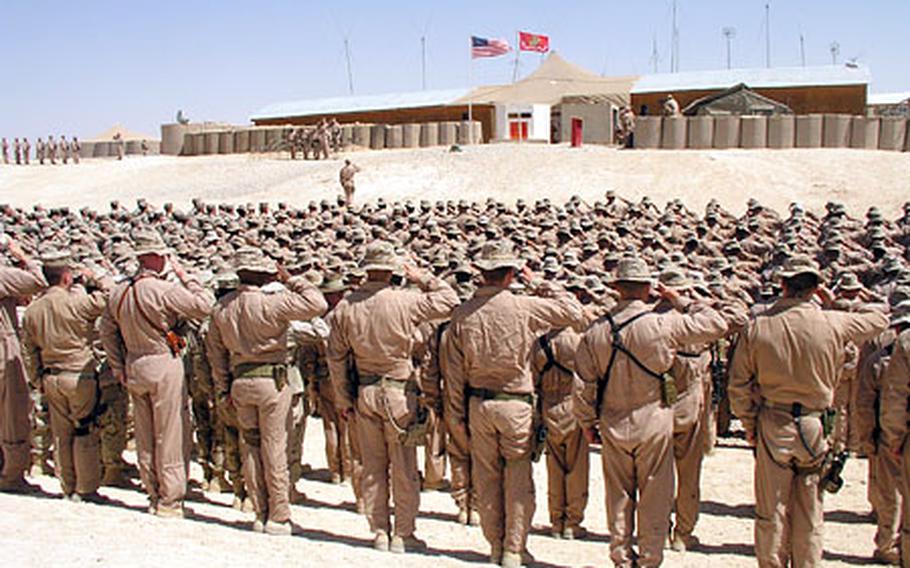 The Marine, Lance Cpl. Cristian Vasquez, 20, of Coalinga, Calif., was honored during an outdoor memorial ceremony Tuesday morning by his unit, Task Force Highlander. He had been assigned to the Quick Reaction Force Platoon, Headquarters and Service Company, 1st Light Armored Reconnaissance Battalion.

Three other Marines of the same platoon were wounded in the same Aug. 2 engagement, task force officials said.

The casualties occurred about 20 miles south of al Qaim, when the Marines dismounted their light armored vehicles and approached a number of oil trucks on the chance that the occupants might be engaged in oil piracy, a task force official said.

The engagement occurred on the first full day of Operation Punisher II, which is ongoing. The operation has involved task force elements in long-distance raids into a remote desert region in a hunt for insurgents, their safe havens and weapons caches, and for criminals, including oil pirates.

The ceremony went forward on a sunny, windy morning in front of the task force headquarters complex.

Not far from the flagstaffs, a helmet set on top of an upside-down rifle was positioned to represent the fallen Vasquez. A pair of combat boots was set below the rifle, which was affixed to a bayonet thrust into a base of green sandbags. A set of identification tags was attached to the display.

A recording of the hymn &#8220;Abide With Me&#8221; began playing, the strains of an organ and bagpipes sounding thinly but clearly over the formation.

Lt. Col. Kelly Alexander, the task force commander, gave the first of three brief eulogies of Vasquez, but began with an &#8220;update&#8221; on the wounded.

Two of them, he said, have been treated at Landstuhl Regional Medical Center in Germany and &#8220;will be home.&#8221;

Task Force officials said they are checking thoroughly reports that Vasquez died heroically, placing himself at risk to aid fellow Marines during the engagement, a report echoed when it was 2nd Lt. Christopher M. Ferguson&#8217;s turn to eulogize Vasquez.

Ferguson, who was wounded in the attack, said Vasquez &#8220;made the decision to sacrifice his own life&#8221; for a comrade.

For an hour and a half after the ceremony, Marines, soldiers and sailors of the task force stood voluntarily in line for their turn to approach the helmet and boots display. Throughout that period, the hymn &#8220;Amazing Grace&#8221; played continually over the loudspeaker.

&#8220;Everyone who knew Cristian will remember his ready smile, his understanding, his compassion and his honor,&#8221; the program read. &#8220;His infectious attitude and kind spirit touched everyone he met.&#8221;