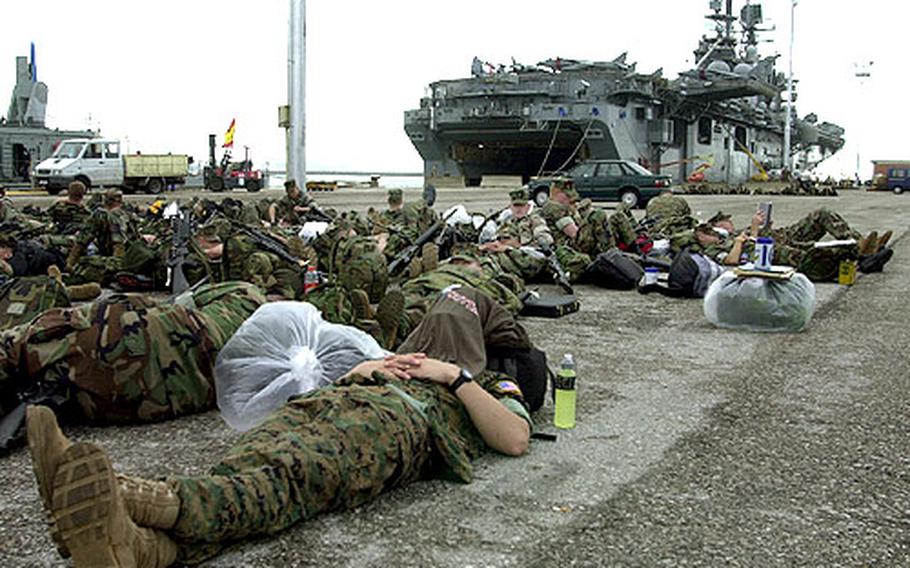 A group of Marines rests pierside on Tuesday with the USS Iwo Jima in the background at Naval Station Rota, Spain. (Scott Schonauer / S&S)

A group of Marines rests pierside on Tuesday with the USS Iwo Jima in the background at Naval Station Rota, Spain. (Scott Schonauer / S&S) 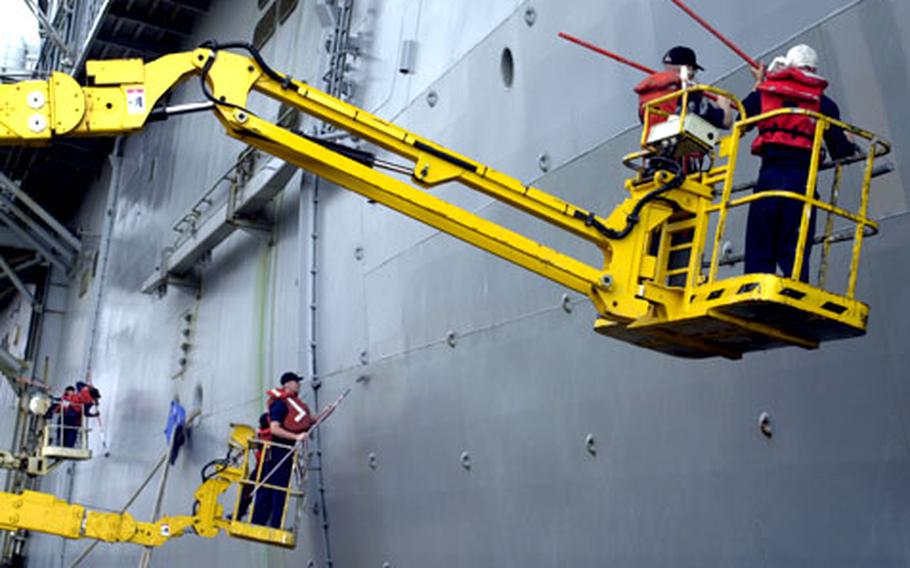 Sailors on cranes paint the side of the USS Iwo Jima on Tuesday at Rota. (Scott Schonauer / S&S) 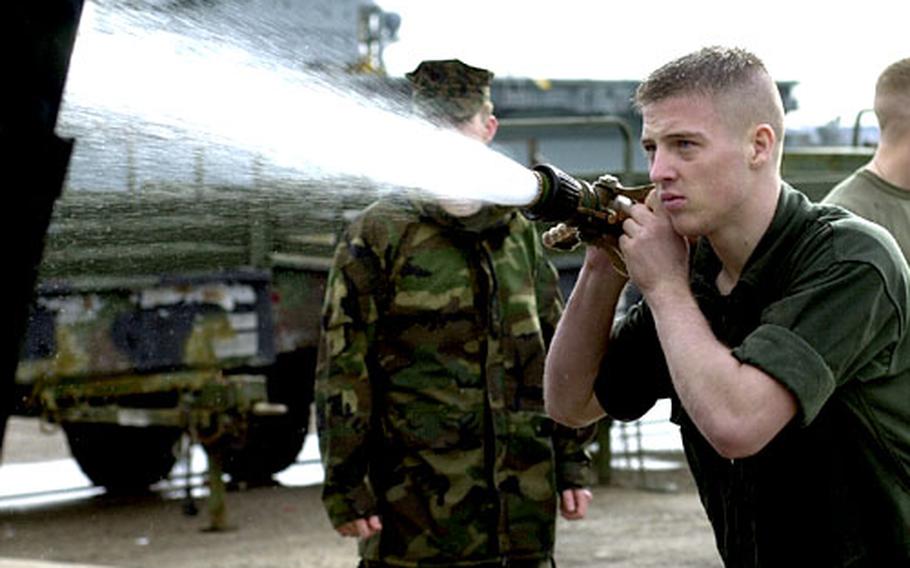 Marine Cpl. William Hoornstra fires a high-powered hose at a truck Tuesday at Rota. About 5,000 sailors and Marines with the Iwo Jima Amphibious Ready Group are in Spain to wash down equipment, paint their ships and get some rest and relaxation before heading home after an 8-month deployment. (Scott Schonauer / S&S) 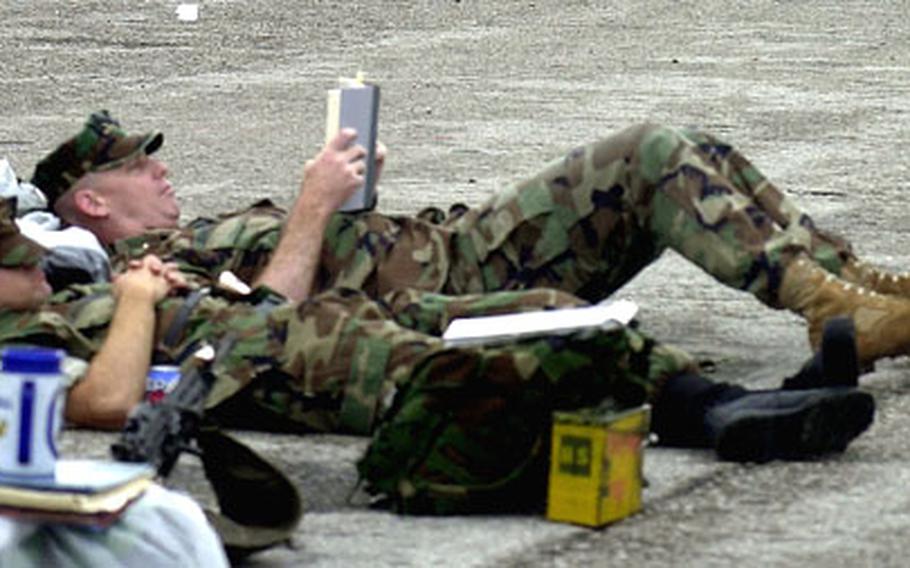 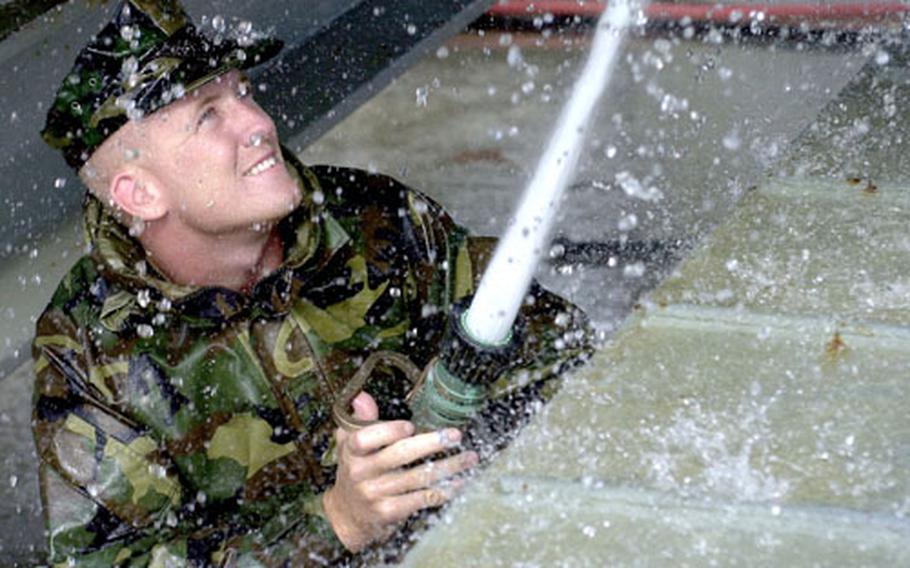 A U.S. Marine with the 26th Marine Expeditionary Unit washes the undercarriage of a vehicle on Tuesday at Rota. (Scott Schonauer / S&S)

NAVAL STATION ROTA, Spain &#8212; During the opening days of the war in Iraq, Marines from the 26th Marine Expeditionary Unit prepared for their mission so far from the battlefield they were in a different time zone.

Instead of taking helicopters from ships hugging the coastline, they boarded C-130 cargo planes from a Mediterranean port.

Within hours, they would complete the 1,000-mile journey from Souda Bay, Crete, to northern Iraq &#8212; roughly the distance from Boston to Chicago.

When the first Marine&#8217;s boot touched the ground, he made history. Marines from an amphibious ship had never traveled farther to reach the front lines.

It was one of the enduring memories of the Iwo Jima Amphibious Ready Group&#8217;s deployment. After fighting in the war in Iraq and wrapping up a peacekeeping operation off the coast of Liberia, the roughly 5,000 sailors and Marines with the three-ship task force are going home.

They are in Rota to wash down their vehicles, repair equipment, paint the ships and get some rest before they make the return trip across the Atlantic Ocean.

When they pull into their home ports in Virginia, the group will have completed an eight-month deployment that took them from the Persian Gulf to the coast of West Africa. It was the first deployment for the Iwo Jima, the Navy&#8217;s newest troop carrier.

After picking up about 1,400 Marines from the 26th Expeditionary Unit in North Carolina, the ships headed toward the Persian Gulf. They were part of the last group of ships to leave for the Middle East before the war.

But they would not operate in the Arabian Gulf during the onset of Operation Iraqi Freedom. A change in battle plans had them stop in Souda Bay to drop off equipment and Marines.

Capt. David Taylor, commander of Amphibious Squadron Six, said the crew was given 24 hours to offload the three ships and Marines in Crete. Once they dropped off the troops and gear, the ships steamed toward the eastern edge of the Mediterranean to launch the helicopters.

The day the helicopters took off from the deck inspired many sailors and Marines. Taylor said he still gets goose bumps talking about it.

Before the mission, the Marines had shattered distance records in Afghanistan. Frick said the Marines will probably travel as long or longer distances in future conflicts. Launching from a port in the Mediterranean showed that the Navy can project its combat power from afar.

The group eventually traveled to the Persian Gulf but later returned to the Mediterranean. In August, the troops were ordered to head to the coast of Liberia to help support the international peacekeeping force. They stayed three miles offshore for about two months.

The three ships also traveled to the Horn of Africa to support the war on terrorism and participated in an exercise in Albania. So far, the ship has traveled more than 35,000 miles.