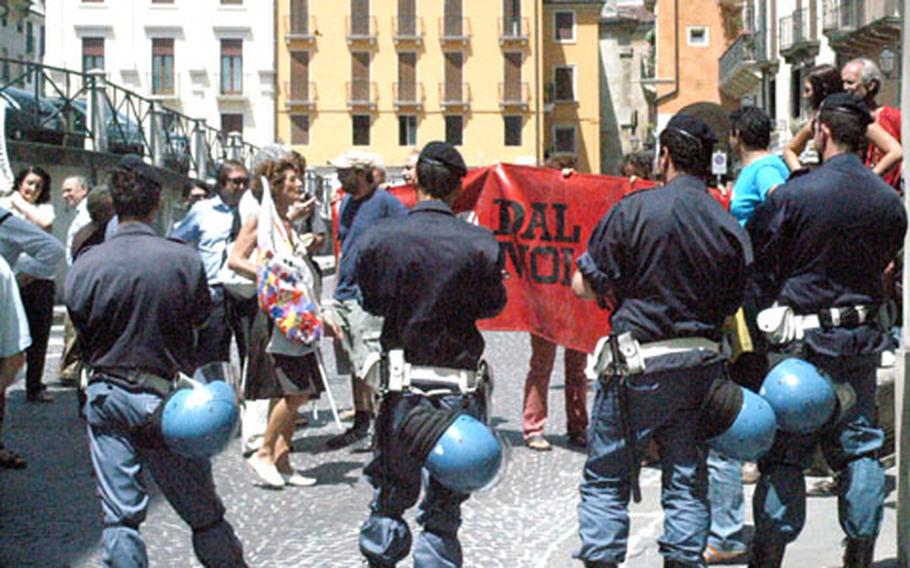 Protesters opposed to the Dal Molin airfield project in Vicenza, Italy, gather outside the provincial headquarters Wednesday as officials talked about the project with the media. (Kent Harris / S&S)

Protesters opposed to the Dal Molin airfield project in Vicenza, Italy, gather outside the provincial headquarters Wednesday as officials talked about the project with the media. (Kent Harris / S&S) 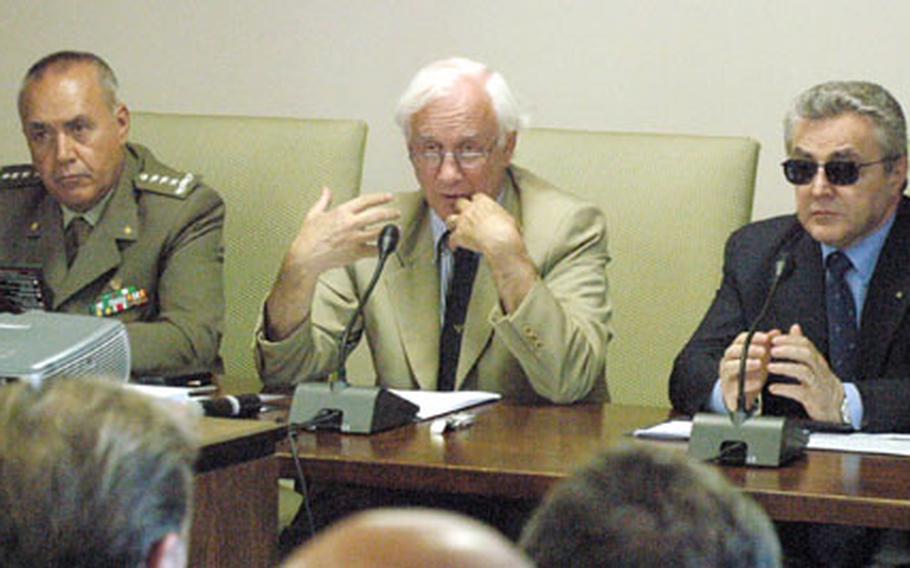 Paolo Costa, Italy’s point man on the Dal Molin airfield expansion project, talks to the media Wednesday during a press conference in Vicenza. Flanking him are Italy Army Gen. Ivan Resce, left, in charge of the country’s military construction projects, and Piero Mattei, prefect of the province of Vicenza. (Kent Harris / S&S)

VICENZA, Italy &#8212; The man appointed by the Italian government to oversee U.S. plans to use part of the Dal Molin airfield said Wednesday that contractors across the country can start submitting bids for the project.

Speaking at a news conference for the first time since the Italian government appointed him, Paolo Costa said there are a lot of details to be worked out. But he said the government has already approved the project&#8217;s concept and indicated there won&#8217;t be any going back.

It wasn&#8217;t good news for the dozens of protesters gathered outside the provincial headquarters building where the briefing was taking place. Opponents of the project cite a number of objections, including environmental concerns, opposition to U.S. policies around the globe and potential problems created by an additional 1,800 or so American troops.

Costa said he had talked to some of the opponents and was willing to talk to others. He also repeatedly stressed the Italian government&#8217;s plans to be &#8220;transparent&#8221; about all details of the project &#8212; addressing another common complaint.

He said a Web site would soon be set up for the local population to follow the progress of the project.

The plans are in the most basic conceptual stage. The U.S. plans to use the airfield for buildings and housing for a substantial part of the 173rd Airborne Brigade. Two of the six battalions are based in Vicenza. The other four would move from Germany when the project is completed.

Specific plans will be generated once a general contractor is selected, Costa said. He said he hoped one would be selected by the end of the year.

He also said the project, estimated to cost more than $464 million, would be completed by 2011.

Davis, who attended the news conference, echoed those hopes. He said an environmental study has already been started. He said the U.S. military would abide by recommendations it found and adjust plans appropriately.

The project could be subject to another environmental study if the country&#8217;s legislature decides to toughen standards for military projects in Italy. Such projects are currently exempt from those studies, but the legislature is looking at changing that. Davis said he didn&#8217;t believe either study would prevent the project from being built.