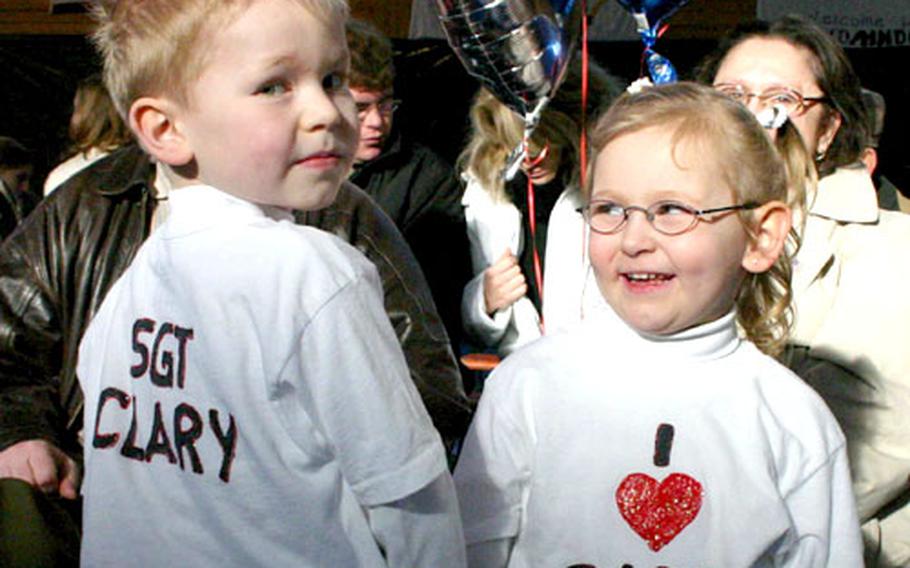 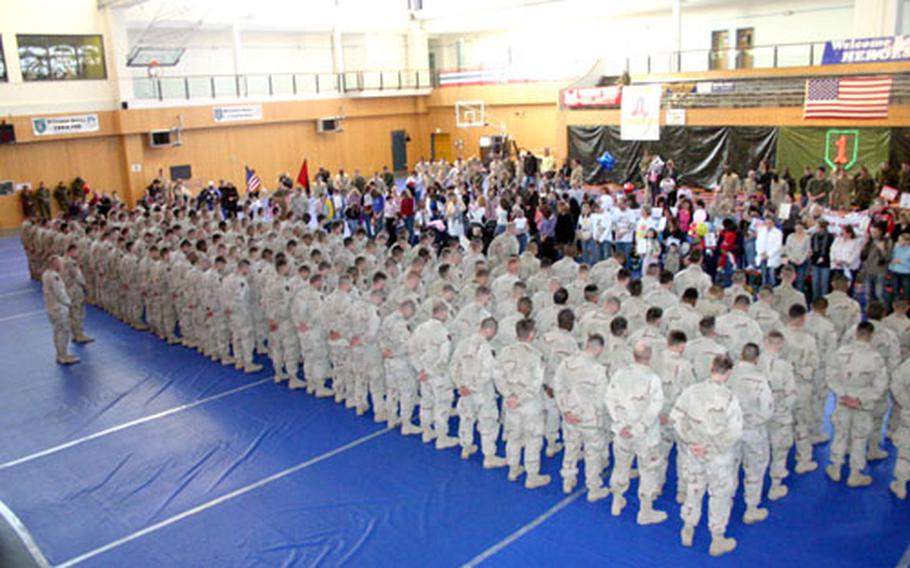 Soldiers and family members bow their heads in prayer shortly before being dismissed to greet each other during the welcome home ceremony Monday at Schweinfurt. (Kristen Chandler Toth / Courtesy of U.S. Army)

Hundreds of family members toting signs and balloons trickled into the gym at Schweinfurt&#8217;s Conn Barracks to welcome home their troops at two ceremonies Monday afternoon and evening. Two hundred fifty-eight of the soldiers came from the 1st Battalion, 18th Infantry Regiment, and 40 represented the 1st Battalion, 77th Armor Regiment.

It was a happy end to a stressful year.

The 1-18 Infantry patrolled a relatively calm sector of the Sunni Triangle, a restive region north and west of Baghdad that includes many pockets of rebellion.

That meant soldiers spent more time on constructive efforts such as boosting local governments in Tikrit and nearby villages such as Owja and Wynot while building new schools and health clinics. The area saw voter turnouts of 80 percent to 90 percent during the Jan. 31 elections, said 1st Sgt. John Hatley, 36, of Groesbeck, Texas, the senior noncommissioned officer to return Monday.

But it still meant countering almost daily attacks by insurgents using roadside bombs and rocket-propelled grenades. Six 1-18 Infantry soldiers died in Iraq, four of them last March in the unit&#8217;s first three weeks patrolling Tikrit. One of the dead was a popular company commander, Capt. John F. &#8220;Hans&#8221; Kurth, who died with his driver, Spc. Jason Ford, in a bomb attack.

Sgt. 1st Class Rachelle Gattenby of the W&#252;rzburg-based 67th Combat Support Hospital waited with her 5-year-old daughter, Gillian, for her husband, Sgt. 1st Class Brian Gattenby, a 1-77 Armor soldier who was attached to the 1-18 Infantry.

She, too, just returned from a year in Iraq, during which Gillian stayed with her grandparents in the United States. Being deployed near her husband made little difference. Aside from their two weeks of rest-and-recuperation leave, they saw each other only three times.

In spite of the hardships, several soldiers said they had no regrets about their mission in Iraq.

W&#252;RZBURG, Germany &#8212; With the historic Iraq elections complete, the 1st Infantry Division troops who stayed to make them safer are now coming home by the planeload.

At least 10 other C-17s loaded with returning Big Red One troops from 15 units have arrived since Saturday, said Spc. Rebecca Sharpton, a 1st ID spokeswoman. Thirteen more are expected in the next few days.

The flights this time are quite different from those last year, when the first rotation of troops returned from Iraq. In 2004, most battalion-size units returned home in two or three large groups after convoying from Iraq to the port in Kuwait.

This year, though, most Big Red One soldiers are flying home on Air Force C-17s directly from the airfield at Tikrit or from Balad as seats are available. That eliminates a long, dangerous convoy ride to Kuwait, and a dull wait of two to three weeks in one of that country&#8217;s desert camps.