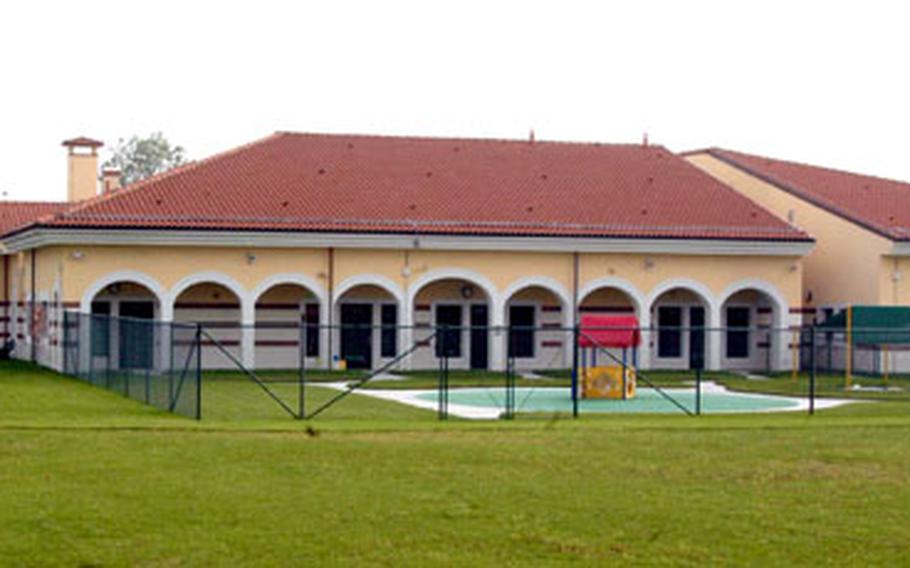 Parents have had to wait a little longer than they hoped to, but the new Child Development Center at Aviano Air Base, Italy, is finally opening. (Kent Harris / S&S)

Parents have had to wait a little longer than they hoped to, but the new Child Development Center at Aviano Air Base, Italy, is finally opening. (Kent Harris / S&S) 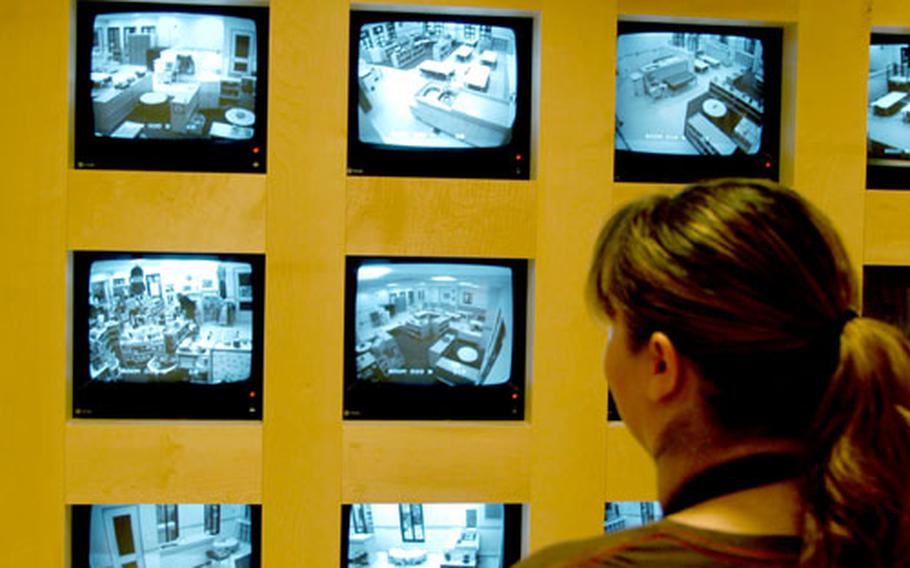 Bambi Shelby checks in on her son, Anthony, on the television monitors located in the reception area of the new Child Development Center at Aviano. (Kent Harris / S&S) Jan Mead, one of the instructors of the part-day enrichment program at the new Child Development Center at Aviano, shows Riley Williams a new toy at the center on Tuesday. (Kent Harris / S&S) 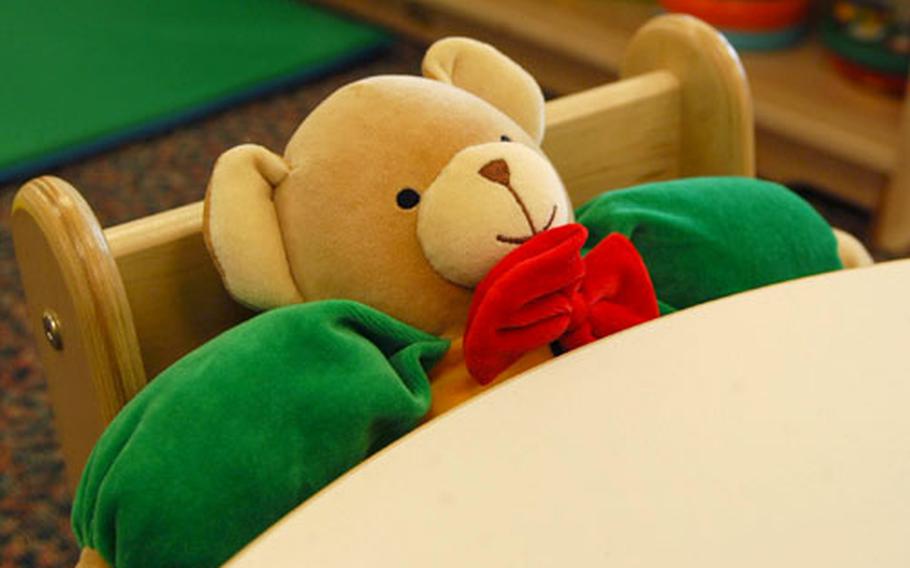 A toddler will soon be sitting in the space currently occupied by this teddy bear at the new Child Development Center at Aviano. (Kent Harris / S&S)

No, it&#8217;s not a new trendy nightclub. The newest Child Development Center in Europe will make its debut Monday at Aviano. It is the latest attempt by military leaders to address a need that&#8217;s important to parents across Europe: a safe environment for the kids while Mom and/or Dad is at work.

Aviano&#8217;s new center eliminates the waiting list for parents needing child care, the need for which is a hot-button issue for many bases throughout Europe.

Ellen Sheppard, Regional Child and Youth Evaluation Team chief for the Installation Management Agency-Europe, said child care is a top priority for thousands of servicemembers with children too young to attend school &#8212; especially in an era when long deployments are commonplace.

Aviano&#8217;s facility took about four years to complete. Parents visiting for the first time will find state-of-the art facilities: 10 classrooms filled with fixtures, furniture and toys that most adults would classify simply as &#8220;tiny&#8221;; three playgrounds; a kitchen that might make some TV chefs envious.

In Aviano, parents have relied on Italian child-care providers for years. But Christi Skinner, director of the new center, said it will replace an operation on Area 2 that&#8217;s able to accommodate only 70 slots.

Child-care centers around Europe care for thousands of infants, toddlers and preschoolers during a typical week. The Navy, which has the fewest servicemembers in Europe, has a capacity of 1,075 children.

But there are not enough slots. There are hundreds of parents in Army, Air Force and Navy communities with children waiting to get in.

&#8220;I don&#8217;t know that they will ever meet 100 percent of the need,&#8221; said Chris Robus, Morale, Welfare and Recreation program director for Commander Naval Forces Europe.

While there are waiting lists to get into child development centers at bases across Europe, providers say the numbers can be a bit misleading.

Sometimes care is available, but not the type of care parents are seeking. Deployments play a major role. If one parent is sent downrange for a year, the spouse might choose to take the family back to the States. And though summer is traditionally a heavy season for permanent change of station moves, servicemembers come and go year-round.

So officials say numbers on waiting lists change weekly if not daily.

That said, most bases have at least small lists of children waiting to get a particular service the base can&#8217;t currently provide.

Robus said the wait can be as long as three months at some Navy bases in Europe, though it&#8217;s usually much shorter. There are about 70 people on waiting lists at Navy bases around Europe.

U.S. Army Europe, with a much higher troop population, has many more children on lists. Sheppard said exact figures aren&#8217;t available now, although there were some 750 children on the list two months ago.

In the Air Force, Incirlik Air Base in Turkey is a rarity. Director Bonita Jones said her center cares for 36 children. There&#8217;s no waiting list.

That&#8217;s not the case in the United Kingdom, with RAF Lakenheath (199) and RAF Mildenhall (93) each reporting large lists. They care for 500 children, and that number will grow by about 100 with an expansion planned for Mildenhall next year. RAF Alconbury has a small waiting list (six) and a smaller capacity (50).

The largest concentration of Americans in Europe is in the Kaiserslautern/Ramstein area. Waiting lists for day care there top 100, including 17 mothers who haven&#8217;t given birth yet.

Then there are the stories that plague providers about people not signing up for lists because they believe their children will never get in.

Stars and Stripes reporters Ben Murray and Scott Schonauer contributed to this report.

It often takes years to receive approval, get funding, plan and build a child-care center.

&#8220;You don&#8217;t just erect a facility overnight,&#8221; said Ellen Sheppard, Regional Child and Youth Evaluation Team chief for the Army in Europe, adding that child-care centers have a variety of special features not found in most buildings around base.

Chris Robus, Morale, Welfare and Recreation program director for Commander Naval Forces Europe, said the Military Child Care Act in 1989 dramatically changed the way centers do business. Many facilities at the time were housed in buildings originally designed for other purposes.

But even time hasn&#8217;t allowed commanders to construct all the facilities they would need if every parent wanted their child in a center. So while new centers have appeared in places such as Sigonella, Italy, and will soon appear in Vicenza, Italy, and Wiesbaden, Germany, the services are looking at alternatives.

One, touted by U.S. Army Europe commander Gen. B.B. Bell in Armed Forces Network spots, involves child-care centers established off base in the homes of servicemembers.

Sheppard said such alternatives also present parents with a choice.