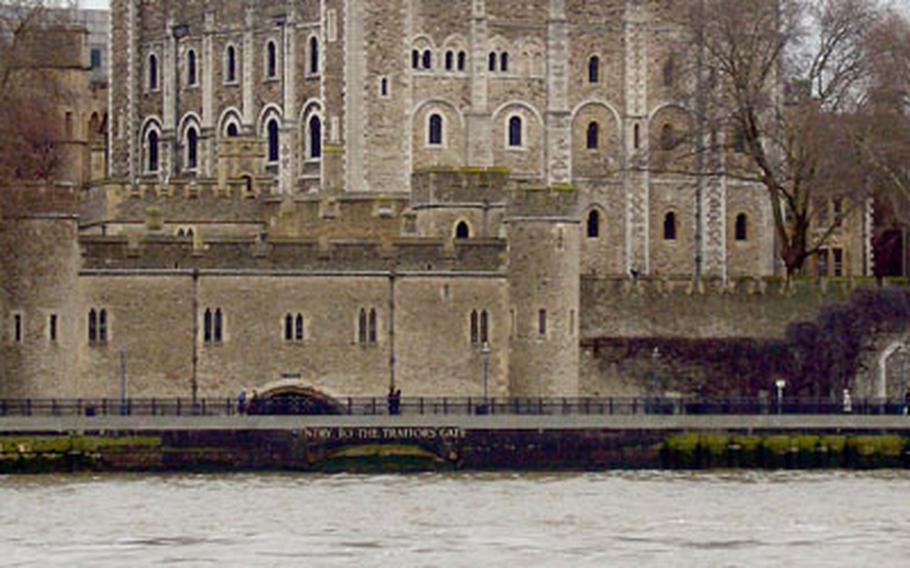 The Tower of London&#39;s White Tower is its most dominant building and can be seen here across the River Thames. The Tower of London offers a glimpse into British royalty through its priceless Crown Jewels, powerful armories and as the site of torture practices. (Sean Kimmons / S&S)

The Tower of London&#39;s White Tower is its most dominant building and can be seen here across the River Thames. The Tower of London offers a glimpse into British royalty through its priceless Crown Jewels, powerful armories and as the site of torture practices. (Sean Kimmons / S&S) 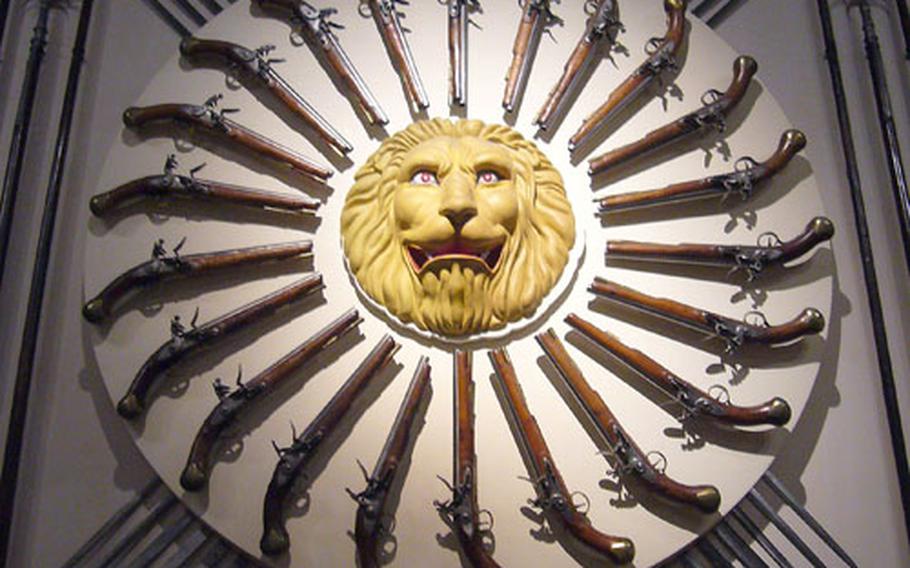 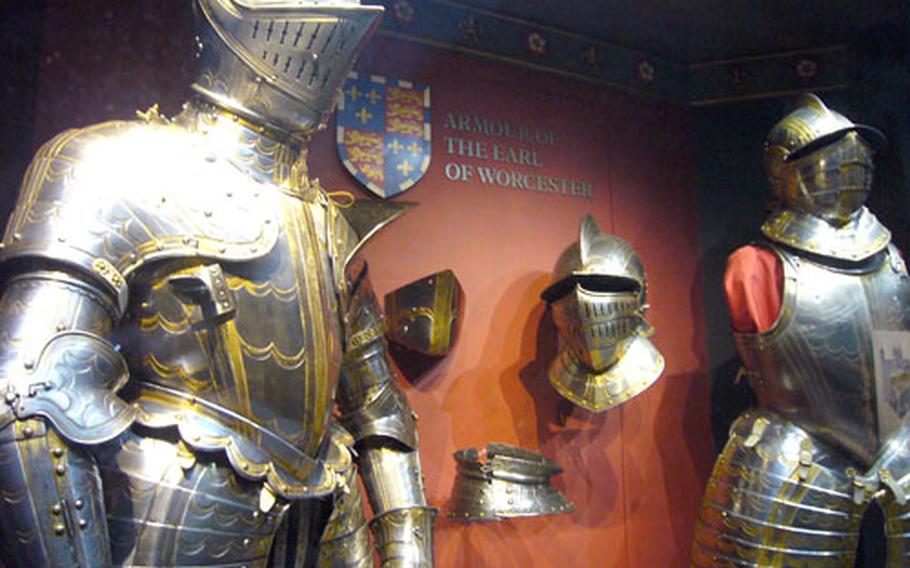 Body armor from The Earl of Worcester, as well as other royalty, is on display inside The Tower of London&#39;s White Tower. (Sean Kimmons / S&S) 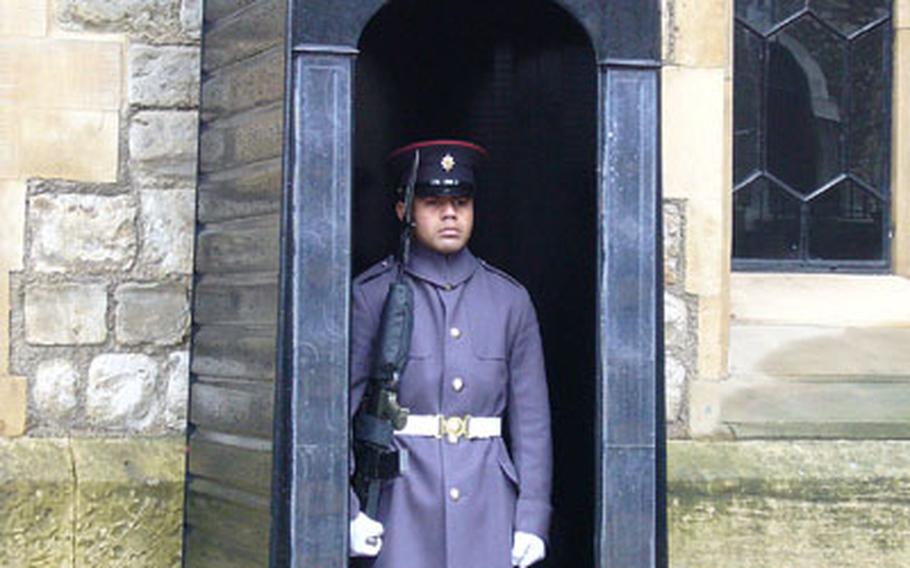 A guard stands outside a building where the Crown Jewels are featured. Even though the sparkling crowns and orbs of the royal collection are worth a photo, no photography is allowed inside the building. (Sean Kimmons / S&S)

LONDON &#8212; The 900-year-old Tower of London is considered one of the world&#8217;s most historic sites and a must-see in many travel brochures. But is it worth a 15-pound adult admission?

Situated along the River Thames in the shadow of Tower Bridge, the Tower of London gives visitors a glimpse into British royalty through its priceless Crown Jewels, powerful armories and ugly torture devices. The Tower&#8217;s history, along with these collections, helped make it a UNESCO World Heritage site in 1988, one of 830 throughout the world.

The Crown Jewels, most of them centuries old, are the highlight of the Tower and perhaps alone worth the admission price. Hordes of visitors often wait in line to see the sparkling royal crowns and orbs covered in diamonds and gems. In a secured vault with the jewels are religious dishes made out of gold-plated silver that could also land a good price at the local pawnshop.

To combat long lines, conveyor belts of the type often found at airports move visitors past the most prestigious items in the collection. In the winter months, visitors may be lucky to escape the crowds and take their time to admire the stunning items fit only for a king or queen.

Those who are into weapons rather than glittery jewels should check out the armories of the White Tower, a 90-foot-high building that dates back to William the Conqueror in the 11th century.

Visitors can stroll past elaborate displays of pistols and rifles, view body armor of past kings in the Line of Kings exhibit, walk past giant cannons and see a beheading block and ax used to kill a few unpopular dignitaries.

To dip further into the morbid reality of the Tower of London&#8217;s past, go to the Wakefield Tower, known for its use of torture to interrogate state prisoners in the 16th and 17th centuries. There, torture devices such as the Scavenger&#8217;s Daughter &#8212; a metal rack that compressed the body &#8212; and manacles are on display.

Prisoners&#8217; stories helped paint an image of the Tower of London as being a place of torture and imprisonment, according to a sign at the exhibit.

Another morbid attraction is the Scaffold Site, where three queens of England were executed. The execution site is marked by a memorial, which features a clear glass pillow with an indentation that looks as if a head was resting on it.

Nearby, the Beauchamp Tower gives visitors a look into the boredom faced by many prisoners locked up there. Many walls bear etchings from prisoners doing time in the 16th century.

Ravens seen throughout the Tower add to the haunting aura, but that&#8217;s not their purpose. According to legend, Charles II warned that if the birds were to leave, the monarchy would fall, the tower&#8217;s brochure states. Today, a small contingent of ravens resides in the courtyard.

Yeoman Warder guides, referred to as Beefeaters and dressed in distinctive black and red uniforms, can shed some light on the Tower&#8217;s history during one of their 60-minute tours. Video displays throughout the Tower also share stories of its past.

With all of its impressive trinkets and revealing history, the Tower of London is worth a trip. One thing that may leave visitors disappointed, though, is the lack of props to go with the exhibits, especially the more morbid ones.

The nearest Underground station is Tower Hill along the District and Circle lines.

For more information on exhibits and opening times, click here.