London: National Gallery is home to many of the world’s masterpieces 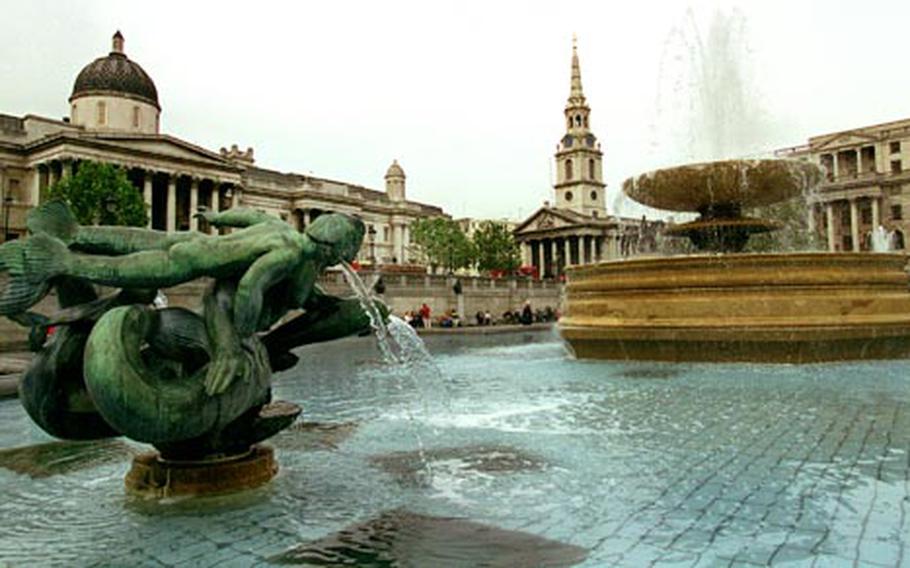 File photo: London, UK, May 98; These are the fountains of Trafalgar Square, with the National Gallery at left, St. Martin-in-the-Fields at center and the South Africa House at right. (Michael Abrams / S&S)

LONDON &mdash; The year was 1527 when Holy Roman Emperor Charles V led a sack of Rome that sought to restore the balance of power in Europe.

Marauding troops came upon a Roman art studio where a 24-year-old artist by the name of Parmigianino was in the midst of creating a spectacular painting, &ldquo;The Madonna and the Child with Saints John the Baptist and Jerome.&rdquo;

So impressed were the pillaging mercenaries that they allowed the young painter to continue unmolested with his work, which portrays a naked toddler Jesus alongside the Madonna as Saint Jerome sleeps nearby and a rugged John the Baptist holds a bowl and revels in the glory of his Lord.

Nearly 500 years later, visitors to Britain&rsquo;s art-strewn capital can thank those benevolent raiders for their wisdom as they take in the majesty of his work in the stunning Sainsbury Wing of the National Gallery.

Founded in 1824 when the House of Commons paid a British banker 57,000 pounds for 38 paintings, the National Gallery has grown to its current status as one of the world&rsquo;s premier art galleries, according to the museum&rsquo;s Web site, www.nationalgallery.org.uk.

Located in the spiritual heart of London in the shadow of Lord Nelson&rsquo;s Column in Trafalgar Square, the National Gallery is home to masterpieces that stretch from the Italian Renaissance movement through the Dutch impressionists period.

It&rsquo;s the perfect place to while away a rainy Sunday afternoon or take visitors to boast that you do, in fact, reside not far from one of the world&rsquo;s cultural capitals.

During a stroll through the opulent wings, a few of the pieces that most impressed included Rembrandt&rsquo;s 1635 &ldquo;The Lamentation over the Dead Christ,&rdquo; in which, unlike its Renaissance predecessors, Christ does not glow nor is he adored, but is instead portrayed dead with forlorn admirers hopelessly gathered about.

Then there&rsquo;s Joseph Wright&rsquo;s 1768 &ldquo;An Experiment with a Bird in an Air Pump,&rdquo; in which man&rsquo;s fascination with the growing knowledge of the sciences is captured in all its awe and, for the younger participants, horror.

Not to miss is Paul Delaroche&rsquo;s 1833 &ldquo;The Execution of Lady Jane Grey,&rdquo; which captures the moments before the brutal beheading of the 17-year-old royal who was killed after ruling England for only nine days. The executioner&rsquo;s utter lack of emotion is chilling.

The precision in detail exacted in Dirck van Delen&rsquo;s 1634 &ldquo;An Architectural Fantasy&rdquo; boggles the mind. The scene of stately nobles set against a backdrop of Roman and neo-classical buildings is nothing short of spectacular. You can nearly hear the fountain&rsquo;s soft splash.

While the crowds gather around Vincent van Gogh&rsquo;s now-ubiquitous 1888 &ldquo;Sunflowers&rdquo; &mdash; there are scores of other works by artists such as Velazquez, Michelangelo, Raphael and Monet &mdash; it most likely will be a piece by an artist whose name rests in obscurity but whose work stirs the soul that leaves a visitor most impressed.

Location: Trafalgar Square, London WC2N 5DN. Charing Cross is the nearest Underground station.Admission: Free, but a donation is appreciated.Clientele: Anyone who appreciates the height of man&rsquo;s creative spirit.Hours: Open 10 a.m. to 6 p.m. every day but Wednesday, when it&rsquo;s open until 9 p.m.