London: City doesn't have to break you 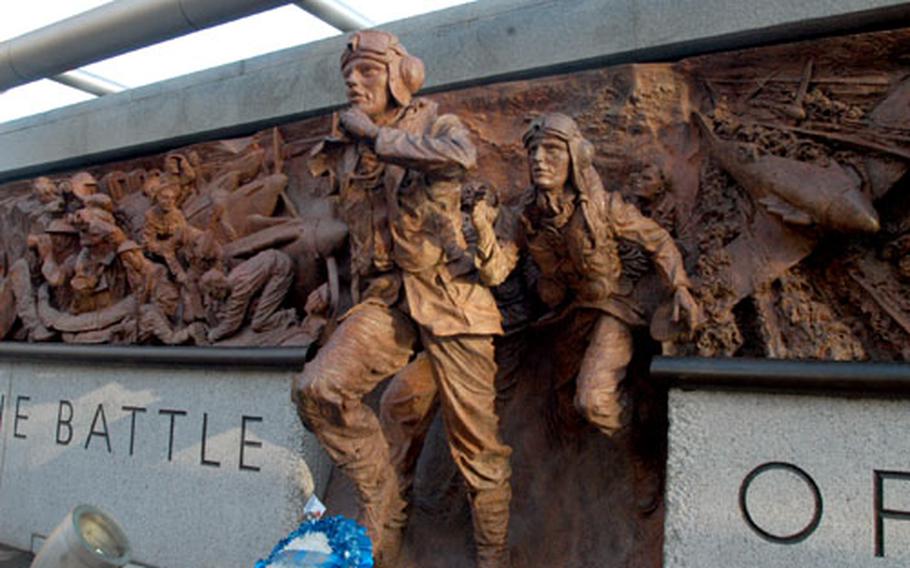 Life-sized models of British soldiers are part of The Battle of Britain Monument in London. Set along the bank of the River Thames, the monument pays homage to those who died in the World War II battle. For any military enthusiast, it’s a must-see. (Bryan Mitchell / S&S)

LONDON &mdash; When in Rome, do as the Romans do. When in London, sleep in. At least if you want to save a few pounds.

After 9:30 a.m. the prices for an all-day pass on the Underground &mdash; tube to the British, subway to Americans &mdash; drop considerably.

At that time, an all-day pass to visit anywhere within Zones 1 through 3 &mdash; nearly everything tourists on a budget want to see &mdash; drops from 14 pounds ($25) to just over 7 pounds, or about $12.50. In one of the most expensive cities on Earth, every pence counts, especially for the American traveler already hemorrhaging from the exchange rate.

The following tips could help if a visit to London is in your plans, as they pay special attention to fiscal responsibility so your family can enjoy one of Europe&rsquo;s great cities without activating your credit card&rsquo;s fraud alert system.

LodgingThe most important aspect to remember when traveling to a grand city like London is that there always will be an open room somewhere and, as with so much in life, timing is everything.

Sunday nights traditionally are the best to travel and get reasonably priced lodging.

After calling ahead and negotiating with the reservation attendant, we secured a 65-pound &mdash; roughly $117 &mdash; per-night rate. Rooms at the well-appointed Ramada normally run for more than 100 pounds, but the attendant was happy to fill our request after acknowledging the hotel had an abundance of open rooms on that night.

Another suggestion is to ask for breakfast to be included in the room rate. Failure to do so will cost you an additional 10 pounds.

Royal viewsEvery American revels in the Fourth of July barbecue and obligatory fireworks when we celebrate our emancipation from Great Britain and taxation without representation. But there&rsquo;s something about the English royal family &mdash; the pageantry, the tradition, the tabloid fodder &mdash; that still attracts Americans.

Nothing is greater evidence of that than witnessing the Changing of the Guard at Buckingham Palace. The marching, the music, the big furry hats &mdash; it&rsquo;s enough to excite kids of all ages.

It&rsquo;s free and the event occurs each morning at 11:30, but to be sure you don&rsquo;t miss it, call the palace information line at 020 7839 1377 or check out www.visitlondon.com. Arrive early if you hope to snap a worthwhile photo as the hordes of tourists snag every available space.

After taking in the Changing of the Guard, walk toward Westminster Abbey through historic St. James Park for a splendid view of the city set against a pond flush with swans, geese and more pigeons than one would find along a midway at an American county fair.

A touch of cultureThe Brass Rubbing Center may not sound like the place to absorb some European atmosphere, but it will surprise you.

In the so-called crypt of the St. Martin-in-the-Fields Church, the church offers a brass rubbing center where children can capture the image of a knight in armor or a beast that surely will remind you of your eighth-grade reading of &ldquo;Beowulf.&rdquo;

Free lunchtime performances of classical music are available every Monday, Tuesday and Friday. As always, trust yourself, and call ahead for more details at 020 7930 9306.

History&rsquo;s keepersOn Sept. 18, 2005, a contingent of English royals as well as former and current British military leaders were on hand for the unveiling of The Battle of Britain Monument. For any military enthusiast, it&rsquo;s a must-see.

Constructed in the same fashion as the Vietnam War Memorial in Washington, D.C., and set along the banks of the River Thames, the monument has the names of all the people killed in the historic battle, including nine Americans. Stop and pay homage to the brave souls who helped save the free world.