London: Chill out at the Absolut Icebar among the frozen drinks and decor 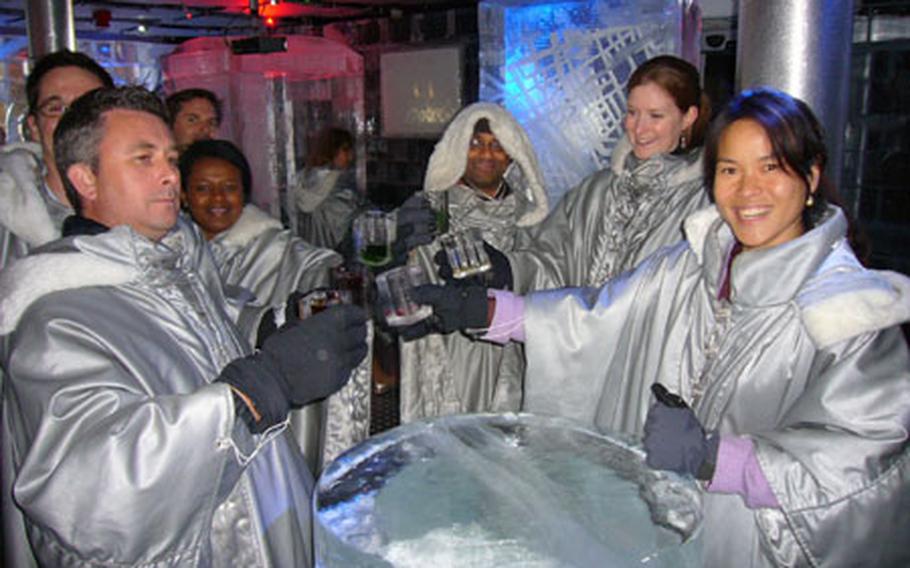 A group of Londoners raise their ice glasses inside the freezing Icebar in London. (Sean Kimmons / S&S)

A group of Londoners raise their ice glasses inside the freezing Icebar in London. (Sean Kimmons / S&S) 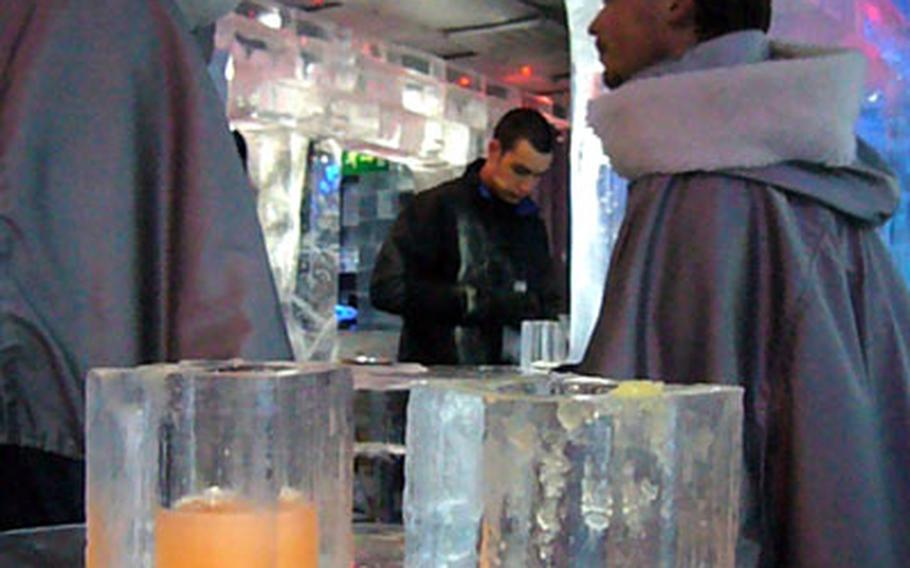 Two flavored vodka drinks in glasses made completely out of ice wait to be finished off by patrons inside the Icebar in London. (Sean Kimmons / S&S) 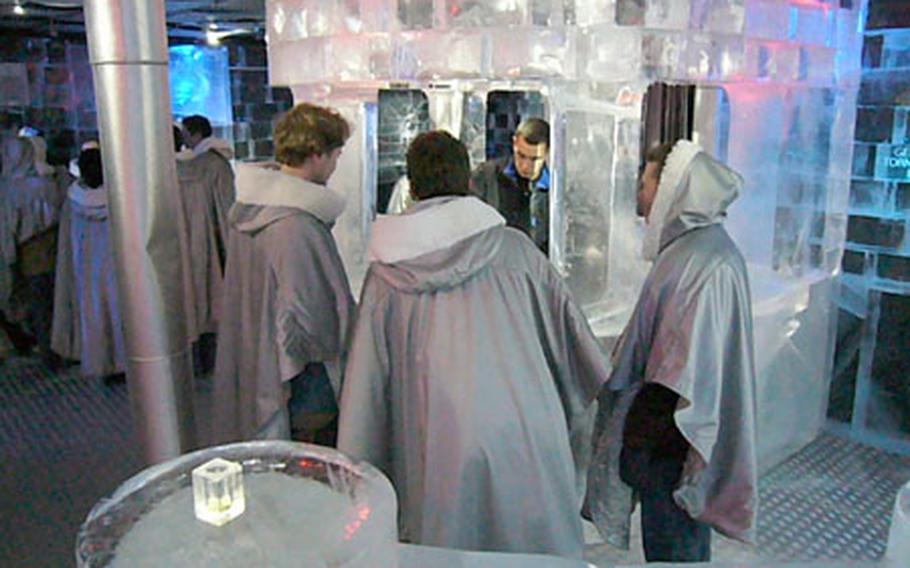 Inside the Ice Bar in London. (Sean Kimmons / S&S) 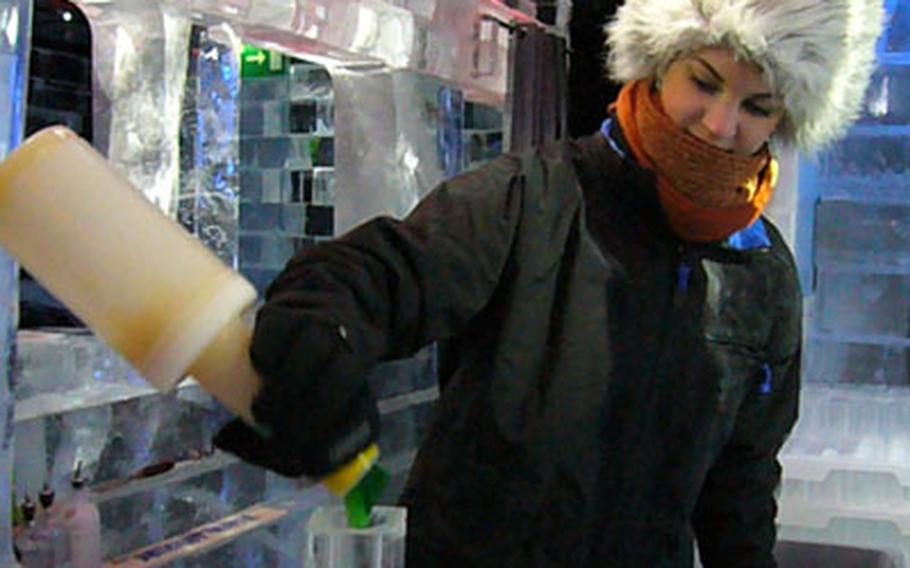 Bartender Judit Drazcowski prepares a flavored vodka drink for a patron inside the Icebar in London. (Sean Kimmons / S&S)

Normally, it&rsquo;s a sign of trouble when you&rsquo;ve been standing in a bar for less than 30 minutes and already you can&rsquo;t feel your feet. In this bar, however, such physical effects are more likely to be associated with mild hypothermia than a spiked gimlet, because, to be frank, it&rsquo;s damn cold in the Absolut Icebar.

The low temperature, which hovers between -5 and -8 degrees Celsius (18-23 F), are due to the fact that everything in the place, from the walls and tables to the bar and the chairs &mdash; is made of ice. Clear, chiseled, absolutely freezing blocks of ice.

In a town full of trendy clubs and hip little basement bars, people in London are often on the lookout for unique places to have a drink or a meal, and the Icebar has managed to set itself apart.

Set in what is essentially an oversized freezer, it is encased in thousands of pounds of ice purportedly from the Torne River in Sweden and carved into stools, tables, sculptures and, in the latest design, an oversized phone box.

The experience starts in the cloak room, where for 12 to 15 pounds (depending on the time of day), you are handed a space-age-looking, hooded silver poncho with a pair of gloves attached and pointed toward a frosted automatic doorway.

The effect of walking through the door is immediate and striking, especially on a warm day. The drastic drop in temperature hits you in the face and tinges your breath as the cold comes off of every surface in the room (except the floor and ceiling, which are steel), and it looks as though you&rsquo;ve been transported to the lounge of a high-class igloo. Behind a crystal-clear bar, a woman in a fur hat, snow pants and two scarves is waiting to serve neon-colored drinks, while a video recording of a log fire flickers on the wall.

Colored lights set behind some of the ice blocks give the place a modern feel, enhanced by the presence of a couple dozen people in shiny silver cloaks. The toilets, thankfully, are in the (heated) basement, adjacent to the Icebar&rsquo;s sister restaurant, belowzero.

To keep things simple, the bar offers only a menu of Absolut mixed drinks with an interesting array of names and flavors running from coconut to cactus. And there&rsquo;s no need to ask for anything on the rocks, because the &ldquo;glass&rdquo; the drinks are served in is made of ice, too, an innovation that has its pros and cons. Your vodka sour will be really, really cold, sure, but it&rsquo;s hard to hold it in an ungloved hand for more than 15 seconds and it is, for function&rsquo;s sake, square. For some reason, it manages not to stick to your lip at each sip, but it does, however tend to melt if you drink slowly.

As much as the Absolut Icebar may sound like a London tourist trap, most patrons on a recent weeknight were locals out for an after-work cocktail, who gave the place high marks for the novelty factor.

Another patron had similar high opinions of the bar and the cocktails, but had one valid complaint &mdash; not enough seating. Turvey and her friend, in fact, had the only two seats in the bar, kept small to reduce the amount of work to rebuild it twice a year, and constantly frozen the rest of the time.

The entire bar is hauled out and resculpted every six months, a manager said, when a sculptor comes in to rebuild and redecorate the place. The place is so small, in fact, that only about 60 people can go in at a time, and patrons can stay for only 40 minutes before they are moved on. Reservations are strongly recommended, the hostess said.