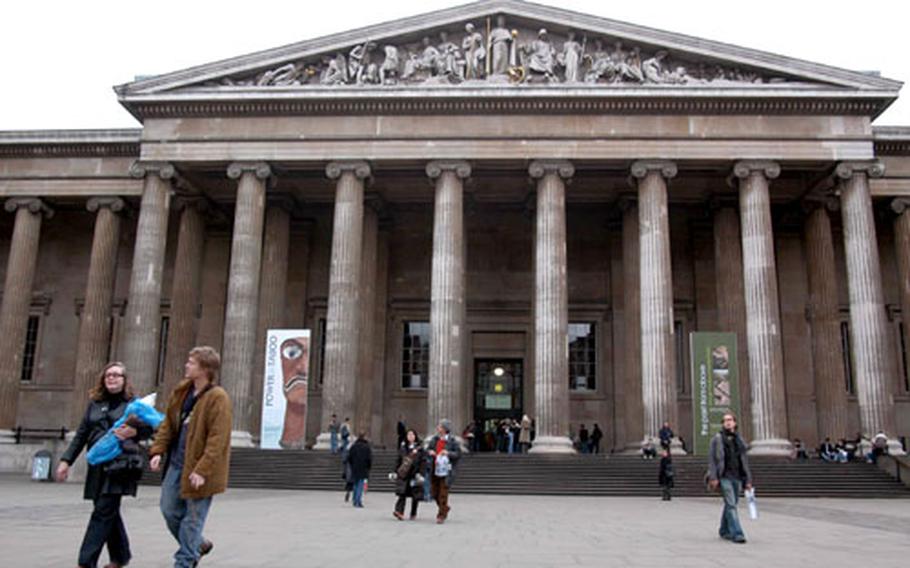 The imposing facade of the British Museum in London, home to extensive displays from ancient cultures around the world. (Ben Murray / S&S)

The imposing facade of the British Museum in London, home to extensive displays from ancient cultures around the world. (Ben Murray / S&S) 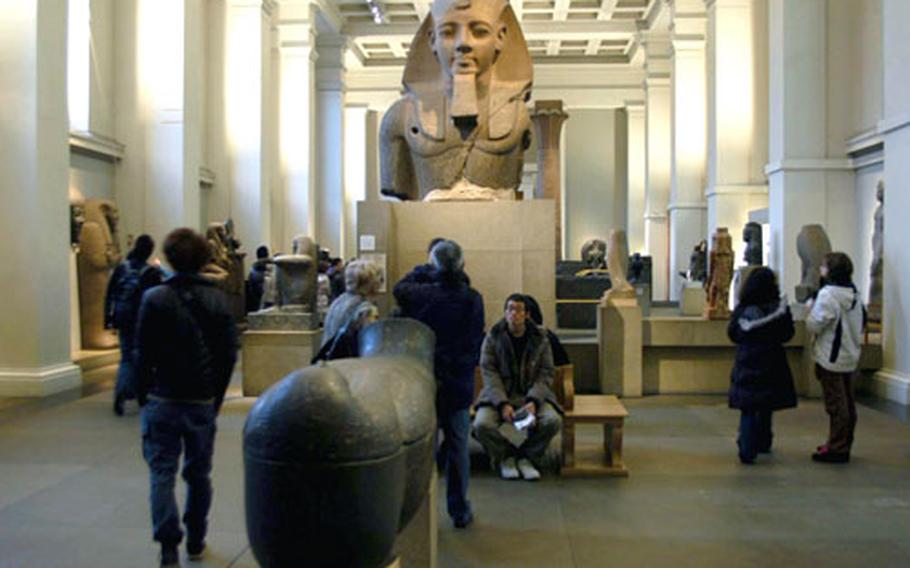 A colossal statue of a pharoah looks over visitors to the British Museum&#39;s Egyptian wing. (Ben Murray / S&S) 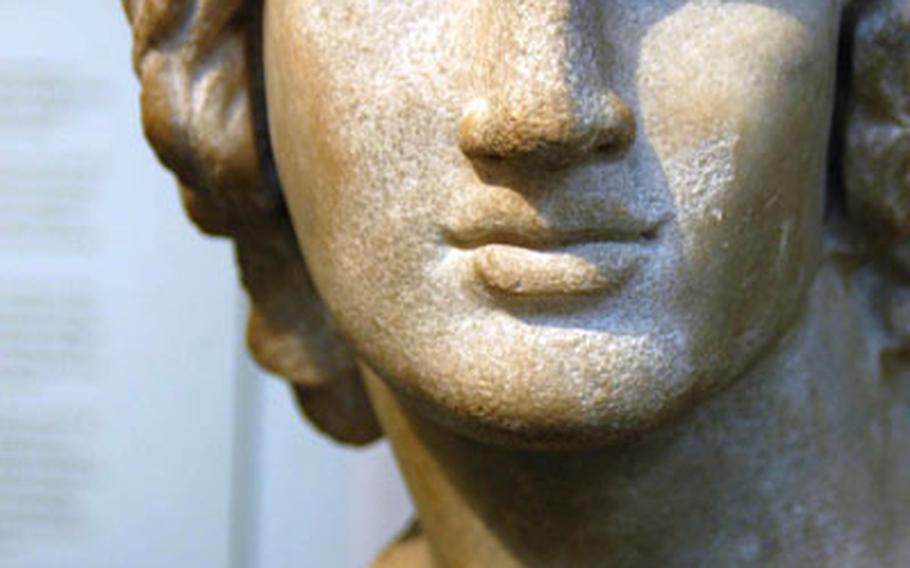 A bust of Alexander the Great, the legendary Macedonian conqueror, cast in his traditional half-turned pose. (Ben Murray / S&S) 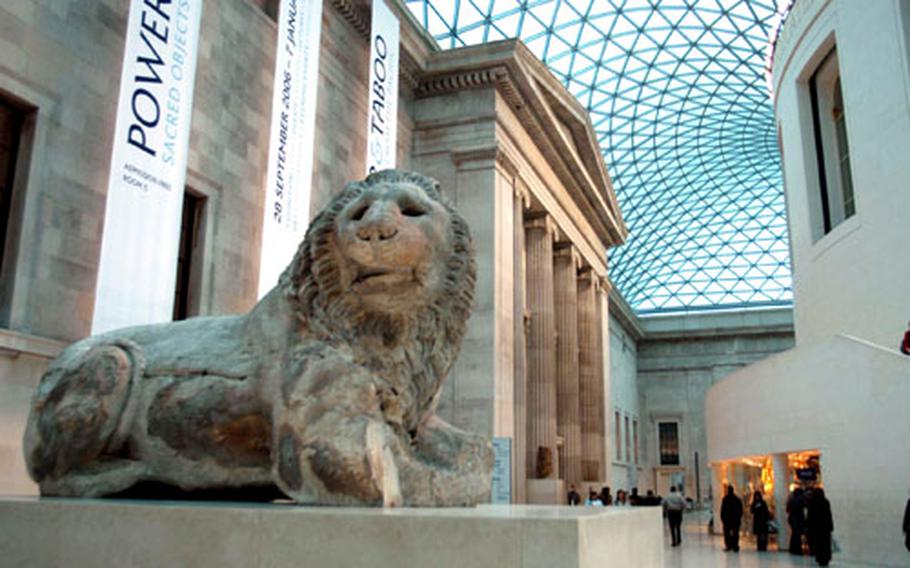 A statue of a lion greets visitors in the cavernous Great Court in London&#39;s British Museum. (Ben Murray / S&S)

LONDON &mdash; In a way, the immensity of the British Museum in central London makes sense.

When attempting to canvass the history of the world&rsquo;s major civilizations through their statues, carvings, art and weapons, it follows that you&rsquo;re going to need a pretty big building.

And if there&rsquo;s one adjective that encompasses the British Museum&rsquo;s endeavor to make the artifacts of ancient peoples available to the public (for free, nonetheless), it is &ldquo;exhaustive.&rdquo;

That makes the name of the place a touch misleading. But for anyone interested in human history from around the globe, the British Museum is a trove of relics on par with the biggest and best in the world.

To start a tour of the museum, visitors would do well to stop at the information booth in the central Great Court &mdash; an echoing indoor open space that makes up the heart of the building &mdash; to pick up a map and plot an assault on the place.

If a jaunt through one of the rotating special exhibits is on the list for the day, tickets also can be bought at the information booths, but most of the galleries are free and open to photography.

From the Great Court, visitors then can simply pick a civilization &mdash; from the ancient Japanese to the Plains Indians to the Assyrians &mdash; and head for the respective gallery, where rows of sculpture, art and items from everyday life are set up in large, often labyrinthlike corridors.

Of the galleries, the Greek, Roman and Egyptian areas stand out for their enormous breadth and the sheer size of the displays the museum has managed to erect. In the Greek area, an entire temple has been rebuilt along with long sections of friezes depicting great mythological battles and a section of massive statues from the Parthenon in Athens.

There are also multitudes of busts, jars and frescoes adorned with the images of various gods, heroes and leaders, plus items from daily life such as jewelry, tools and vases.

In the Egyptian area, the museum attempts to relate the colossal scale on which the ancient civilization constructed its tombs and monuments and holds a great number of mummies and the artifacts associated with the preservation of the dead. Great stone heads the size of compact cars on pedestals look down at passersby as they navigate through heavily decorated sarcophagi and the sculptures of myriad gods and pharaohs.

In one area, not too far from the famed Rosetta Stone, just the arm of one of Egypt&rsquo;s giant statues sits at waist level, as long as an Escalade and with a fist the size of its engine.

The three areas are some of the largest and most popular portions, but they are by no means the end of the displays at the British Museum.

Split into three levels, there are sections on Korea, Mesopotamia, Medieval Europe, China, North America and others, plus &ldquo;theme&rdquo; areas focusing on topics such as the Enlightenment, &ldquo;living and dying&rdquo; and others.

Recent special exhibits included &ldquo;Power and Taboo,&rdquo; a gallery dedicated to sacred objects from Pacific nations, and &ldquo;The Past From Above,&rdquo; a collection of aerial portraits of famous historical sites.

Taken as a whole, the British Museum can tend to get a touch repetitive as visitors pass through row after row of relics and carvings, plates and vases, and trying to see it all at once can be physically draining.

But for the price of admission at the British Museum, you can afford to make more than one trip.