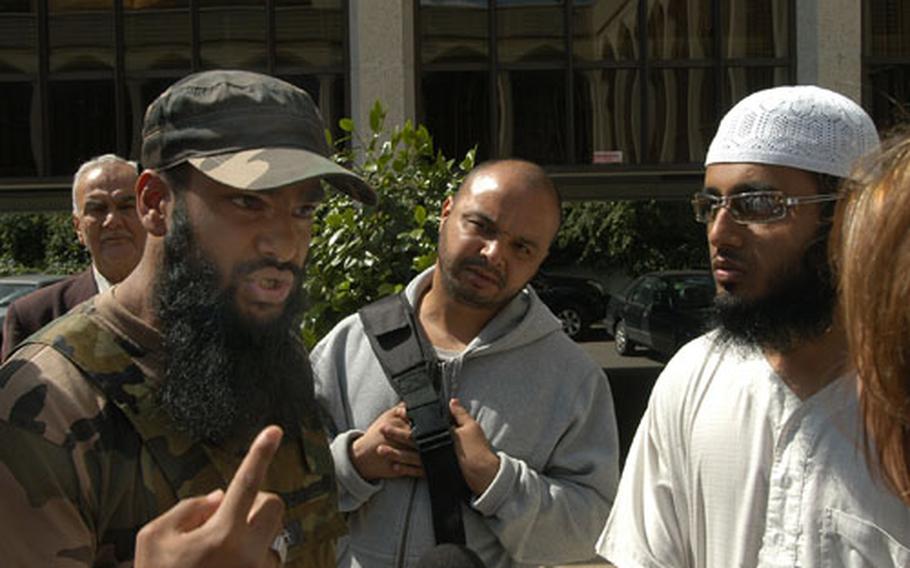 Abu Farooq, 22, left, speaks passionately about his perceived oppression in Britain outside London&#39;s Islamic Cultural Center. Farooq, and his comrade in white, Abu Samaha, 25, were two of the roughly two dozen young Muslim men who were excluded from the conference for what they say are their radical views. (Bryan Mitchell / S&S)

Abu Farooq, 22, left, speaks passionately about his perceived oppression in Britain outside London&#39;s Islamic Cultural Center. Farooq, and his comrade in white, Abu Samaha, 25, were two of the roughly two dozen young Muslim men who were excluded from the conference for what they say are their radical views. (Bryan Mitchell / S&S) LONDON &#8212; A conference hosted by a prominent British Muslim organization designed to unify efforts to thwart terrorism devolved instead into a media spectacle that highlighted the sharp divisions in Britain&#8217;s embattled Muslim community.

Inside the capital&#8217;s Islamic Cultural Center, the Muslim Council of Britain on Saturday welcomed dozens of Muslim academics, community leaders and officials from the British security forces to collaborate in the fight against terror.

Outside the building, in a courtyard surrounded on three sides by the Regents Park Mosque and the cultural center, dozens of mainly young, Muslim men charged vehemently that they were excluded from the meeting for their radical views.

Following the Muslim Council of Britain&#8217;s ejection of all journalists from the scheduled two-hour conference after 30 minutes of introductory speeches, the group of fiery young protesters succeeded in stealing the media spotlight with spirited rants against their perceived oppression in Britain coupled with thinly veiled justifications for terrorism.

The conference and its protesting sideshow came during a period of heightened tension in the United Kingdom following the recently foiled car bombing plots in London and the flaming car that smashed into the security barriers at Glasgow&#8217;s airport. Eight suspects have been arrested; the majority have ties to the country&#8217;s National Health Service.

The conference was also held two years to the day after the July 7, 2005, London transport bombings that claimed more than 50 lives and woke the nation to its home-grown terror threat.

The fact that suicide bombers, reared in the Midlands and Yorkshire, conspired to kill dozens of Britons has failed to deflate the county&#8217;s robust national character.

While the Muslim Council of Britain and its guests discussed in private their plans to combat terror, hundreds of thousands throughout London cheered on the prologue to the Tour de France, watched Venus Williams capture a fourth Wimbledon title or rocked out to Genesis and the Red Hot Chili Peppers at the Live Earth concert.

At the start of the summit, Ahmad Al-Dubayan, director of the Islamic Culture Center, and Mohammad Abdulbari, secretary general of the Muslim Council of Britain, welcomed attendees with candid talk of the threat from within the Muslim community and solicited cross-cultural solidarity in the fight against terror. &#8220;The Quranic verses make it clear that those who seek to hurt or kill innocents are the enemy of us all,&#8221; Abdulbari said. &#8220;The safety and security of our society is non-negotiable.&#8221;

Abdulbari represents a group that counts roughly 500 mosques across the U.K. as affiliates and provides spiritual guidance to many of Britain&#8217;s 1.6 million Muslims.

But the men excluded from Saturday&#8217;s conference rejected the council&#8217;s perceived authority, lashing it with allegations of censorship and false representation.