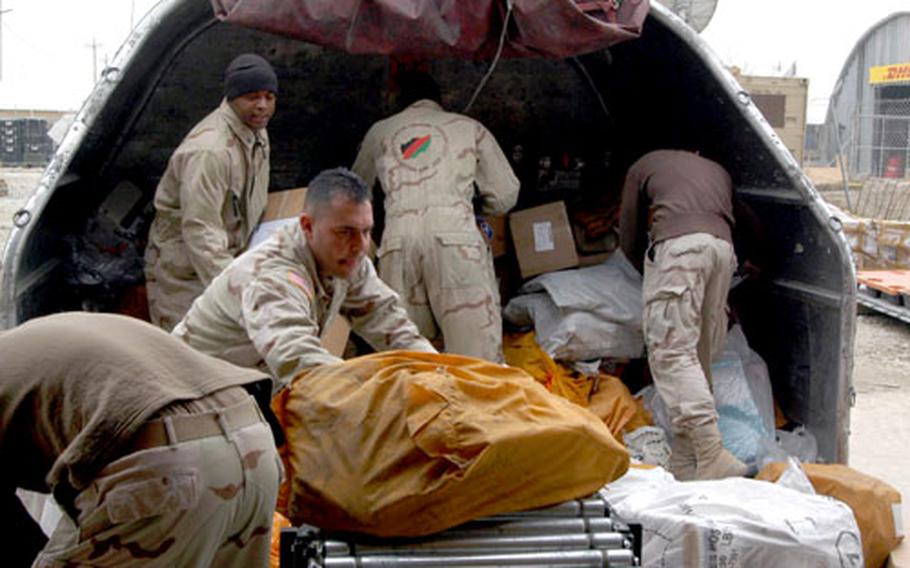 Soldiers deployed with the Joint Logistics Command at Bagram Air Base, Afghanistan, empty incoming mail from a truck Monday. Members of the JLC have supplied the Combined Joint Task Force-76 with a wide range of services during their yearlong stints in country. (Kent Harris / S&S)

BAGRAM AIR BASE, Afghanistan &#8212; Helping run a dining facility in Kaiserslautern, Germany, doesn&#8217;t prepare you to provide three meals a day to about 30,000 Americans in locations across Afghanistan.

&#8220;I was completely out of my field,&#8221; he said Monday, looking back at his first days as the noncommissioned officer in charge of ensuring food is distributed to the dozens of U.S. facilities in country.

Denson, who began the deployment after a stint as assistant manager at the Rhine Ordnance Barracks dining facility, had to learn on the job. And do so quickly. People need to eat. And the commander of Combined Joint Task Force-76 wanted them to eat well.

So Denson adjusted. He said he visits forward operating bases to see how servicemembers are eating and to make sure they&#8217;re getting the food they need.

According to the commander of the Joint Logistics Command, Denson is only one example of the efforts put forth by the 800 or so servicemembers that have performed a variety of largely thankless jobs. Many are doing so in roles unfamiliar to them in their home bases in places such as Kaiserslautern, Mannheim and Hanau.

&#8220;No matter how much training you do, there are always going to be those little twists and turns in the road,&#8221; said Col. Walter Sawyer, commander of the 29th Support Group and the JLC.

And Sawyer said there have been more than a few twists for logisticians to overcome during their stints in Afghanistan. Flooding devastated some communities in Afghanistan early on, but that was nothing compared to an earthquake in Pakistan that killed thousands. Fuel truck workers went on strike. There were problems at the Pakistan border. The U.S. was told it was no longer wanted in Uzbekistan, so JLC personnel packed up the base known as K2 and are still taking parts of it to sites across the theater.

The JLC has handled food, fuel, ammunition, mail, vehicle parts. &#8220;We have had our hands into everything,&#8221; said Maj. Chris Whittaker, distribution management chief.

Sawyer said while most of those in his command are soldiers, he also has sailors, airmen and Marines.

Some have spent most of their time at the same location. Others, such as Sgt. Dilliun Emerson, have traveled around quite a bit. Emerson is a chaplain&#8217;s assistant and has helped conduct services at a variety of bases. At a variety of times.

1st Lt. Lisa Neumann knows about people getting together. She and the others assigned to the postal service all pitch in to get huge volumes of mail out to the troops. She said the volume of mail that passes through Bagram is greater than what passes through Heidelberg and Mannheim combined during a comparable period.

With various units starting to leave Afghanistan, that load has increased recently. Lines outside the postal complex at Bagram are common these days. Soon, members of the JLC will be shipping back more stuff of their own.

Like much of CJTF-76, they&#8217;ll soon be replaced by elements of the incoming 10th Mountain Division. So the next major logistics mission might be getting all the command&#8217;s personnel and equipment back home.