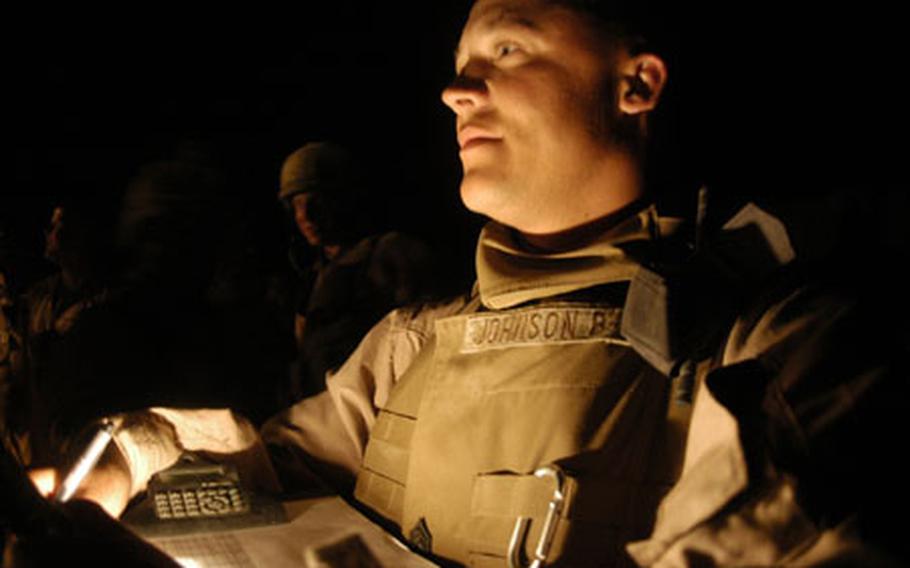 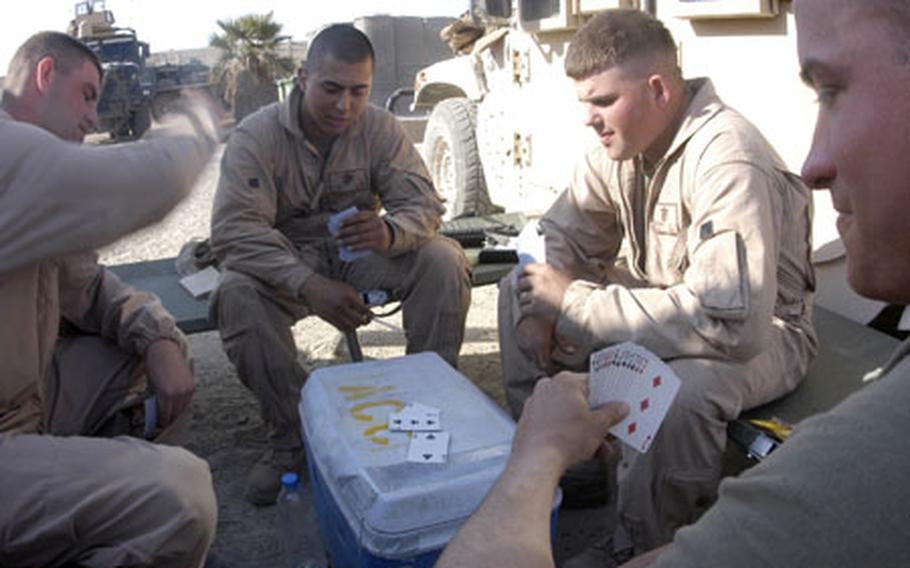 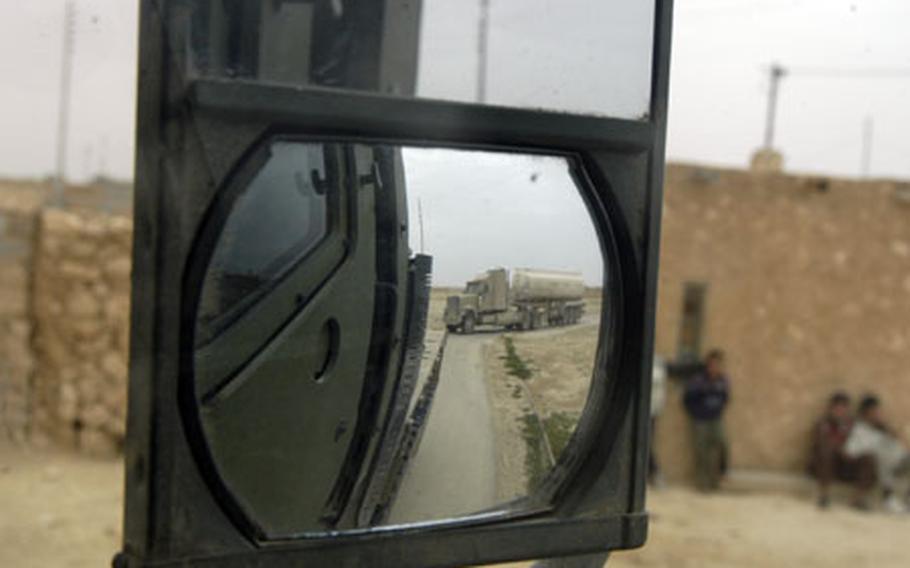 A KBR truck pulling a fuel tank is seen in the review mirror of a seven-ton U.S. Marine Corps truck, which stopped in a small town Saturday near camp al Qa’im to provide security for a 41-truck convoy mission. (Sandra Jontz / S&S) 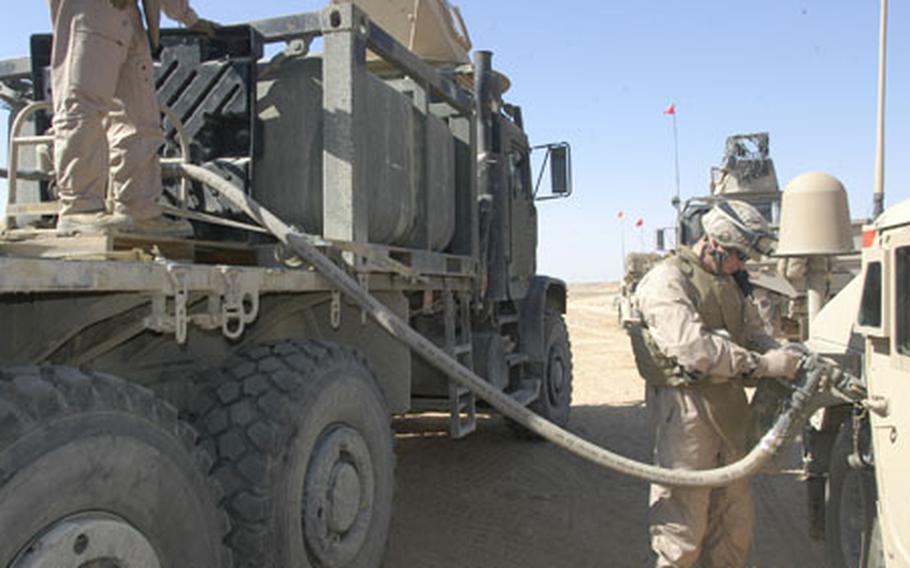 A Marine with Security Company, Combat Logistics Battalion 2, refuels a Humvee at a small camp near al Asad Air Base. Security Company Marines drive between 700 and 800 miles during each 72-hour patrol on key roadways, scanning for roadside bombs or those who might try to plant them. (Sandra Jontz / S&S) 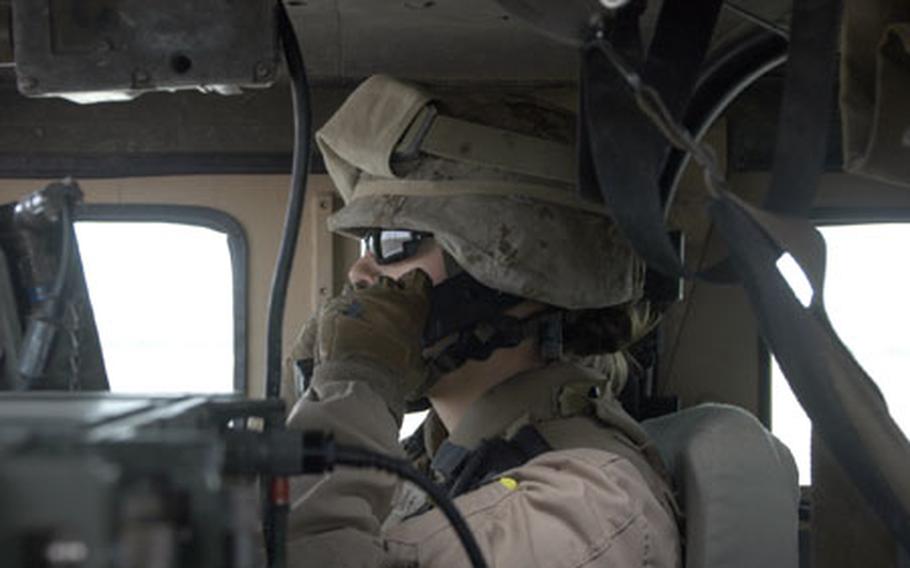 Second Lt. Heather Ichord, convoy commander with 2nd Platoon, Transportation Support Company, Combat Logistics Battalion 2, talks on the radio during a convoy mission that started Friday morning from al Asad Air Base to Camp al Qa’im, near the Syrian border. The mission lasted two days, and had Marines on some of Iraq’s most dangerous roads from more than 16 hours combined. (Sandra Jontz / S&S)

AL ASAD AIR BASE, Iraq &#8212; &#8220;Brilliance is in the details,&#8221; Capt. Tom Warren told his Transportation Support Company Marines after they successfully completed a two-day resupply convoy between Al Asad Air Base and Camp al Qa&#8217;im, near the Syrian border.

The company&#8217;s role is one puzzle piece of Combat Logistics Battalion 2, from Camp Lejeune, N.C., now deployed for a third time to the logistical hub on the former Iraqi air base at Al Asad.

The battalion&#8217;s primary mission is to supply troops in the field with food, water, ammunition, fuel, and mechanical parts, via ground convoys or fixed- and rotary-wing aircraft flying throughout Anbar province. The convoy missions stretch northwest toward the Syrian border and even further to the tiny Korean Village forward operating base near the Jordanian border to the southwest.

They treat each run as if it were their first, and Marines huddle around their convoy commanders to listen to an hourlong, detailed safety briefing as though they&#8217;d never heard the message before.

But they have. And often, they recite in unison the very tactics that can save their lives.

With some convoys traveling upward of 500 miles round trip &#8212; amounting sometimes to 18 hours one way &#8212; on some of Iraq&#8217;s most dangerous roads, Marines of the battalion&#8217;s transportation and security companies encounter mines, roadside bombs, pothole-covered roads, and sniper and small-arms fire.

Half of the Marines hang out in a dank, one-room stone shelter or keep 360-degree watch from the turrets of their Humvees, while the other half patrols roadways for bombs or for those trying to plant them, he said. The Marines log upward of 700 to 800 miles on their Humvees during their 72-hour patrol missions.

Originally, Lance Cpl. James Lara, 21, with 3rd Platoon, Transportation Support Company, wanted to be an infantryman, but feels fortunate he works with the logistics side of the Corps, he said.