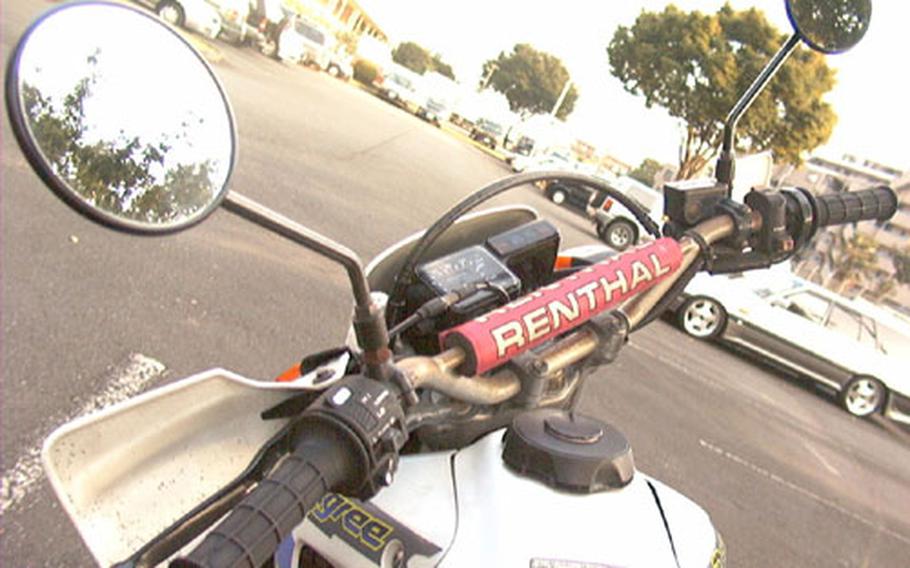 Several off-base thefts of servicemembers&#39; motorcycles have been reported in the Atsugi area in the last year. Motorcycle owners are being warned to park their bikes on base, if possible, and equip them with security alarms. (Jennifer H. Svan / S&S)

A civilian employee at NAF Atsugi who lives off base, Anderson secured his newly purchased Harley-Davidson with heavy-duty chains. The front forks, ignition, front disk cable, front tire &#8212; all were locked.

Even a razor-sharp saw couldn&#8217;t slice through the Kryptonite lock that cost him more than $250.

But in the first week of January 2003, when Anderson returned home from work, his cherished Hog was gone.

Anderson is among a handful of sailors and civilians assigned to NAF Atsugi who are victims of a recent string of off-base motorcycle thefts, say base police.

Thieves are targeting mostly newer motorcycles. Of the seven bikes stolen in the last year, three were Harleys with a combined price tag of about $60,000. The others were sports bikes. &#8220;All but one of the motorcycles were locked with more than one lock,&#8221; Blair said.

Blair said he doesn&#8217;t recall any stolen bikes being recovered.

Personnel sponsored under the U.S.-Japan Status of Forces Agreement must report an off-base motorcycle theft to both military and Japanese police, the latter of which has jurisdiction over any investigation.

Most of the thefts from SOFA personnel took place within a six-mile radius of NAF Atsugi, in cities such as Yamoto, Ayase and Ebina, Blair said.

The thieves appear to be professionals, Blair said, since they move fast and aren&#8217;t deterred by expensive locks.

A Yamato police spokesman believes organized crime is to blame for a recent spike in stolen Honda 90cc &#8220;Cub&#8221; motorcycles from Yamato and Ayase cities.

The bikes are popular in foreign countries and most likely are being sold overseas, he said.

An Ebina police spokesman said he hadn&#8217;t heard of any stolen motorcycles from SOFA personnel in Ebina City. He said though Harleys or sports bikes may be stolen occasionally, such thefts are uncommon.

More than eight months after his bike was pilfered, Anderson is frustrated both by what he perceives as Japanese law enforcement&#8217;s lack of interest and the Navy&#8217;s inadequate restitution policy.

Commander, Naval Forces Japan provides no redress for motorcycle theft, said spokesman Jon Nylander. But under the Military and Civilian Personnel Claims Act, servicemembers and appropriated-fund civilian employees may apply for a maximum payment of $3,000 &#8212; or the fair market value of the bike, whichever is less &#8212; for a stolen motorcycle, Nylander said. Certain conditions must be met, including that the motorcycle was locked to a fixed object and the owner&#8217;s insurance and registration were current.

The Navy&#8217;s office of claims, investigations and tort litigation in Washington denied the waiver, noting that Anderson owned a second motorcycle. Anderson appealed the decision to the same office in April but hasn&#8217;t gotten an answer.

&#8220;The loss of a motorcycle is probably one of the most frustrating experiences anyone can imagine ... and then nobody seems to care,&#8221; he said.

Anderson said the Navy&#8217;s restitution policy is unfair to bike owners in Japan, where Japanese insurance companies do not sell motorcycle theft insurance. Japanese motorcycle dealers are authorized to offer it for new bikes only; even then, Anderson said, the policy is short-term and reimburses only up to 80 percent of the vehicle&#8217;s retail value.

Anderson added that he also doesn&#8217;t believe the military is doing enough to warn motorcycle owners of the theft problem, saying, &#8220;The word isn&#8217;t getting out as to how to protect your bike.&#8221;

Nylander said CNFJ, NAF Atsugi and all other bases throughout Japan advise on- and off-base residents to lock up their personal property and exercise other due precautions against theft. He said Japanese neighborhoods generally have a neighborhood association and a koban &#8212; a police box or small police station &#8212; in the area. &#8220;Personnel living off-base are at liberty to contact the neighborhood associations and the local police boxes to request assistance,&#8221; Nylander said.

Blair suggested motorcycle owners park their bikes on base, if possible. Off base, he recommended, &#8220;lock it up in a well-lit area&#8221; to something solid, such as a concrete barrier, and equip a motorcycle with a security alarm.

Shozo Sato of the Motofoot bike shop near NAF Atsugi said most security alarms cost about $175 and go off even when a bike &#8220;moves or shakes a little.&#8221;