Buy Photo
An F-35 Lightning II flies away from Spangdahlem Air Base, Germany, June 18, 2019. The Defense Department has awarded Lockheed Martin an additional $2.4 billion to provide spare parts for the aircraft. (Brian Ferguson/Stars and Stripes)

Buy Photo
An F-35 Lightning II flies away from Spangdahlem Air Base, Germany, June 18, 2019. The Defense Department has awarded Lockheed Martin an additional $2.4 billion to provide spare parts for the aircraft. (Brian Ferguson/Stars and Stripes) 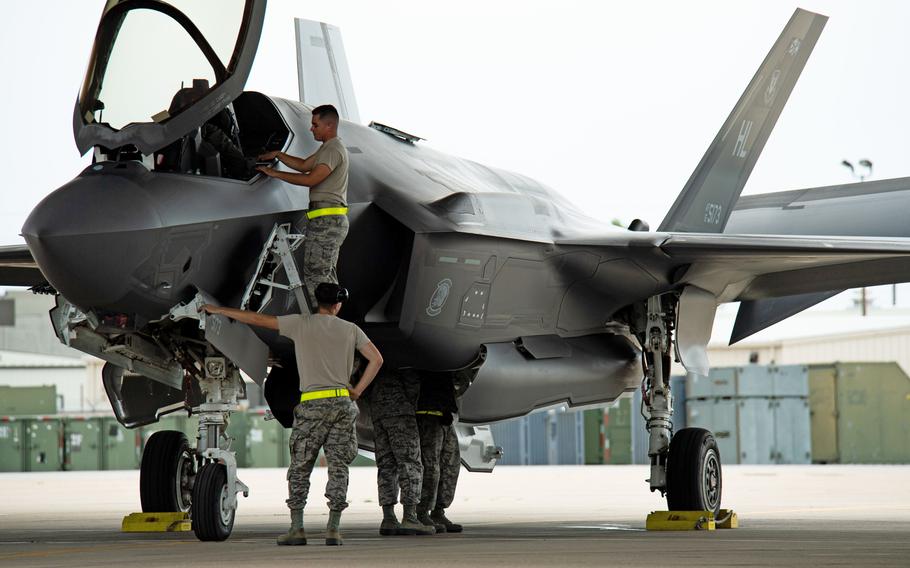 The Pentagon awarded Lockheed Martin an additional $2.4 billion to provide spare parts for the F-35 Lightning II Joint Strike Fighter, after a government watchdog found earlier this year that a parts shortage kept them grounded and forced squadrons to “cannibalize” jets to keep others flying.

The procurement announced last week was made after commanders in the field requested more spare parts, said Michael Land, a spokesman for the Joint Strike Fighter program.

“These spare parts are delivered to support aircraft upon their initial delivery into the fleet for continued daily flying operations,” Land said.

Officials modified a previously awarded contract to speed up the process and provide greater contracting flexibility, he said.

The modification includes parts for the Marine Corps, Navy, Air Force and other participants, including foreign military customers, the Pentagon said on Friday.

The added funding “is an important step” to increasing the availability of spares, enhancing the military’s ability to employ the F-35 and reducing its costs, Lockheed Martin spokesman Michael Friedman said in a statement to Inside Defense.

For the Lockheed Martin-produced F-35s, which first deployed in combat this spring, working through maintenance issues overseas has been a challenge, particularly the resupply of spare parts in a timely fashion.

A lack of parts and difficulties managing and moving them kept the aircraft grounded 30% of the time during an eight-month period last year, the Government Accountability Office said in a report this spring, documenting a host of flaws in the Pentagon’s efforts to establish an effective and accountable supply chain.

To keep F-35s flying, some squadrons were pulling working parts from other grounded aircraft at “rates of cannibalization” six times higher than service targets, rather than wait for replacements or the backlog of parts repairs, GAO found.

Instead of owning the parts outright, the three U.S. services and eight international partners share a global pool of parts managed by Lockheed Martin. But GAO found the Pentagon lacked documentation of its parts purchases, didn’t know where all of its parts were located or how much the services paid for them.

Considered the Pentagon’s most expensive weapons program, the F-35 has long been dogged by delays and cost overruns, and GAO warned that without fixes to supply and maintenance issues, it could fall short of supporting critical national defense missions.

The Pentagon and military services were considering “the potential for a significant shift in DOD’s F-35 sustainment strategy,” GAO said, and officials told the auditing agency they were trying to increase the quantity and reliability of the most troublesome parts.

Canopies, lights “and things that you would have expected to last longer,” were in high demand for F-35s with the 421st Fighter Squadron deployed to Germany this summer, Col. Michael Miles, 388th Maintenance Group commander, told Stars and Stripes in June.

But aircraft in Europe and those deployed downrange have top priority with the Air Force for spare parts, and officials with the 421st, based out of Utah’s Hill Air Force Base, said they had a combination of options—spares they brought with them, parts from Lockheed Martin’s global supply chain and items they had worked with European partners to get.

Under the latest contract modification, all parts orders are expected to be placed no later than December 2020, a Pentagon statement said.