The Pagat area on Guam’s eastern side provides popular swimming and diving spots in the summer and good fishing year round. The U.S. military has proposed building three firing ranges – part of plans to move more than 9,000 troops to the island - just north of the area on land controlled by the government of Guam. The ranges would most likely mean limited access to more freshwater caves and land north of this shoreline. (Teri Weaver / S&S)

The Pagat area on Guam’s eastern side provides popular swimming and diving spots in the summer and good fishing year round. The U.S. military has proposed building three firing ranges – part of plans to move more than 9,000 troops to the island - just north of the area on land controlled by the government of Guam. The ranges would most likely mean limited access to more freshwater caves and land north of this shoreline. (Teri Weaver / S&S) 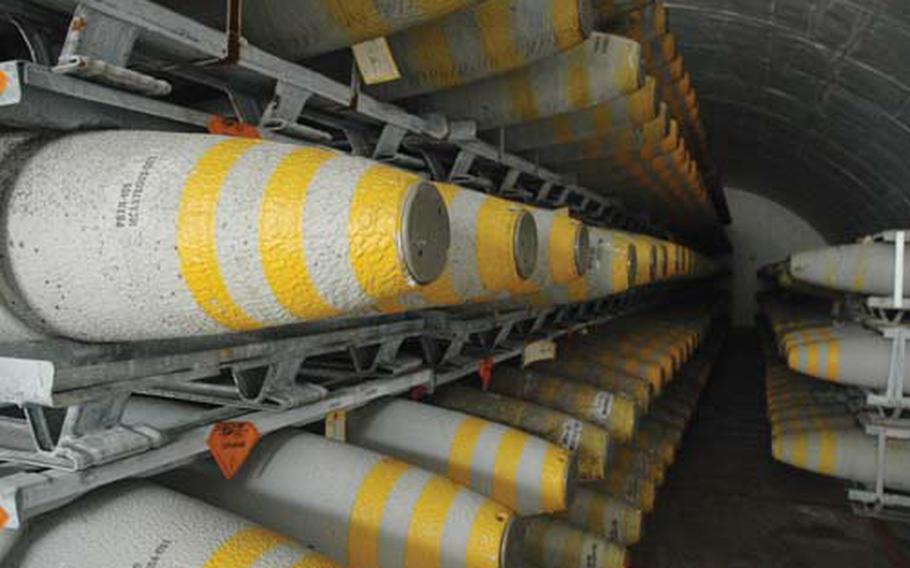 The military controls about one-third of the 212-square-mile island, including 8,800 acres of ammunition storage for the Navy toward Guam’s southern end. These 1,000-pound bombs are ammunition for the 5th and 7th U.S. fleets in one of 129 earth-covered magazines at the Navy Munitions Command. (Teri Weaver / S&S) 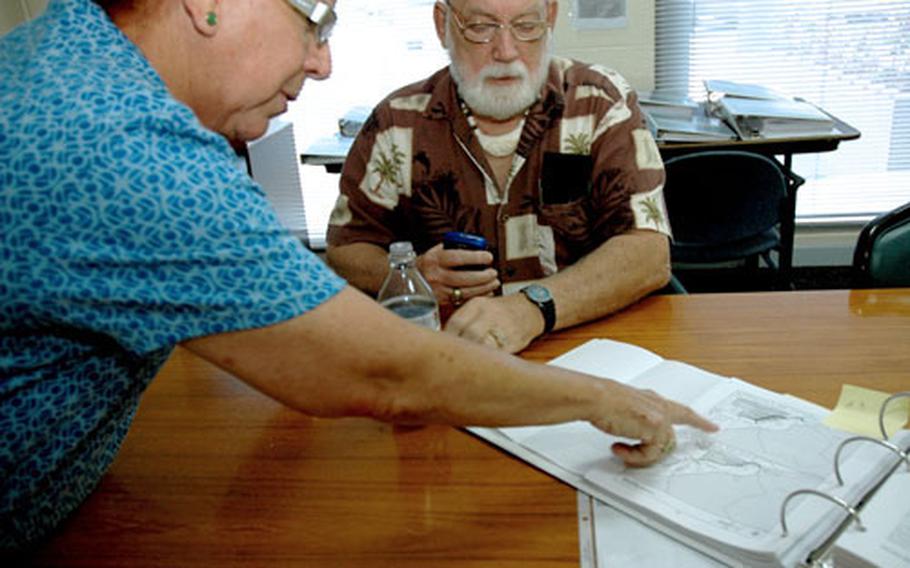 Guam Sen. Judith Guthertz, who chairs the legislative committee on the buildup, looks at part of the military’s proposal with her chief of staff, retired Navy captain Richard Wyttenbach-Santos. Guthertz has requested the military take another look at its own land – including the 15,000 acres it has at Andersen Air Force Base – before asking to buy or lease Guam-controlled land. (Teri Weaver / S&S) The hotels and the military control access to some of Guam’s beachfront, like this area at Ritidian Point just on the outside of Andersen. The beach is controlled by the U.S. Fish and Wildlife Service, which allows access to the sand but not the water during the day. Tourists, like this family from South Korea, come to visit, take photos and look for crabs. (Teri Weaver / S&S) Andersen Air Force Base — a post with no home squadron and 15,000 acres of land that includes a golf course, a recreational beach and a planned wildlife preserve — that has drawn recent criticism from local residents and leaders. Brig. Gen. Philip Ruhlman, commander of the 36th Wing and Andersen, says the space is needed, in part, for storing 19 million pounds of munitions and for response plans in case of crises or war. (Teri Weaver / S&S)

MANGILAO, Guam &#8212; As the U.S. military makes preparations to add at least 9,000 troops to Guam, Glenn Nelson wonders how close they&#8217;ll be coming to his driveway.

It&#8217;s there the military wants to add three ranges to train on live firing, from pistols to .50-caliber guns.

And it&#8217;s that proposal for more land &#8212; plus another to acquire acreage on the western side of the island for Marine housing &#8212; that is at the heart of many arguments from island residents about the military&#8217;s plans.

The military plans to move 8,600 Marines from Okinawa to Guam, a $10.27 billion project partially funded by the Japanese government. Plans also include the addition of an Army unit. As the United States continues to work with the Japanese on the move, residents and leaders on Guam are asking the military to reconsider its plans to use more of the island.

Land is a sensitive issue for a place where some people remember how their parents and grandparents ceded or sold land, often reluctantly, to the U.S. military before and after World War II. The military holds nearly one-third of the island&#8217;s 212 square miles, including the northern end for Andersen Air Force Base, much of the natural port at Apra Harbor and another 8,800 acres in the middle of the island that stores millions of pounds of munitions for the Navy&#8217;s 5th and 7th fleets.

Those bullets, bombs and missiles are the military&#8217;s stockpile for crises and contingencies, as are the mostly empty flight lines at Andersen, military officials on Guam say.

It&#8217;s Andersen &#8212; a base with no home AIR squadron and 15,000 acres of land that include a golf course, a recreational beach and a planned wildlife preserve &#8212; that has drawn more recent criticism from local residents and leaders.

On Thursday, the chairwoman of the Guam Legislature&#8217;s military buildup committee sent an eight-page proposal to the Navy office in charge of the buildup, asking officials to consider rearranging weapons stockpiles on Andersen and looking harder at its own recreational beach for firing ranges.

&#8220;The Navy needs to put on its thinking cap about this matter and be open-minded,&#8221; Sen. Judith Guthertz wrote to the military&#8217;s Joint Guam Program Office.

Marine Corps Capt. Neil Ruggiero, a spokesman for the program office on Guam, said Thursday that his office had received the proposal. He said it would likely take a week to get a reply from the program&#8217;s headquarters office in the Washington area.

David Bice, a retired Marine major general now in charge of the buildup plan, said in an interview Jan. 8 that earlier proposed plans included more use of military lands for the ranges. But he said that would mean more Marines would be driving around the island each day, additional traffic that local leaders have said they don&#8217;t want.

Bice said the military has approached only three private landowners for the entire buildup. While he declines to name them, he said he is confident there will be no problems with land transactions.

But the military also is looking at land controlled by the government of Guam, including that swath north of the Nelsons&#8217; home. To get a hold of that land, the Guam Legislature must either approve the land deal or force the military to use eminent domain proceedings. Nearly every leader on the island, including Bice, has said they do not want things to come to that.

Earlier this month, Air Force Brig. Gen. Philip Ruhlman, commander of the 36th Wing and Andersen, said some of the base&#8217;s land that looks unused now is needed for response plans in case of crises or war.

The base also hosts routine deployments of U.S.-based fighter, bomber and tanker squadrons, and it&#8217;s the home to the 36th Contingency Response Group, a rapid-deployment unit that can secure and establish airfields.

Another 5,500 acres at Andersen contains more even ammunition for the military &#8212; 19 million pounds valued at $2 billion &#8212; making that land off limits for further buildup, Ruhlman said. The base&#8217;s old airfield, known as the Northwest Field, is being developed as a training center for Air Force security forces on their way to Iraq or Afghanistan, he said.

The undeveloped land on Andersen further complicates things, Ruhlman said. An agreement between the departments of Defense and Interior means that the U.S. Fish and Wildlife Service has oversight of much of the overgrown land on Andersen.

The Air Force environmental unit working under Ruhlman is putting up a 12,000-foot fence to enclose 135 acres to provide a home for endangered or near-extinct plants and birds, including the Guam rail and the Mariana crow. The decision to create that refuge was made more than three years ago, according to Andersen officials, about the same time the United States and Japan announced plans to move the Marines.

Still, the government&#8217;s simultaneous plans to create a habitat for birds while asking for more land for ranges are hard for some residents to take.

The proposed ranges would also limit access to swimming and fishing areas around the Pagat Caves, just north of the Nelson home, according to the military. It&#8217;s this that upsets Desiree Ventura, Glenn Nelson&#8217;s niece who also lives in the family home.

The following clarification to this story was posted January 28:A Jan. 28 story should have said that although Andersen Air Force Base on Guam has no permanently stationed air squadrons, it hosts routine deployments of U.S.-based fighter, bomber and tanker squadrons. It also is home to the 36th Contingency Response Group, a rapid-deployment unit that can secure and establish airfields.