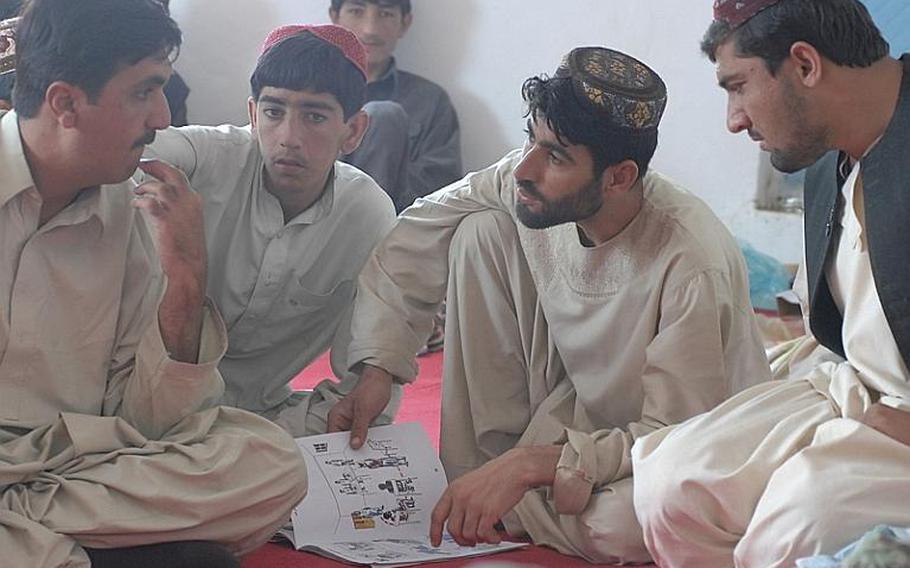 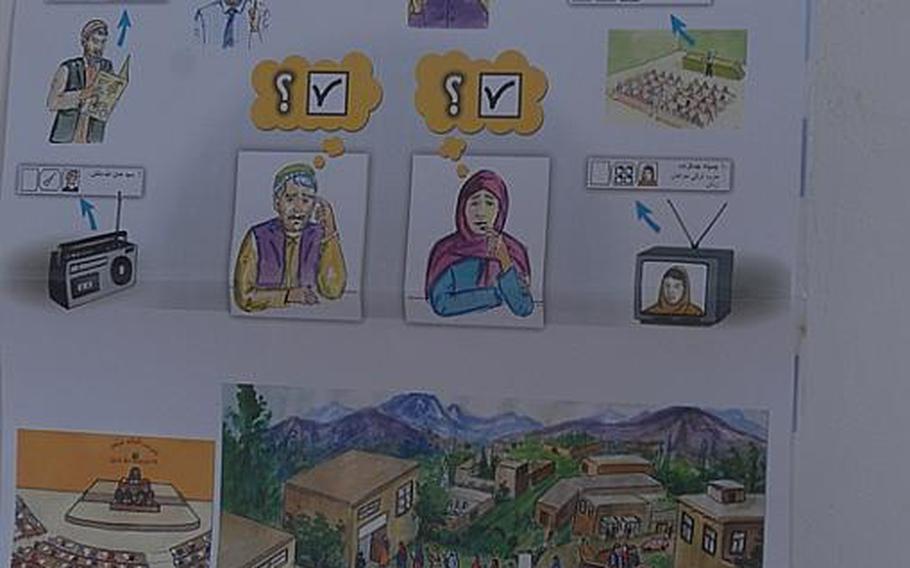 Buy Photo
An election poster at the Shinkai district center in Zabul province, Afghanistan. Election books and posters circulating in the district feature illustrations to make it easier for illiterate local farmers to understand the process. (Seth Robson/Stars and Stripes) 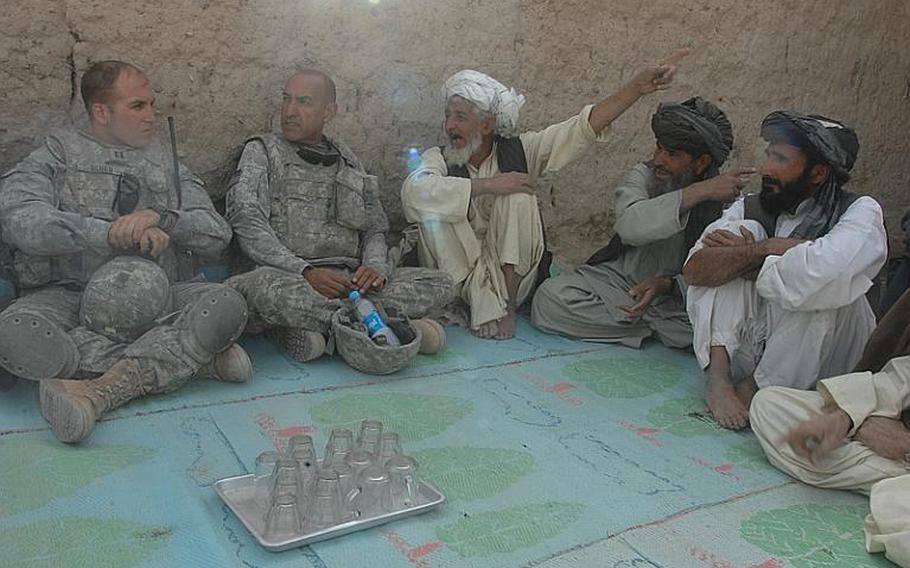 Buy Photo
Capt. Adam Scher, left, sits on a large mat in the shade of a mud wall in the village of Latek, about a 90 minutes drive from Shinkai, drinking tea and talking with a half-dozen farmers about the election. (Seth Robson/Stars and Stripes) 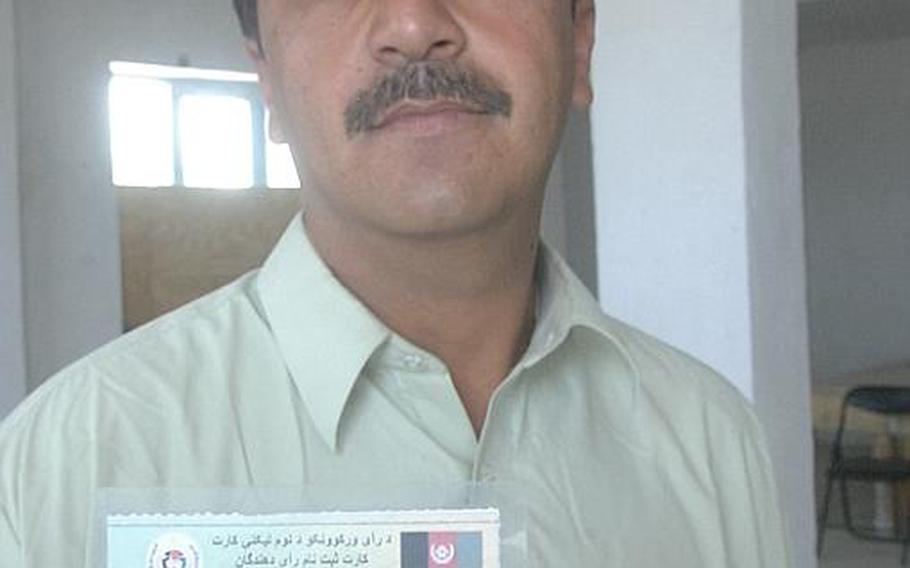 Buy Photo
Mohammed Zaman Khan, 30, of Qalat, leader of a team of Afghans overseeing the elections in Shinkai, said only genuine voter registration cards like this one will be accepted, and that people won?t be able to use fake cards printed in Pakistan and Iran. (Seth Robson/Stars and Stripes) Buy Photo
A man washes his feet in front of the Shinkai district center, which was plastered with election posters in the run-up to Saturday's elections. (Seth Robson/Stars and Stripes) 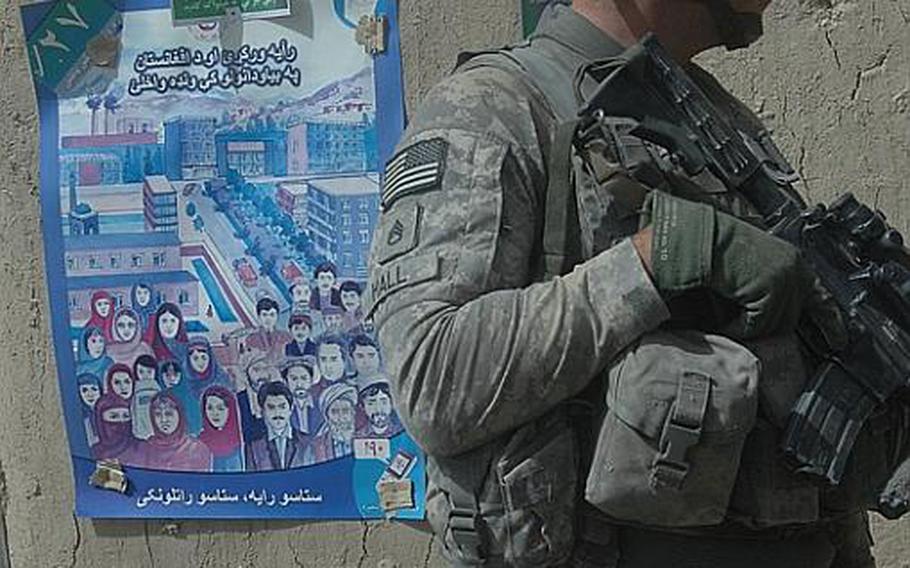 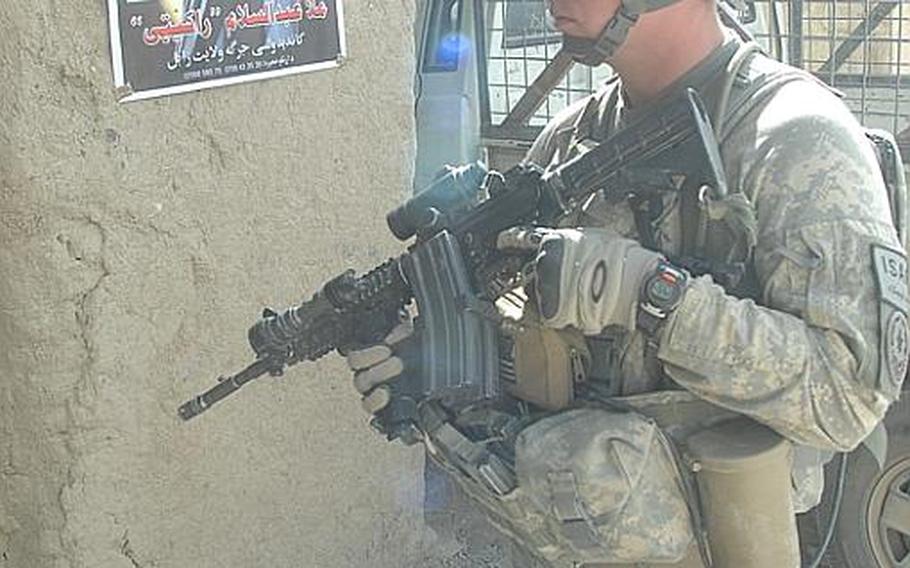 Buy Photo
Sgt. Matthew Weber of the 2nd Stryker Cavalry Regiment passes an election poster during a patrol in the Shinkai district center on Wednesday. (Seth Robson/Stars and Stripes)

ZABUL PROVINCE, Afghanistan &mdash; Posters for candidates line the main street, election officials are in place and ballots are waiting for voters.

Everyone in Shinkai district, near Afghanistan&rsquo;s porous border with Pakistan, knows about the elections, which are being heavily promoted by U.S. and Afghan security forces.

But just how many people will show up to vote, or whether the process will be seen as fair, is still very much in doubt.

On Monday, Capt. Adam Scher, 27, sat on a large mat in the shade of a mud wall in the village of Latek, about 90 minutes&rsquo; drive from Shinkai&rsquo;s district center, drinking tea with a half-dozen farmers while they talked about the election.

&ldquo;We haven&rsquo;t seen the district chief in nine years and nobody has come to this village to give us election cards,&rdquo; complained Mohammad Hasan, 65.

Latek doesn&rsquo;t have electricity, paved roads or a health clinic. The Taliban, who show up at night on motorcycles, forced the locals to close the school years ago, according to its former headmaster, Abdul Raziq.

Scher, commander of Company D, 2nd Squadron, 2nd Stryker Cavalry Regiment, suggested that the farmers visit the district center to get voting cards, but they wanted the documents brought to them and wanted the vote to take place in their village.

&ldquo;We are afraid to go to Shinkai,&rdquo; Hasan said. &ldquo;The Taliban will come from the mountains and kill us.&rdquo;

Afghans go to the polls Saturday to elect a new lower house of parliament. More than 2,500 candidates, including 405 women, are vying for the 249 seats of the Wolesi Jirga, or &ldquo;House of the People.&rdquo;

While the stakes are lower than last year&rsquo;s flawed presidential vote, a report issued this month by the Afghanistan Analysts Network in Kabul states that the election &ldquo;will be messy, fiercely contested and manipulated at all levels.&rdquo;

The report&rsquo;s author, AAN co-director Martine van Bijlert, writes that candidates in unsecure areas will likely revert to the same tactics that they used in last year&rsquo;s presidential and provincial council elections: ballot stuffing or other types of voter fraud.

&ldquo;Although many have learned from the 2009 controversies and will try to make the fraud less detectable, in areas where the contest is fierce and conditions are favorable, the fraud is likely to again be blatant, unsophisticated and widespread,&rdquo; she wrote.

Once ballot stuffing or other voter fraud has occurred, it is nearly impossible to reconstruct the true vote numbers, according to van Bijlert.

On Thursday, a senior White House official acknowledged that fraud could again be a problem, but said U.S. officials have been pleased with the improvements made to curb any such problems. More than 6,000 individuals linked to vote tampering in the last national election have been banned from voting stations this time, and other poll workers are being rotated to new areas to minimize their ability to influence the vote.

Scher tried to convince the farmers that the road to Shinkai was safe and that coalition forces would be guarding it on election day.

&ldquo;We just drove it here today,&rdquo; he said. &ldquo;We have been doing that for a month.&rdquo;

&ldquo;This is a big change since July,&rdquo; he said. &ldquo;Back then, several people from this village knew about an IED [improvised explosive device] that went off but they told us to go away. That they didn&rsquo;t want anything to do with us. Now we are sitting here drinking tea and talking about the government. This is democracy in action.&rdquo;

After spending several hours talking to the farmers in Latek, the soldiers hadn&rsquo;t persuaded them to vote. But they got a commitment from one of the elders to visit the district center to talk about how the government can help them with projects such as new irrigation systems.

On Thursday, Scher met Afghan soldiers, police and election monitors to talk about security on election day. The officials sat on the floor in a room at the district center that was full of election posters and books with illustrations likely to help illiterate Pashtun farmers understand the voting process.

Some of the observers, who included representatives of different candidates, appeared not to trust the officials and complained when discussions in English were not immediately translated into Pashtun.

&ldquo;The security forces must make it safe but we can&rsquo;t run the elections and be involved in politics,&rdquo; he told the Afghans. &ldquo;The district field coordinators and international election representatives will make sure the elections are run fairly and there is no corruption. But the most important part is the people coming here to vote, feeling safe doing it and picking who they believe will best represent them.&rdquo;

Mohammed Zaman Khan, 30, of Qalat, a district field coordinator leading a team of Afghans who will oversee the elections in Shinkai, said he was optimistic that the vote there would be free of the corruption that plagued the last election.

&ldquo;Last year in Shamulzai (the neighboring district) it was very bad,&rdquo; he said. &ldquo;There were no monitors and the voter registration cards were fake. I heard they were made in Pakistan.&rdquo;

This week, The Associated Press reported that thousands of fake registration cards had been printed in Pakistan for corrupt Afghan politicians.

Khan said the fake cards would not be accepted and that everyone who votes must dip their finger in purple dye to prevent them voting twice.

He said he hopes voters turn out in force but acknowledged that security is vital.