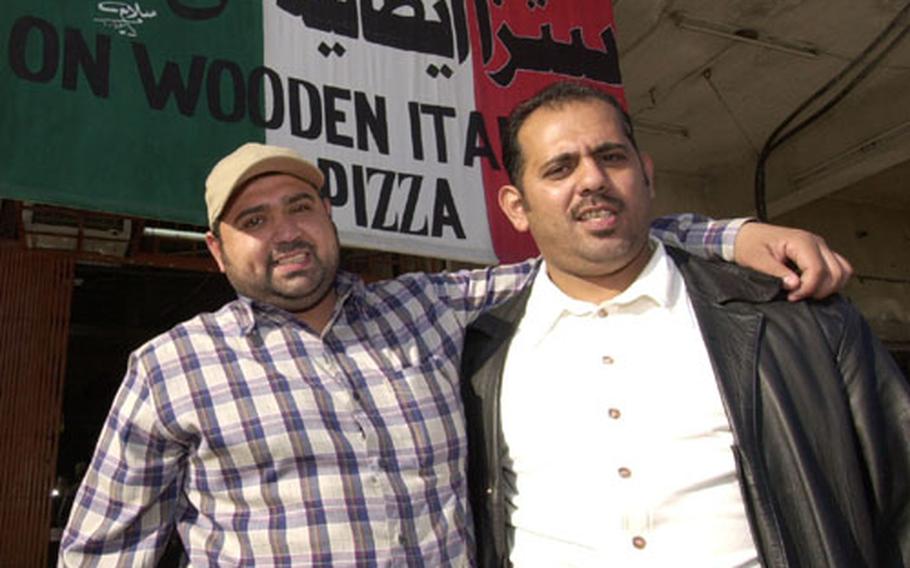 Wa-Il Al-Bayati, left, and Waleed Al-Bayati stand in front of their restaurant after their new windows were installed Monday. (Jim Schulz / S&S)

Wa-Il Al-Bayati, left, and Waleed Al-Bayati stand in front of their restaurant after their new windows were installed Monday. (Jim Schulz / S&S) 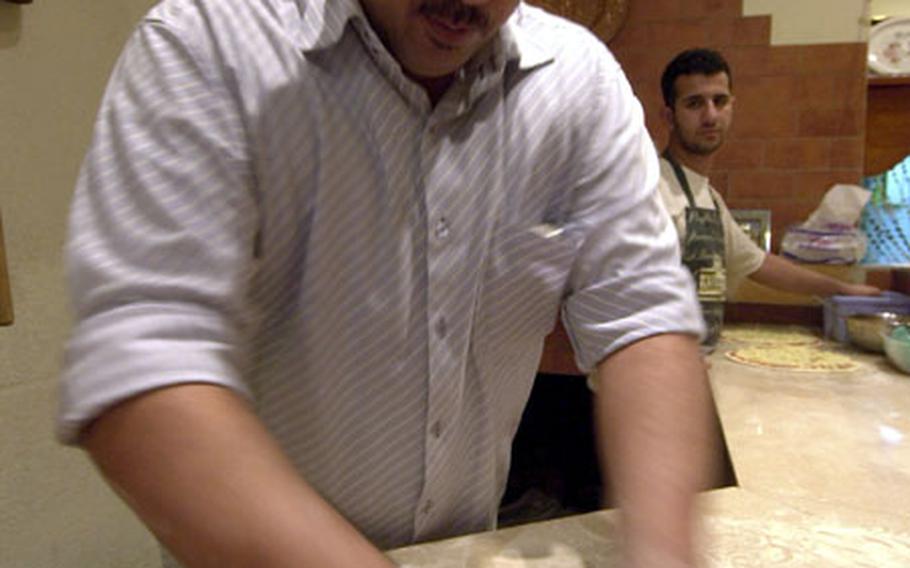 The night before the car bomb, Pizzeria Napoli owner, Waleed Al-Bayati makes the best pizzas in Iraq for the soldiers and hopes for more business in the future as the Iraq economy improves. (Jim Schulz / S&S)

BAGHDAD, Iraq &#8212; As Waleed al-Bayati began repairs to his pizza shop &#8212; just a few hundred feet from where a 1,000-pound car bomb detonated Sunday killing a score of Iraqis &#8212; U.S. troops were asking when they could order pizzas.

A suicide bomber driving a white Toyota pickup truck set off the bomb Sunday morning outside the Assassins Gate, a military checkpoint near the U.S.-led coalition headquarters in Baghdad.

Like many homes and shops along Karadh-Mariam Street, al-Bayati&#8217;s Pizzeria Napoli had its windows blown out by the bomb&#8217;s concussion. The restaurant is a favorite among soldiers, civilians from the Coalition Provisional Authority and the foreign press corps.

The aftermath of the bombing deeply affected local Iraqis, in homes and shops most U.S. troops view only from behind barriers and rolls of concertina wire. Local residents spent Monday cleaning up debris, fixing windows and burying the dead.

Clear numbers on casualties did not surface Monday. Iraqi officials said 31 people died and 120 were wounded, according to Associated Press reports.

Some bodies were burned beyond recognition and investigators are still trying to determine identities. One soldier checking ID cards was knocked down and miraculously got back up while victims around him were incinerated, a senior military official said.

FBI forensics experts conducted a post-blast analysis. More than likely the bomb was composed of about 1,000 pounds of plastic explosives with artillery shells to create shrapnel, the senior military officer said.

Many Iraqis felt the bomber had to be a foreigner, because, they said, an Iraqi would not kill fellow Iraqis. Several locals said they were angry and confused.

Seventeen-year-old Ahmed Rahim was selling groceries at a sidewalk stand Sunday when the bomb&#8217;s shockwave sent him running. He fell and broke his arm. At the local hospital, Rahim saw the wounded and the dead.

In the back streets, behind al-Bayati&#8217;s pizzeria, Iraqis held funerals for the dead. At one wake, men sipped hot coffee under a brightly colored tent and mourned a man named Sargown, a 26-year-old security guard whom they buried Monday morning. He was among six Iraqi security workers subcontracted through DynCorp, a U.S. contractor providing services in Iraq to the U.S. State Department.

Al-Bayati, 38, learned to make pizzas in Rome. He and his brother Wa&#8217;il opened the shop June 27, 2003, hoping to attract soldiers and foreigners. Someone within the U.S. military community even gave al-Bayati a cell phone that runs on a military network within Baghdad. It&#8217;s number is included on his take-away menu, along with 19 varieties of pizzas written in English.

The pizza shop makes deliveries, some of them to the checkpoint across the street, also known by troops as MOAC &#8212; the Mother of All Checkpoints.

On Monday, soldiers were wary of photographs and interviews for fear that they would get in trouble for ordering out. &#8220;But it&#8217;s great pizza,&#8221; said one soldier from the 2nd Brigade, 1st Armored Division, asking not to be identified.

The troops will have to wait a few more days for al-Bayati to reopen, he said. He was still distraught by the devastation and didn&#8217;t feel ready to cook.

He was also concerned with the fate of his cousin, Giyath, 24, whose burnt cell phone was found among the dead.

The pizzeria sustained about $1,000 in damage, including damage to windows, the outside awning and even photos of his beloved Italy. To rebuild, he will spend much more because new materials have inflated prices, al-Bayati said.

Business had dipped before, following earlier attacks in Baghdad. But Sunday&#8217;s car bomb was just a few blocks from his door.

Meanwhile, requests for pizzas from soldiers and the foreign press makes al-Bayati feel better, he said.